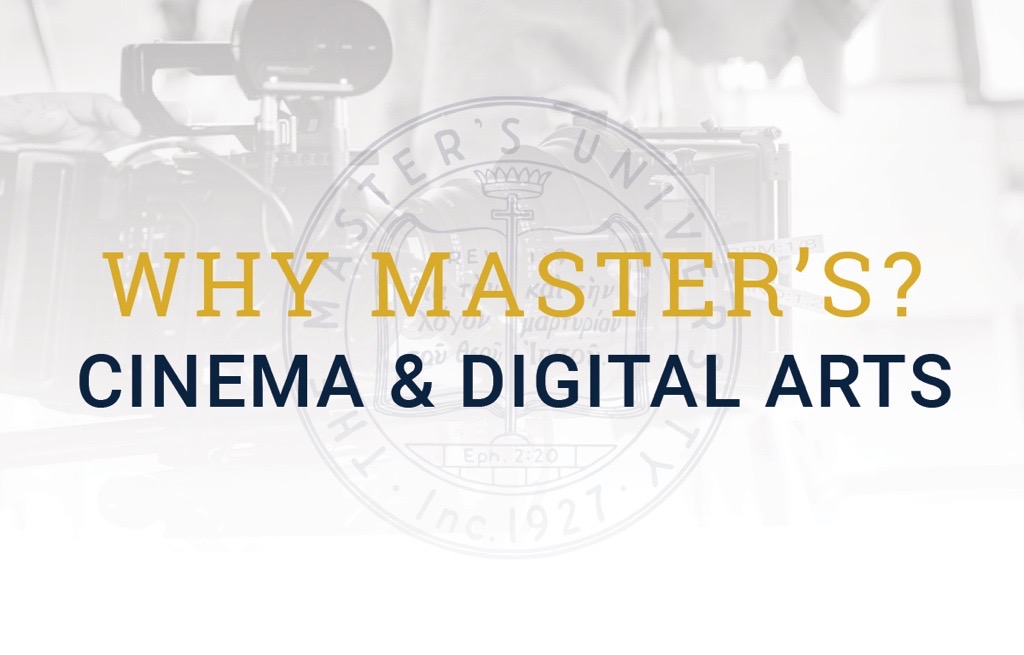 The entertainment industry is one of the world’s most influential platforms. Since their inception, TV and film have played a part in transforming Western culture, and many Christians have observed that these changes aren’t always for the better.

[Professor Matt Green](https://www.masters.edu/faculty/matt-green), who heads up The Master’s University’s Cinema & Digital Arts program, believes in the power of television and film, and he also believes it can be harnessed for good. This passion originated in his own experience in the entertainment industry, which began more than two decades ago.

Green began by working on music videos and was eventually hired as a writer on a kid’s TV show. After a time, the same company asked if he would work on a faith-based feature film it wanted to produce.

“And I said, ‘I don’t want to do a faith-based feature film.’ … But I’ve found that whenever I say I don’t want to do something, the Lord always says, ‘You’re going to do that,’” Green says. He ended up producing the film – “No Greater Love” – which was ultimately quite successful.

“The Lord kind of shifted my perspective through that, and I began thinking, ‘I have these gifts, I have these desires, and I need to be using them to glorify Him,’” Green says. “And that doesn’t mean I can’t do secular content. It just means that I need to always be asking the question, ‘What am I doing with the gifts that He’s given me?’”

Then, six years ago, Dr. Bob Dickson became chair of the communication department and reached out to Green, who is a Master’s alumnus. Dickson was looking for someone with industry experience who could help with the electronic media emphasis, which would later become the Cinema & Digital Arts program.

“I ended up teaching two classes, and I really loved it,” Green says. “I was able to work with these young, hungry students who had a passion for the arts, and who were in the same position that I was years earlier and were asking, ‘How can I use my gifts to glorify the Lord?’”

“Sometimes artists get a bad rap for this attitude of, ‘It’s all about me. I’m an artist, so you can’t tell me what to do.’ But my big thing is this: God is giving you these gifts, so you need to be using them in some form or fashion to do redemptive, quality content. And again, that doesn’t necessarily mean that it has to be faith-based, right? But it just means that you’re doing stuff that has redemptive value. You could be doing a secular commercial, but the way that you’re conducting yourself with the unbelievers around you can have a tremendous impact.”

After that first year, Green came on as a full-time faculty member. He has since helped build the Cinema & Digital Arts program into a highly practical emphasis that equips students with real-world industry experience. The program not only prepares students to be skilled and Christ-like workers once they graduate, but it also gives them opportunities to work on excellent projects alongside industry professionals during their years at Master’s.

At first, Green began by organizing short-film projects. But from the beginning, his hope had always been to produce feature-length films through the communication department. This past year, he was able to do just that.

“The Man from Nowhere” – fundamentally a story about redemption and forgiveness, as a dying man tries to reconcile with his estranged and bitter son – was filmed over TMU’s most recent winter break. Green and Co. finished postproduction in June, with a scheduled release date in January 2021.

Notably, this is the first feature-length film Master’s has ever produced, and Green couldn’t be more thankful for how the project unfolded.

Prominent industry professionals like Nick Searcy (“Justified,” “The Shape of Water”), Anthony Tyler Quinn (“Boy Meets World,” “No Greater Love”), and Bradley Gregg (“Stand by Me,” “Indiana Jones and the Last Crusade”) jumped in to play roles, and many of the logistical details of organizing a project of this size came together with unusual ease. “Things that came together shouldn’t have come together as quickly as they did,” Green says.

All told, 27 TMU students worked on the production, doing everything from writing articles and producing social media content about the film, to handling the lights on set, and even stepping in front of the camera as actors.

For all of these students, this project and others like it provide experience with the actual process of making a film. On top of that, it gives them a feature-length film to put on their resumes, as well as the opportunity to network with the professionals working alongside them. In fact, a student who worked on “The Man from Nowhere” was contacted by one of the pros he worked with on set and was invited to work on a show.

“Every production we’ve done, that has happened, where students get jobs out of it. And that’s awesome, right?” Green says. “Because now that student can say, ‘I got hired on this show a week after I finished the film.’”

As for what comes next, Green hopes that producing feature-length films will be the program’s new normal. After all, the more opportunities Cinema & Digital Arts students are given to be a part of the filmmaking process, and the more relationships they build with industry professionals, the more opportunities they will have to pursue a career in their desired creative field.

“As a believer, no matter what I do – if I truly believe what I say I believe in, that Jesus is who He is, that’s going to come out in some form or another in my presentation of whatever I do,” Green says. “I won’t be able to help it. That’s the thing I always try to encourage students with: ‘Whatever you do, do it. But know that if you truly are a Christ-follower, you’re not going to be able to help it. And that’s a good thing.’”

For photos, videos, and other updates about “The Man from Nowhere,” check out the film’s [Facebook page](https://www.facebook.com/themanfromnowheremovie/). To learn more about the Cinema & Digital Arts emphasis at Master’s, see the [program page](https://www.masters.edu/programs/cinema-and-digital-arts.html).