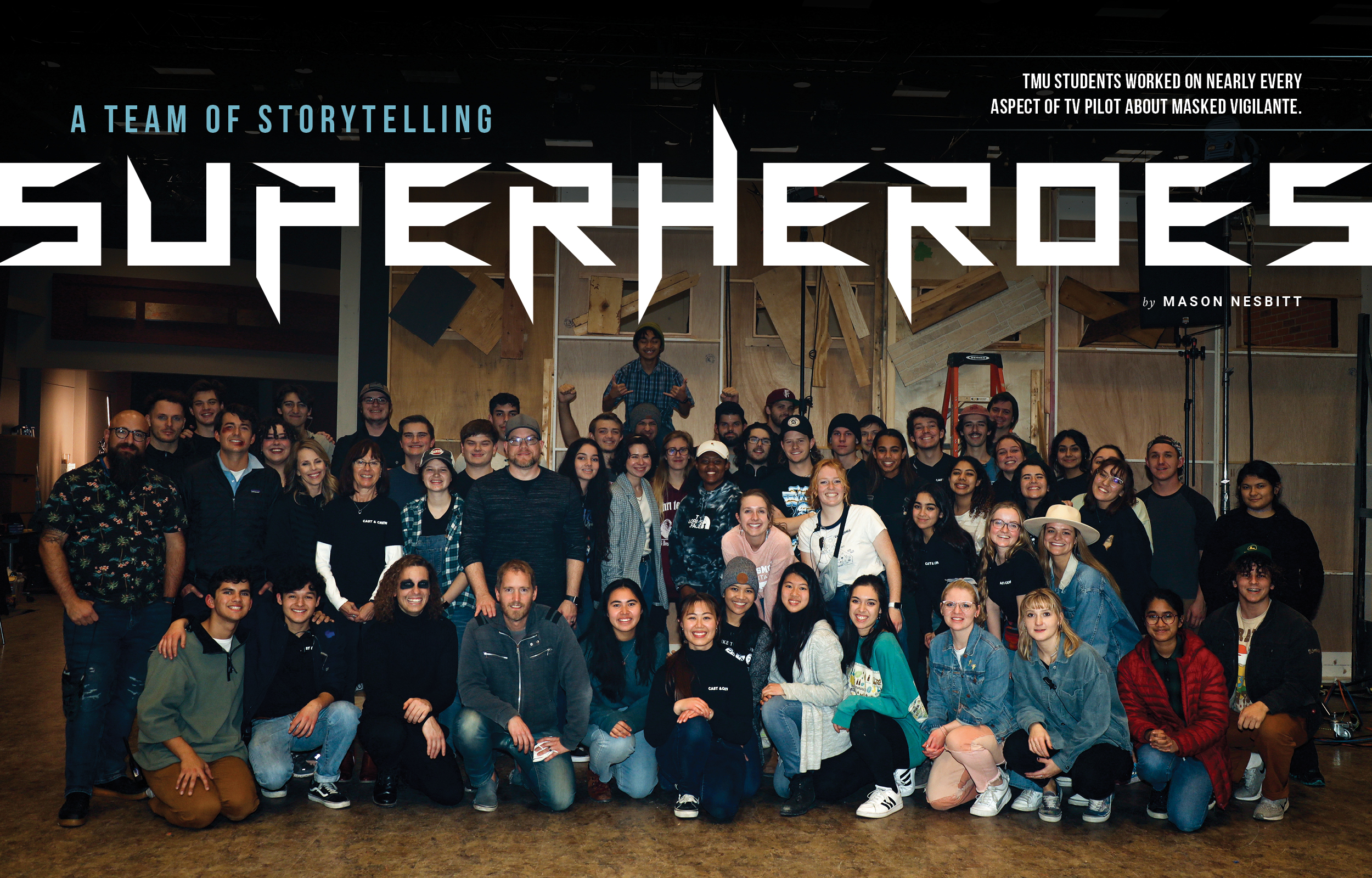 Editor’s Note: This story originally appeared in the March issue of The Mustang Connection magazine.

When The Master’s University filmed a superhero TV pilot earlier this year, students were seemingly everywhere.

Eliza Nesheim decorated the walls of a warehouse with intricate graffiti.

Anika Mellwig served as a producer and first assistant director.

In January, six classes in TMU’s communication department — consisting of 52 students — teamed up to produce “The Shade,” a TV pilot about a vigilante superhero tasked with subduing an ancient, unimaginable evil.

The intense four-day shoot took place on a soundstage in TMU’s Music Recital Hall over Winterim, providing students with hands-on experience in nearly every aspect of filmmaking. They worked with lighting, props, costumes and cameras; a team of students edited together nearly an entire rough cut before week’s end. Journalism students documented the groundbreaking work, and marketing students promoted it.

TMU Cinema & Digital Arts Director Matt Green — who directed and co-wrote “The Shade” — estimates that 90% of the jobs on the show were held by students. Seven industry professionals were also on set, each of them eager to offer pointers and advice.

“Throughout the production, there’s just this constant teaching, constant learning,” says Jefferson Henson, a professional cinematographer and TMU professor who served as the director of photography on “The Shade.”

Junior Cam Specht had worked in various roles on previous TMU productions. But he viewed serving as a producer on this year’s project differently because he was involved from the get-go. He attended budget, creative and production meetings, observing the inner workings of the industry and tackling practical tasks like feeding roughly 65 cast and crew members each day.

“I got to be there from A to Z,” Specht says. “I was really able to see the amount of work that goes into a production.”

Tricia Hulet — TMU’s Theatre Arts director — oversaw students who handled sets, props and costumes for “The Shade.” TMU hired an outside company to build the walls of the soundstage in the Music Recital Hall. But Hulet’s crew dressed the set, creating a graffiti-covered warehouse, an interrogation room and an asylum, with incredible attention to detail. The team went so far as to write a handful of stories that populated a fictional newspaper, The Edge City Gazette, that they printed and used as a prop. For “The Shade,” students decorated three sets inside TMU’s Music Recital Hall: a warehouse, an interrogation room and an asylum. Here’s the warehouse.

“They did things I never even thought of,” Green says. “But when you have an entire class devoted to something, you’re able to really dive in.”

Members of Henson’s class — Narrative Cinematography and Lighting — operated 8K RED EPIC-W and 6K RED KOMODO cameras. Students racked focus, executed camera movement and served as dolly grips. When they weren’t operating cameras, they constructed and shaped the lighting on set. Senior Katie Seitz said she came away with an understanding of the connection between strong lighting and good storytelling.

“You start by lighting the room,” she says, “then you light your subject for the story and progress into specifics like, ‘We want to make sure we see the ring he’s wearing, so we need a special light to capture that, or we need to make sure his eyes are bright and popping.’ You go from the world that you’re lighting to the specific subject and shot that help you tell your story.

“I had never thought of it that way.”

“In-the-moment teaching is something that I think is invaluable, and especially for this industry,” he says. “It’s something that gives the students such an advantage when they leave here.” The footage captured by Henson’s students was transferred to Professor Peter Shickle’s class, Film to Post: Postproduction Workshop. Shickle’s team of eight edited scenes as they came in — on one occasion rushing a rough cut back to the set so Green could see if a complicated action sequence had worked. By the end of the week, the crew had mostly completed a rough cut of the 15-minute production, in large part thanks to computers equipped with Avid video-editing software and a network-attached storage system that allows multiple students to work on different scenes simultaneously.

The program – which aims to train the next generation of artists to recognize God as the ultimate creative force and to reflect this knowledge in what (and how) they create – has now produced an original musical, a western and a full-length feature film, just to name a few projects. The school is also in postproduction on a show that deals with heavy biblical truths in a way that’s digestible for children. The show features a combination of live action and animation. And this should come as no surprise: TMU students are spearheading the animation.