A Letter From One President to Another 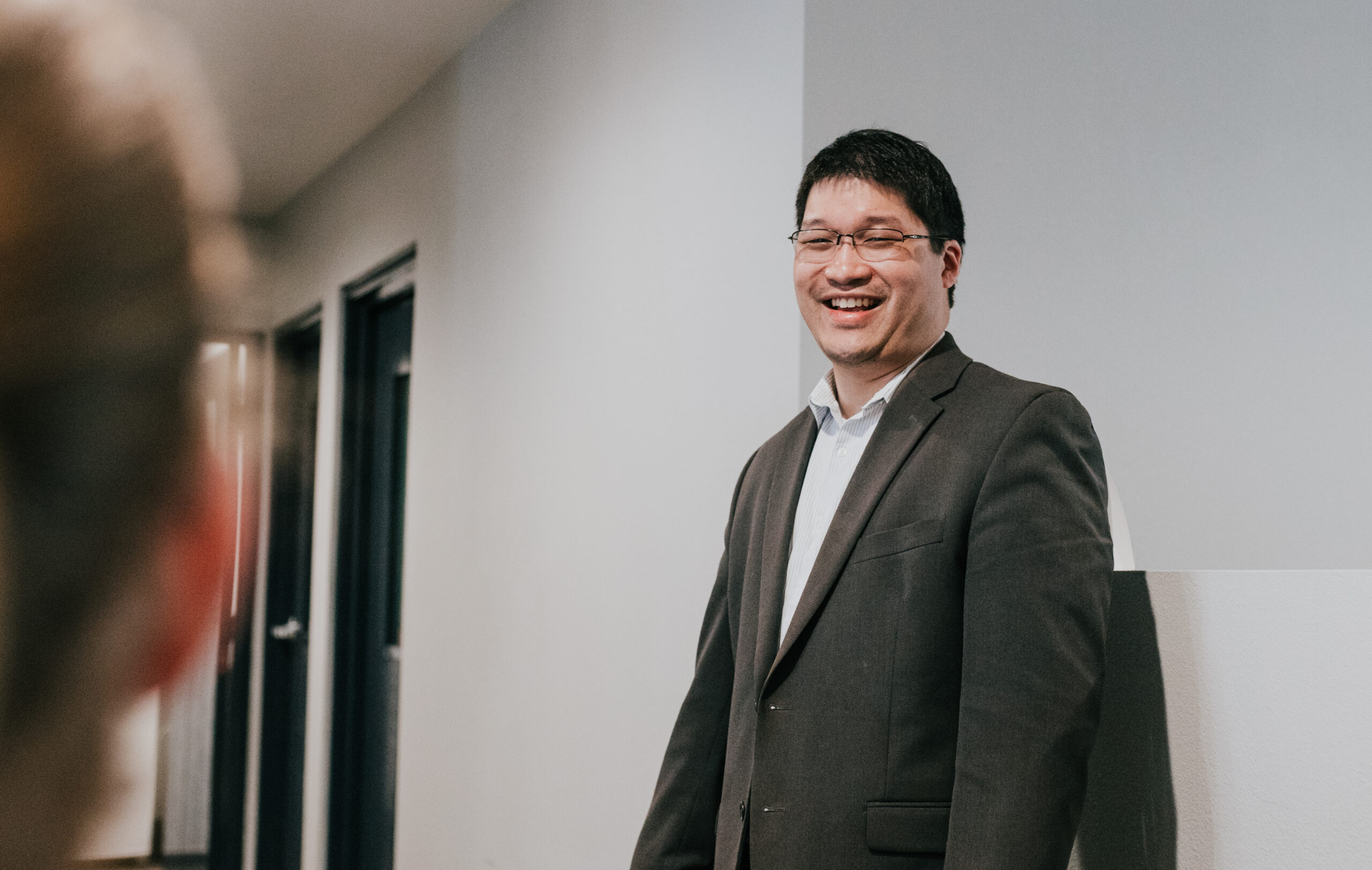 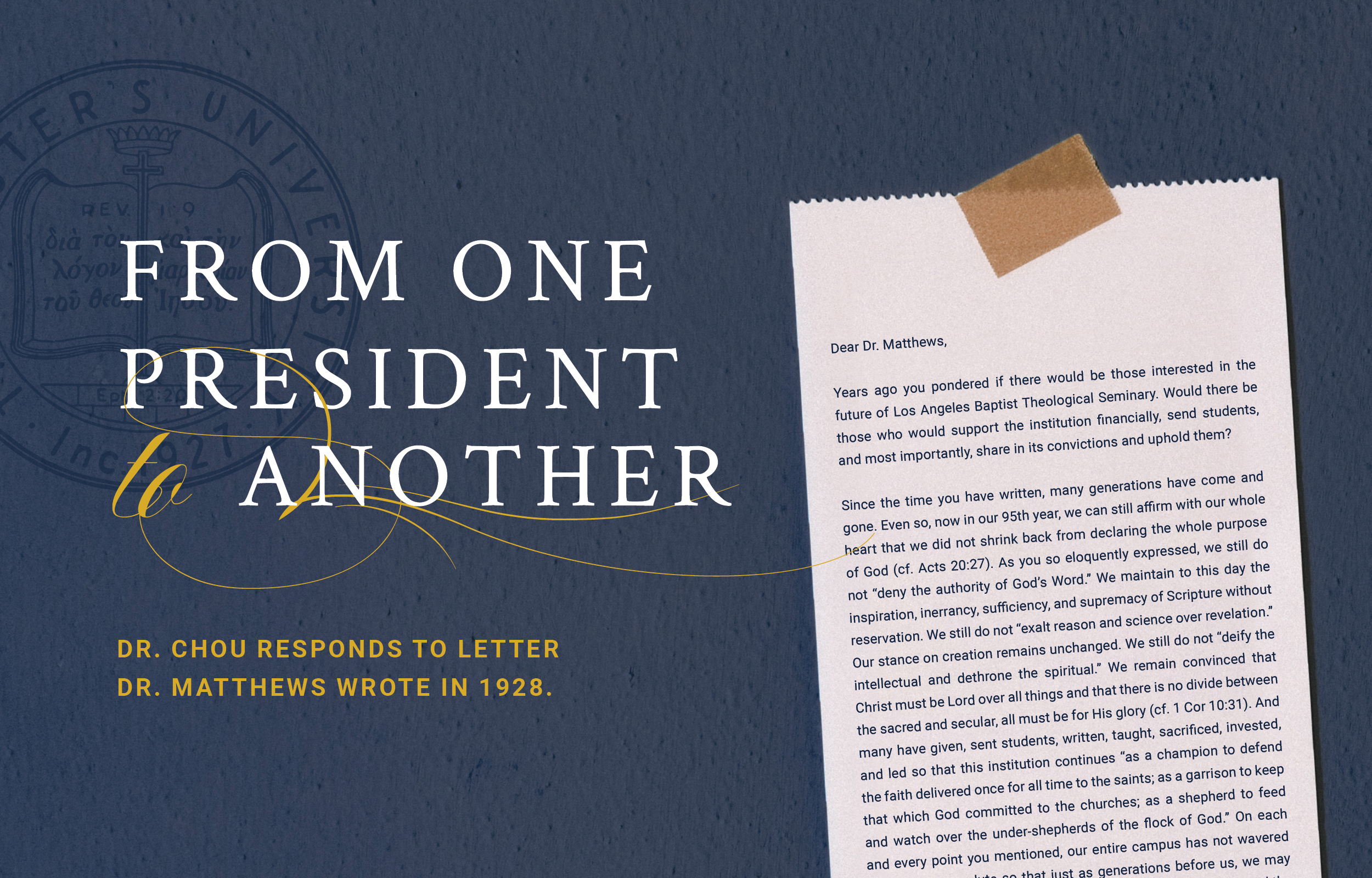 From the Desk of Dr. William A. Matthews

In 1928, our institution’s first president reflected on the school’s inaugural year.

The Seminary has just closed its first year. The reception it has been given is cordial and encouraging. Thirty-six students enrolled, all of them day students. Seventy per cent are graduates of other Institutions. Three students were entitled to Graduation. The high quality of intellectual work done by all the students is very gratifying to the Faculty. The average grade has been 86. Best of all has been the robust spiritual life of the Seminary. Daily prayer meetings, evangelistic fervor, enthusiasm for missions, absolute loyalty to the Scriptures indicate the inspiring atmosphere of the Seminary. The inner man thrives in this air, faith grows strong, prayer becomes a delight and soul-winning a blessed reality.

In a time like this when many Seminaries make light of Evangelization, deny the authority of God’s Word, exalt reason and science above Revelation, deify the intellectual and dethrone the spiritual, making shipwreck of the faith and career of students and Pastors alike, it is inspiring to God’s true children to know that this Seminary is come to the Kingdom for such a time as this. It is here as a champion to defend the faith delivered once for all time to the Saints; as a garrison to keep that which God committed to the Churches; as a shepherd to feed and watch over the under-shepherds of the flock of God. It is here to kindle the flame of Evangelism in the coming ministry that it may spread the fire to our Baptist Pulpits and Churches, burn up the rubbish of Liberalism and Rationalism, and bring back to our ministry the Fire and Power of the Holy Ghost.

Since this Seminary stands forsquare (sic) for the Fundamentals, may we not expect that all true Baptist Fundamentalists everywhere will be interested in its future?

From the Desk of Dr. Abner Chou

In 1928, Dr. William Matthews, the first president of Los Angeles Baptist Theological Seminary (now The Master’s University and Seminary), wrote his reflections upon the first year of the institution’s history. He expresses his joy over what the Lord had done in the life of the school as well as the critical need for sound theological education. But he also asks a question. To use his words, “Since the Seminary stands forsquare [sic] for the Fundamentals, may we not expect that all true Baptist Fundamentalists everywhere will be interested in its future?” In the context of the letter, Matthews, though noting the school had a wonderful first year, wonders if the institution would continue. Would there be people who would stand for theological fidelity in years to come?

Upon contemplating what he wrote all those years ago, here would be my answer from one president to another:

Years ago you pondered if there would be those interested in the future of Los Angeles Baptist Theological Seminary. Would there be those who would support the institution financially, send students, and most importantly, share in its convictions and uphold them?

Since the time you have written, many generations have come and gone. Even so, now in our 95th year, we can still affirm with our whole heart that we did not shrink back from declaring the whole purpose of God (cf. Acts 20:27). As you so eloquently expressed, we still do not “deny the authority of God’s Word.” We maintain to this day the inspiration, inerrancy, sufficiency, and supremacy of Scripture without reservation. We still do not “exalt reason and science over revelation.” Our stance on creation remains unchanged. We still do not “deify the intellectual and dethrone the spiritual.” We remain convinced that Christ must be Lord over all things and that there is no divide between the sacred and secular, all must be for His glory (cf. 1 Cor 10:31). And many have given, sent students, written, taught, sacrificed, invested, and led so that this institution continues “as a champion to defend the faith delivered once for all time to the saints; as a garrison to keep that which God committed to the churches; as a shepherd to feed and watch over the under-shepherds of the flock of God.” On each and every point you mentioned, our entire campus has not wavered but remains resolute so that just as generations before us, we may continue to raise leaders to shepherd the people of God and send the saints to fortify the church as the pillar and grounds of the truth.

It is an honor to walk in the footsteps of faithful men. Your letter is a reminder that our convictions are not a fabrication of our time, but rather reflect the heart of the godly of all time. You sacrificially labored to begin an institution that would carry on the work to entrust the truth “to faithful men who will be able to teach others also” (2 Tim 2:2). Now in the plan and providence of God, it is our turn to carry this out. And by God’s grace, our goal is to use every resource and opportunity to not only be faithful but also to pave the way for all generations after us to be faithful till our Lord returns.

So our first president asked a question, and it falls to all of us – president, faculty, staff, donor, student – to rightly answer it. The past drives and determines our fight for the future. Though time may pass and things may change, the Word of God never changes and so our mission must never change as well. May it be that on the evil day, having done everything, that we stand firm (cf. Eph 6:13).