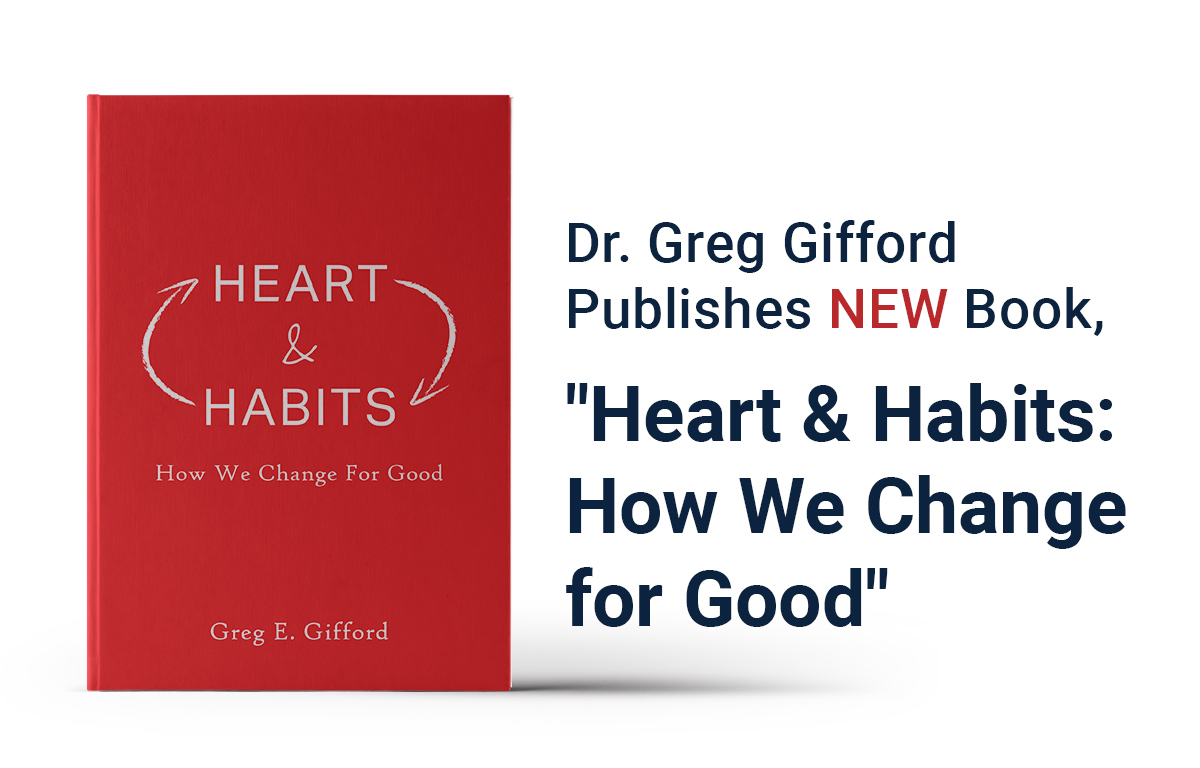 So said Aristotle. From this idea we have gotten the memorable and Instagram-worthy line, “Excellence is not an act, but a habit.”

Aristotle’s point was that happiness and character are not the result of one event, but instead flow from what a person does habitually every day. The Puritans thought and wrote often about this same idea, pondering how habits fit into the sanctification process. But nowadays, it seems like only secular psychologists and productivity gurus write about habits.

That’s why Dr. Greg Gifford, an associate professor of biblical counseling at The Master’s University, set out to write his new book “Heart & Habits: How We Change for Good.” He wanted to give believers a Scripture-based resource to help them learn how to glorify God with their habits.

Gifford says that, at its core, his book is about the “interplay between what we frequently do and our heart.” He hopes to address two errors that Christians make when it comes to habits. On the one hand, some people approach habits by emphasizing the actions and ignoring the underlying motivations. On the other hand, Gifford believes that more people make the mistake of neglecting habits entirely.

“There is this spirit of, ‘Well, I’m not going to obey until I really feel like doing it, because that would be phony,’” he says. “‘I’m not going to wake up and do my devotions this morning because I don’t feel like it. My heart’s not there.’ That new form of legalism, ‘Don’t act until you feel like it,’ involves a serious misunderstanding of the heart.”

The antidote to this new legalism is learning how God uses our habits to change our hearts. Gifford begins the book by borrowing a Puritan metaphor that compares the sanctification process to a campfire. God gives the initial spark of change, but it is the believer’s responsibility to stoke the flame through spiritual effort.

“Once we have that symbiosis — once we have that flame burning well — it’s much easier to maintain the campfire. And that’s the way it works for habit development. Once you’ve developed good, godly, beneficial habits, change will start becoming easier over time. So much so that you can begin doing what honors God in a habitual way without thinking a lot about it.”

Gifford gives the example of a car accident. If a believer has practiced thinking about and approaching situations in light of God’s sovereign and loving purposes in everyday life, it’s more likely that their knee-jerk reaction to an accident will be trust, not panic.

The key to developing this sort of instinctual faithfulness is by beginning to act faithfully even when we don’t feel like it. This is because, as Gifford explains, “God uses what we do to shape what we want to do — to steer and direct it.”

In his ministry as a biblical counselor, Gifford has often observed this heart/habit dynamic and guided people through it. “If a person says, ‘I don’t really have the warm fuzzies for my spouse,’ I’m like, ‘That may be true right now. But how do you get the warm fuzzies for your spouse? It’s through Spirit-filled obedience. It’s through the practices you do every day as you habitually do what God has called you to do. That’s how the warm fuzzies come about.’”

In Gifford’s own life, church attendance was something that began as a habit and moved to the heart.

“There was a time when going to church was a hard habit to practice. But now it’s not. And that’s true for a lot of people; we just know that Sunday morning is church time, and we don’t have to wrestle with that. And that habit of going to church has shaped our hearts so much that now we want to go, and it’s just part of what we do.”

Every believer, regardless of maturity level, is in the middle of this process. We are all putting off bad habits, putting on godly ones, and experiencing the resulting heart change. No one has arrived, but every one of us can look back on our lives so far and see progress. Gifford hopes that his book will become a valuable tool for people in this journey — a biblically faithful alternative to secular resources.

Rachel Miller, a graduate of TMU’s biblical counseling program and one of the book’s proofreaders, says, “There are a ton of books on habits out there, but they’re very self-help, pull-yourself-up-by-your-bootstraps books. Dr. Gifford’s book comes from a biblical perspective. It talks about how change actually happens and the balance between personal responsibility and the work of the Spirit.”

Gifford plans to continue developing new resources, including a series of videos on the book’s website and a companion workbook for those wanting to get serious about habit development. In the meantime, this book will help readers overcome common misconceptions about obedience and encourage them to be faithful even when it feels difficult.

“One of the most admirable steps of obedience is doing something even when you don’t feel like it,” Gifford says. “If you let your emotions — your state of being in the moment — prevent you from being obedient, you are never going to see heart change. But if you say, ‘God, I don’t want to do this, but I trust you, and I’m going to do what you’re calling me to do according to your Word’ — boom. That’s money.”

You can purchase Gifford’s book on Amazon and at heartandhabits.com.

To learn more about being equipping at TMU to serve Christ as a biblical counselor, click here.