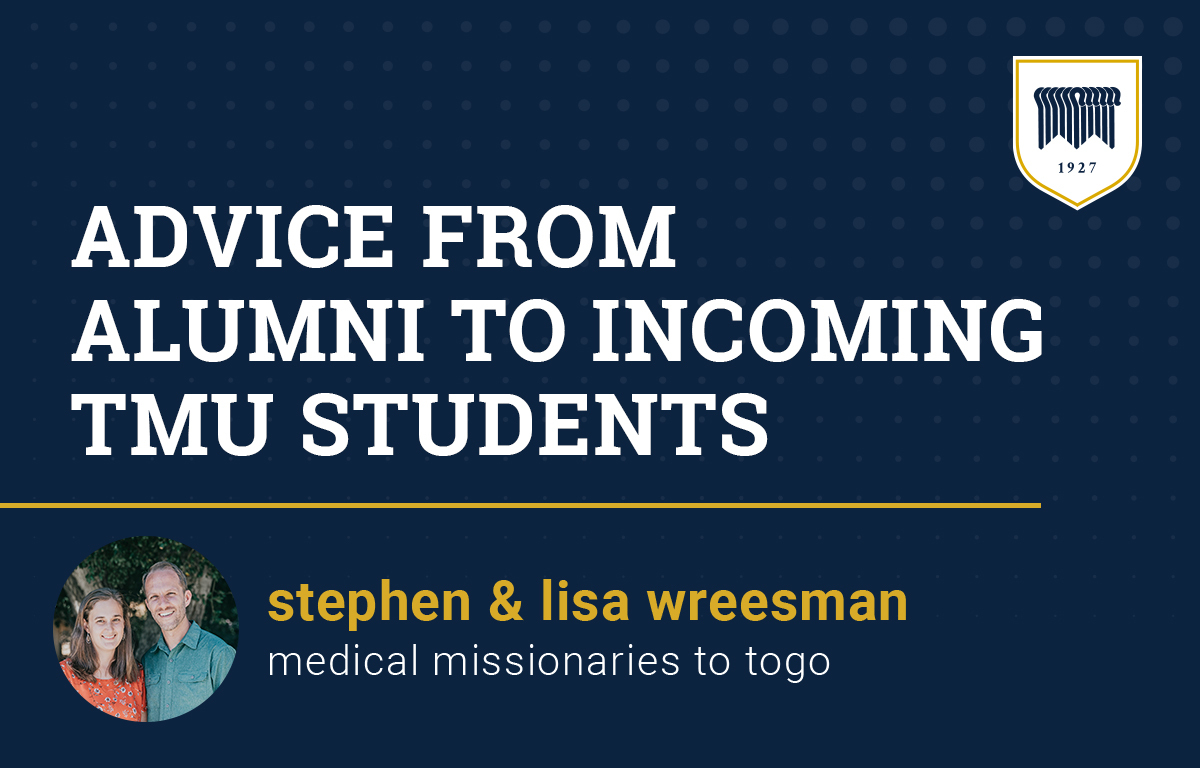 Every time a new freshman class arrives at The Master’s University, they start some variation of a journey that Stephen and Lisa Wreesman have already traveled.

Stephen and Lisa came to TMU in the early 2000s and were equipped both for careers in the medical field and for lives of commitment to Christ and Scripture. Eventually, they got married and earned medical degrees (Stephen at Johns Hopkins University School of Medicine, and Lisa in an accelerated master’s program in nursing at the University of Maryland), before going out into the world to serve Christ.

Together they’ve worked as medical missionaries in Togo for the past three years. And on a recent visit to the United States, they stopped by TMU. So, we asked them what advice they’d give to incoming students. Here’s what they had to say.

Q: What advice would you give to incoming TMU students as far as how they can make the most of their time at Master’s?

Stephen: One thing I would tell people is that you’re not just coming to school to learn a profession or to study a major. You’re coming here to learn what it means to live life for Christ. So, take advantage of all that’s part of that, the relationships, the people who are pouring into you, and the people you get to serve. There’s just a richness here being part of it, because it goes beyond what you learn in the classroom. It’s about answering the question, “What does it mean to serve Christ in all areas of life?”

Q: What would you say specifically to those students who come in on the pre-med track?

Lisa: Just pursue what you have in front of you with excellence. Work hard, and if something is difficult, don’t let up because that’s easier. Everything you work at, whether it’s a really hard class or some of the other opportunities you might have here, pursue it with excellence because that’s what honors the Lord.

Q: How should incoming students aim to balance working hard on their classwork while also enjoying everything Master’s has to offer relationally?

Stephen: Working hard at your academics is key to learning science well, especially if you’re going to take that and apply that well. But when you’re going out into the world, there’s also going to be friendships and opportunities to serve people. It’s those relationships, people pouring into you and you getting to serve them, that helps sustain you in the midst of all that difficulty and those challenges. Both sides are important, and they’re both a blessing from God, and I encourage students to find time to work hard and find time to pour into relationships. And sometimes that just means making sure you’re not wasting time along the way.

Q: If you could travel back in time, what would you tell the freshman version of yourself?

Lisa: In some ways, I needed to learn not to be anxious or to worry too much about this grade or that grade. I needed to step back and see how God was preparing me on a lot of different levels, both academically and relationally. I think sometimes, especially as a freshman, I needed to zoom out and look at all of those different areas rather than just being really worried about one or the other.