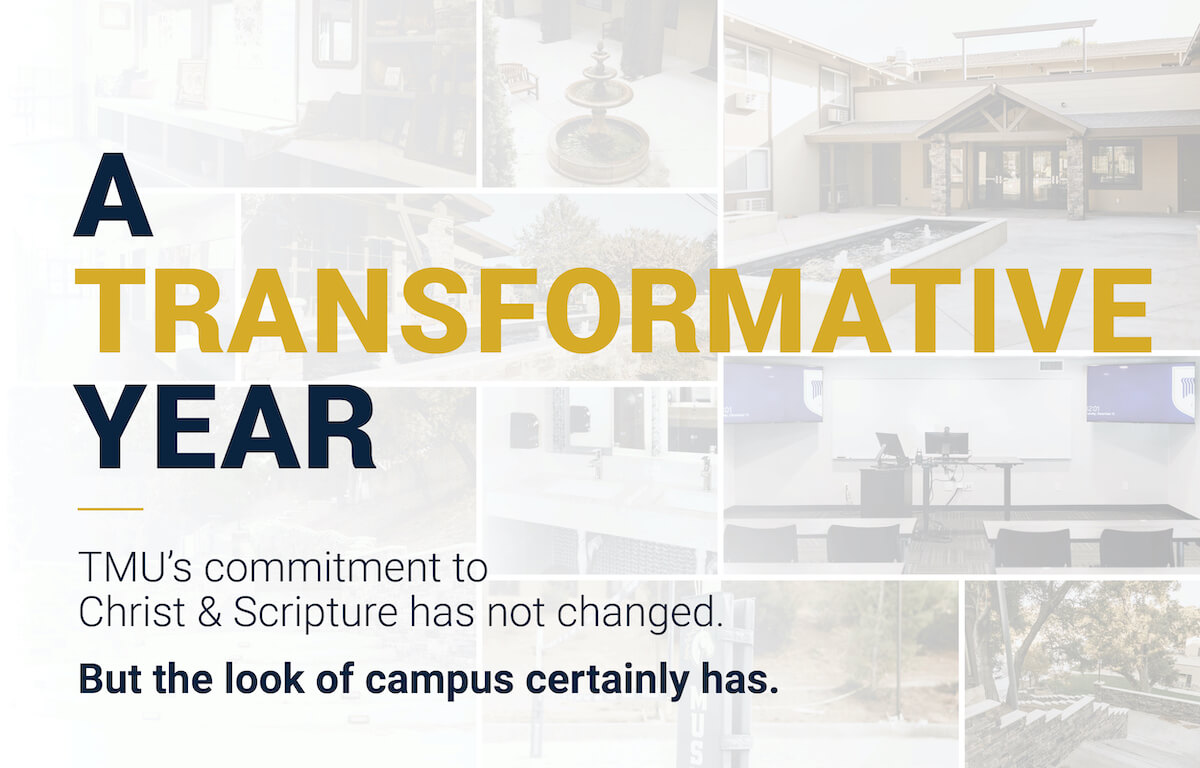 It’s a comment Todd Kostjuk hears often these days when alumni of The Master’s University return to visit.

“They say, ‘I cannot believe it looks like this,’” says Kostjuk, TMU’s chief financial officer.

The transformation of TMU’s campus has been dramatic over the last decade and has only accelerated in 2020. Since the beginning of the year, The Master’s University has invested more than $10 million into 38 building projects, with some of the more visible upgrades including the construction of a sand volleyball complex and the renovation of numerous classrooms.

Extensive work also took place in Hotchkiss, Dixon and Sweazy dorms and in the Engineering and Computer Science Center.

Remodeling inside the Business Center was another centerpiece of improvements made possible by generous donors and TMU’s ability to refinance its bond at favorable market interest rates. The funds were restricted to capital projects.

“Master’s is a special place because of our faculty, staff and students and the commitment to Christ and Scripture that binds us all together,” says Dr. Mitch Hopewell, TMU’s provost. “But over the years, we haven’t had the kind of capital resources to bring our buildings into line with that excellence.”

After incremental updates throughout the decade — highlighted by remodels of Rutherford Hall (2011), Dunkin Student Center (2013) and the MacArthur Center (2014), and construction of the School of Education (2019) — Master’s was able to cover more ground at once this year.

Enhancing the student experience was at the forefront of a staggering slate of projects. On the residence hill, where most living spaces have received significant investment in recent years, TMU completed major work on a trio of dorms in 2020.

Sweazy and Dixon each received upgraded bathrooms, lobbies, hallways, bedrooms, windows and doors. Hotchkiss underwent similar interior renovations, and the facade of all three buildings was updated to match the school’s craftsman style.

“In all our dorms, we want students to get excited when they walk through the front doors,” Kostjuk says.

![](/uploads/Sand%20Volleyball%20Aerial.jpg)
TMU completed a state-of-the-art beach volleyball complex near the dorms in 2020.

One of the year’s most dramatic changes took place not far from the dorms. TMU removed two tennis courts to clear room for a state-of-the-art beach volleyball complex. With three sand courts, the facility can host intercollegiate matches while also creating recreational space for the student body.

Upon opening, the well-lighted complex instantly became one of the school’s most popular nighttime hangouts.

“We can play during daylight hours, but in the heat of August and September you can also wait until the sun goes down,” says TMU Associate Athletic Director Steve Waldeck. “And having it close to the dorms is tremendous.”

Another considerable undertaking came in establishing a home for the Department of Engineering and Computer Science. The task required a complete remodel of one of the single-story buildings that line the entrance to campus along Placerita Canyon Road. The structure now features two classrooms and the school’s first engineering lab.

On the other side of campus, TMU also remodeled the Business Center, creatively reorganizing the space so that it now houses three high-tech classrooms and three collaborative spaces.

Dr. John Beck, dean of the School of Business and Communication, says he recently walked past one of the conference rooms and saw a student talking to representatives from a prominent company. The student was pitching his guests on new branding for a sports drink.

“He had monitors set up, and they were so impressed with the work he did that he might be doing an internship for them. It’s hard to put a price on that,” Beck says. “But that’s what we have because of excellent financial management from our CFO and the generous hearts of our donors.”

![](/uploads/New%20Hotchkiss%20take%202%20(1).jpg)
Hotchkiss Hall received a facelift and an updated courtyard this year.

In all, the University fully remodeled 12 classrooms — replacing lights, carpet and paint, and in some cases covering cinder block with drywall. Technology and furniture were also upgraded.

Before commencing the project — which included classrooms in the Biblical Studies, Business, English and History, and Music centers — TMU officials solicited input from professors. The dialogue led to the replacement of projectors with TV monitors and the addition of ceiling-mounted speakers for consistent audio distribution across some of the larger class spaces.

![](/uploads/Stairs%20going%20up.jpg)
Another major project in 2020: TMU revamped the staircase leading to the dorms.

During the summer, Hendrickson was also part of a team tasked with equipping every classroom with live-stream capabilities to meet the needs of an unusual fall semester, a vast undertaking on a two-month timeline.

The effort was another example of the kind of teamwork displayed by numerous offices across TMU this year. Together — and with the help of outside contractors, architects and vendors — was the only way the school could tackle a to-do list that included the installation of an impressive stone staircase leading to the dorms, and the remodeling of the Online Center and executive offices inside Rutherford Hall. Not to mention a sophisticated lighting project that involved hanging lanterns from trees and installing numerous lampposts — a move that instantly boosted the campus’ ambience after dark.

“It took an amazing group of people to get all this done,” Kostjuk says.

Work has begun on new outdoor student spaces near Dixon and Slight dorms. The Hotchkiss Pool is being remodeled, and a significant library renovation project is underway. A revamp of the Under the Oaks student space is scheduled to begin shortly.

“We’re really, really grateful for our donors who throughout the years have invested millions of dollars in upgrading our campus,” Kostjuk says.

![](/uploads/0T6A9805%20(1).jpg)
TMU completed extensive renovations inside Dixon and Sweazy dorms this year, including a refurbishing of the lounge areas.