What is a Spiritual Privilege? 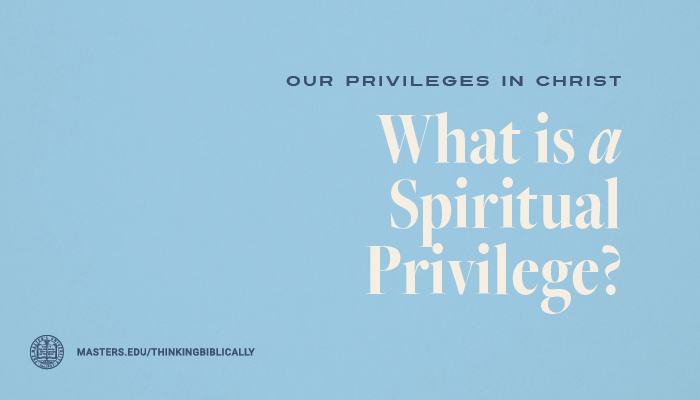 And coming to Him as to a living stone which has been rejected by men, but is choice and precious in the sight of God, you also, as living stones, are being built up as a spiritual house for a holy priesthood, to offer up spiritual sacrifices acceptable to God through Jesus Christ. For this is contained in Scripture:

“Behold, I lay in Zion a choice stone, a precious corner stone,
And he who believes upon Him will not be put to shame.”

This precious value, then, is for you who believe; but for those who disbelieve,

“The stone which the builders rejected,
This became the very corner stone,”

and, “A stone of stumbling and a rock of offense.”

They stumble because they are disobedient to the word, and to this stumbling they were also appointed. But you are a chosen family, a royal priesthood, a holy nation, a people for God’s own possession, so that you may proclaim the excellencies of Him who has called you out of darkness into His marvelous light; for you once were not a people, but now you are the people of God; you had not received mercy, but now you have received mercy. (1 Peter 2:4-10)

This is a rich section of Scripture that deals with the topic of spiritual privileges.

So very often when we study the Bible, we’re talking about spiritual duties, aren’t we? Very often we’re being exhorted. We’re being commanded. But in my judgment, there aren’t really any imperatives in this passage. This is all a list of our privileges — what is ours because we are Christ’s.

Let’s begin at the beginning, with what initiates all of our spiritual privileges: “And coming to Him.”

My, what a great truth that is! We often say as Christians, “I came to Christ,” and that is exactly the expression that Peter has in mind. This begins at the time of salvation when you come to Christ in faith:

Jesus said to them, “I am the bread of life. He who comes to Me will never hunger, and he who believes in Me will never thirst.” (John 6:35)

Initially, you come to Christ in salvation. But that is not the total meaning that is conveyed in the verb. The verb here, with its pronoun, means to come with the idea of staying. The idea here is of coming to Him to remain in intimate personal communion, fellowship and abiding. In fact, this word, proserchomai, is used of drawing near to God for continuing worship. It’s used that way in Greek translations of the Old Testament. One form of this verb is the noun “proselyte,” which means a person who was far off who drew near. It is the normal word used in the book of Hebrews for coming near to God to remain there and worship Him.

Spiritual privilege begins when you come to the Lord Jesus Christ and is sustained as you remain there.

We could say it this way: “Coming to Him” is a phrase in which Peter implies the whole movement of the inner life toward communion with Jesus Christ. That’s where spiritual privilege begins. That’s what gives us an advantage over the rest of the world. Because of Christ, we are the privileged, favored and blessed.