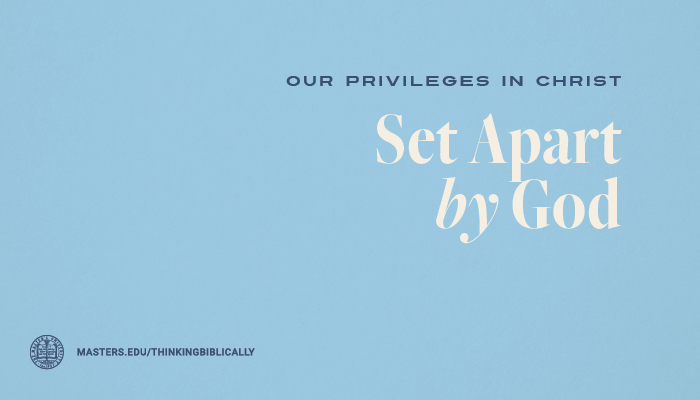 But you are a chosen family, a royal priesthood, a holy nation, a people for God’s own possession, so that you may proclaim the excellencies of Him who has called you out of darkness into His marvelous light. (1 Peter 2:9)

We are not only a chosen race and a royal priesthood, but we are a holy nation.

The word “nation” is ethnos, from which we get “ethnic.” It simply means a people. We are a holy people. And “holy” means separated or set apart.

Remember that all through this passage, Peter is drawing on the Old Testament. And when he says that we are a holy nation, he no doubt has Exodus 19:6 in mind: “And you shall be to Me a kingdom of priests and a holy nation.”

The people of God, Israel, were referred to as a holy nation. How tragic it was that Israel, as a holy nation, forfeited the great privileges of belonging to God because of unbelief! But what was a tragedy for Israel has become a blessing for us. God now has a new people until Israel finally turns in faith to the Messiah.

Until the salvation of Israel, we are the holy nation of God.

Perhaps the word that theology has used most to describe this is “sanctification.” We are a sanctified people. We have been separated from what is unholy and we have been devoted to God.

Sanctification is more than just a state. It becomes a progressive life pattern.

Sanctification doesn’t mean you never sin again; it just means you were set apart from being in bondage to sin and the devil and death. Now, having been set apart unto God, you begin to live for God. And you continue to be more and more separated from the sin that was so much the dominant pattern of your life.

At my salvation, I was taken out of the kingdom of darkness and placed in the kingdom of God’s dear Son. I was taken out of death and put into life. I am God’s possession. That is my positional sanctification. But there’s a progressive reality that I must continually live more and more in a holy way, so that I bring out in my life the reality of my position. It’s about becoming what you are.

So, we have a wonderful privilege. We are now a holy people. We no longer are owned by Satan. We no longer are in bondage to sin. We have entered into a new relationship. And progressively and practically, we work toward living in the light of that holy identity.

Now, what does this separation mean in practical terms? First of all, it does not mean the separation of a monk. We’re not talking about needing to isolate yourself from the world. That’s outer behavior that doesn’t do anything for the heart.

Nor is it the separation of the Stoic, who believes it is a mortal sin to be happy and walks around with a dour look on his face and a severe kind of seriousness.

So what are we called to? Practical sanctification is simply this: cultivating an effective, personal intimacy with Christ. The heart of sanctification is that I cultivate an intimate relationship with Jesus Christ. You will never be a holy person in the fullest sense until you have cultivated this sort of relationship. You must pursue such intimacy with the living Christ that it controls your conduct.

This post is based on a sermon Dr. MacArthur preached in 1989, titled “The Believer’s Privileges, Part 6: Separation, Possession, Illumination… .” In addition to serving as the pastor of Grace Community Church and the voice of Grace to You, Dr. MacArthur is the chancellor of The Master’s University in Santa Clarita, Calif. You can learn more about TMU at masters.edu.