Jesus’s Work in the Church 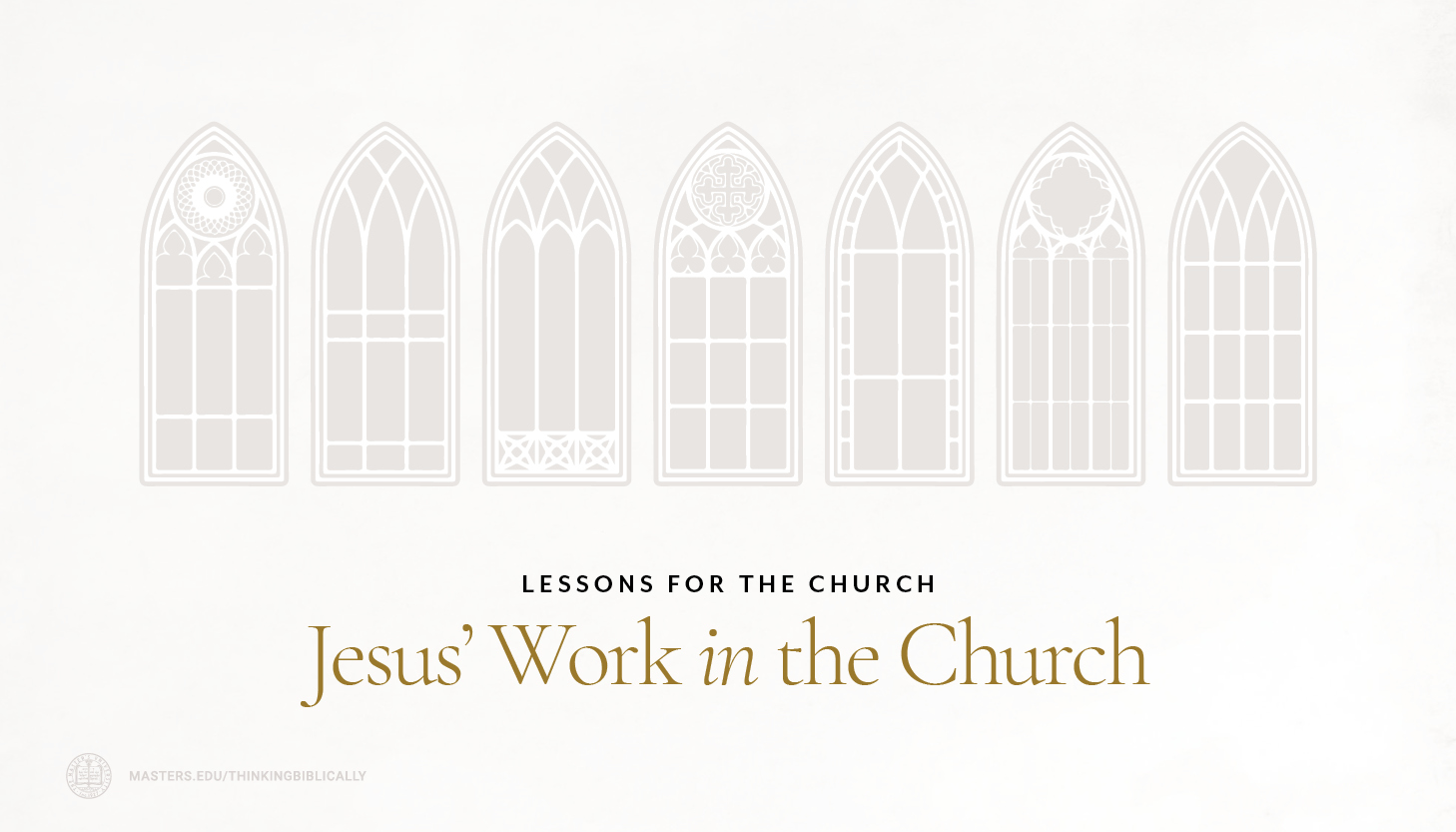 Then I turned to see the voice that was speaking with me. And having turned I saw seven golden lampstands; and in the middle of the lampstands I saw one like a son of man, clothed in a robe reaching to the feet, and girded across His chest with a golden sash. And His head and His hair were white like white wool, like snow; and His eyes were like a flame of fire.

His feet were like burnished bronze, when it has been made to glow in a furnace, and His voice was like the sound of many waters, and having in His right hand seven stars, and a sharp two-edged sword which comes out of His mouth, and His face was like the sun shining in its power.

So, what does John see? He sees the glorified Son of God, and he sees Him in the middle of seven golden lampstands.

Verse 20 says the seven golden lampstands represent the seven churches. This is to remind us that the church is the light in the world. God’s people are assembled in local churches as lights in the world, each in its own place.

They’re also golden. What does that mean? It means that they’re costly, precious, lovely, magnificent, beautiful, valuable. They are, in fact, the most valuable reality in any place.

Why are there seven? Well, there were seven churches that had been planted in Asia Minor. But seven is a number often used to refer to completeness. So they’re symbolic, then, of the whole people of God.

This is the Son of Man, but He’s not like the Christ that John saw before the ascension. He is now in full glory. John sees the glorified Christ, the Lord of the church, moving in His church.

In itself, this is tremendously encouraging. This is very comforting.

Jesus had said to them on that Thursday night in the upper room, “I will not leave you as orphans.” He will not forsake His church. And here, John looks and sees that He has not.

The circumstances look so bad. Here is this last apostle exiled in his 90s to do hard labor. And the churches seem to be crumbling under the weight of the wretched culture that surrounds them. John needs to know that Christ is moving in His church — and that’s what he sees in this comforting vision.

Now, what is the Lord doing in His church? The imagery here is unmistakable. He’s the royal high priest interceding on behalf of His church. He’s in His priestly work.

Hebrews unfolds this: We don’t have a high priest who cannot be touched with the feelings of our infirmities, but was in all points tempted like as we are, yet without sin. We have a high priest to whom we can go boldly for help in time of need, because we know He’s been there. We have a faithful high priest. We have one who ever lives to intercede for us. This is His priestly work.

Jesus has an unequaled capacity for sympathizing with our distress, with the danger in which we live, with the sorrow that encompasses us, and with the trials of life. He understands us. He knows the path of victory over sin. He walked that path, and in so doing released us from our sins by His blood. He knows suffering far beyond what we know.

He endured temptation triumphantly. He endured the cross victoriously. He is the sympathizer. He’s present in His church, interceding for His church before God — pleading, praying on our behalf, interceding, that we might not ever be tempted beyond what we are able. That is why trials don’t crush our faith, but instead are cause for triumph, strength, growth, and joy.

John, of course, is overwhelmed by this vision. He falls over like a dead man, overwhelmed by the majestic glory of what he sees. He is shocked into lifelessness. This is an experience that almost kills him. But he really has nothing to fear, because the Lord places His right hand on him and says, “Do not fear.”

Why was he afraid? Because he’d just seen the Holy Lord in His church. And John, even as a 90-year-old apostle, knew his own sinful heart.

There’s always fear in a true vision of Christ, because we see His glory and we’re aware that He sees our sin. But He places His right hand on John and says, “Do not fear; I am the first and the last, and the living One; and I was dead, and behold, I am alive forever and ever, and I have the keys of death and of Hades.”

What He’s saying to John is simply this: “Don’t worry about dying. Don’t worry that I might kill you. I’ve already died and risen again for you. Don’t be afraid.”

The same one who struck fear in his heart touched him. And I want this passage to touch you with that tender encouragement. Even you, as a sinner, have nothing to fear. The glorious Lord will not be to you an executioner. He will not bring you to death; He has already died and risen again for you.

So here we are seeing this vision of Christ. We don’t have anything to fear because He has died and risen again for us. And we’re part of the plan. We’re not going to write a new book of the Bible. But we have all been called to proclaim His glory to the ends of the Earth. Pick yourself up, dust yourself off, and do what He called you to do.

That is what John does, and in Revelation 2 and 3, we have seven letters written to seven churches. These are actual churches in actual towns. Our Lord speaks to each of these churches, confronting the incipient danger that is creeping in from the pagan culture in which they sit. And these letters are so instructive for us. From them, we learn the dangers that we face in a hostile world.

This post is based on a sermon Dr. MacArthur preached in 2015, titled “The Lord’s Work in His Church” In addition to serving as the pastor of Grace Community Church and the voice of Grace to You, Dr. MacArthur is the chancellor of The Master’s University in Santa Clarita, Calif. You can learn more about TMU at masters.edu.