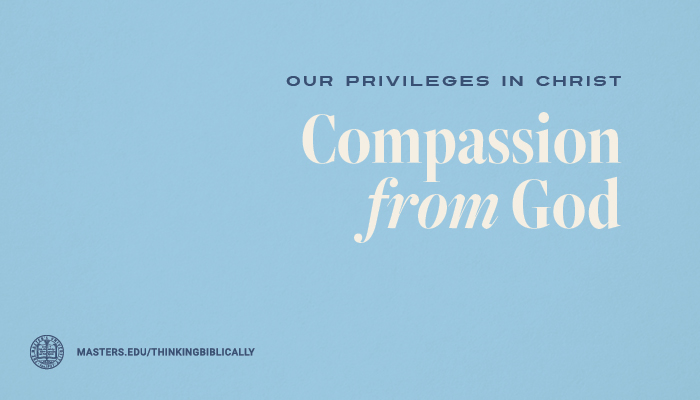 This verse brings us to another privilege: compassion from our Lord. We see this other places in Scripture:

And I will sow her for Myself in the land.
I will also have compassion on her who had not obtained compassion,
And I will say to those who were not My people,
‘You are My people!’
And they will say, ‘You are my God!’” (Hosea 2:23)

Those in the church, who were once not a people, are now the people of God. And what is the means of this change? The means is mercy. A “no people,” the Gentiles, became God’s people through mercy.

Just what is mercy? It’s basically pity or compassion. The Old Testament could substitute the word “loving-kindness” from that familiar Hebrew word, hesed. It is God’s withholding from us the just punishment of our sin.

There are two kinds of mercy. We could call one general mercy. It’s seen in God’s providence to the widest range of human beings. It shows us His patient pity, His forbearing compassion to sinners.

God has every right to destroy sinners immediately. But listen to what it says in Lamentations 3:22:

The lovingkindnesses of Yahweh indeed never cease,
For His compassions never fail.

The verse is not really identifying any particular group of people. He is just compassionate. It says the same in Psalm 145:9:

Yahweh is good to all,
And His compassions are over all His works.

Now listen very carefully: This mercy is equally undeserved, for we are sinners like the rest. For some people, God is generally merciful in this life by alleviating the present full potential disaster of sin. For other people, He alleviates forever the potential disaster of sin. Those are the elect, who receive not only the general mercy in this life but the special mercy in the life to come.

Why? Because He wanted to.

Why did He want to? Because He’s a God of love.

Why us? I don’t know. He has mercy on whom He will have mercy.

Now, it is not the wretchedness of the sinner that causes God to show mercy. God is not sitting in heaven saying, “Oh, I feel so sorry for all the sinners. And I’m so emotionally distraught about their sin that I’m going to be merciful to them.” God does not show mercy out of a certain feeling for the wretchedness of man, because if that were true, God would have to be merciful to all of them. That’s not the compelling issue.

Secondly, it is not because some of us sinners are more worthy of mercy than others of us. None of us are worthy of it, right? If we were, it wouldn’t be mercy, because mercy is holding back the just punishment which we deserve.

It is not the wretchedness of the sinner that compels God to show mercy. It is not that some sinners are more worthy of mercy than others. It is not simply that because of the work of Christ God can be merciful. None of those make sense.

We have been chosen by His uninfluenced sovereign love before the world began. This ought to escalate your sense of being a privileged person. We are blessed! We can say this with the psalmist:

For Your lovingkindness is great to the heavens
And Your truth to the skies. (Psalm 57:10)

This post is based on a sermon Dr. MacArthur preached in 1989, titled “The Believer’s Privileges, Part 6: Separation, Possession, Illumination… .” In addition to serving as the pastor of Grace Community Church and the voice of Grace to You, Dr. MacArthur is the chancellor of The Master’s University in Santa Clarita, Calif. You can learn more about TMU at masters.edu.