A Hope That Will Never Disappoint 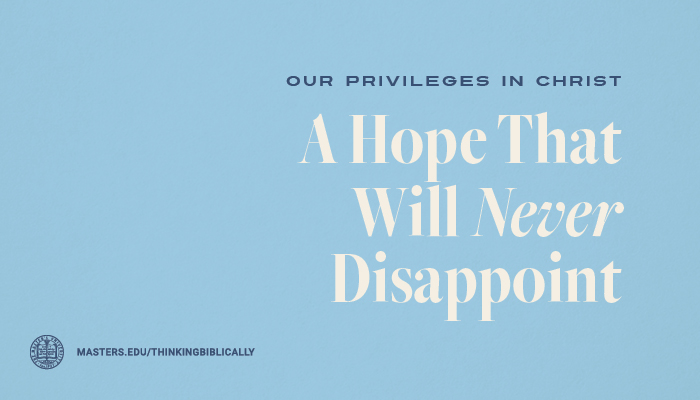 For this is contained in Scripture:

“Behold, I lay in Zion a choice stone, a precious corner stone,
And he who believes upon Him will not be put to shame.” (1 Peter 2:6) (LSB)

The key idea here is not being ashamed — not finding out that the one in whom we put our hope failed us.

But notice how Peter gets into this point in a wonderful way. Following this wonderful list of spiritual privileges, he introduces a series of Old Testament texts. And he introduces them with that phrase, “This is contained in Scripture.”

It is significant that he doesn’t say, “It is written,” because they are not direct quotes. He is not specifically quoting Scripture, he is merely referring to its truth. And the first one to which he refers is Isaiah 28:16.

This was a very familiar and a very important Old Testament text. It spoke of the Messiah, and it promised that when the Christ came He would be the cornerstone to fashion the new temple of God.

Notice that he says, “This stone that is laid in Zion is a choice stone.” Choice means elect. Christ is elect, the chosen one of God.

The cornerstone was the most important stone in any building. The Greek word akrogōniaios literally means, “at the extreme angle.” And what that intends to say is that the cornerstone set all the angles. You lay down one stone at a corner, and that sets all of the proper angles. All the angles of the building are kept in symmetry by that one cornerstone, against which all stones are laid.

In the building of the household of God, the cornerstone had to be perfect. And the perfect, elect, prepared cornerstone is none other than Jesus Christ. And one of our great privileges as Christians is that we will never be put to shame in Christ. Never.

Do not be afraid, for you will not be put to shame;
And do not feel dishonored, for you will not be humiliated;
But you will forget the shame of your virginity,
And the reproach of your widowhood you will remember no more.
For your husband is your Maker,
Whose name is Yahweh of hosts;
And your Redeemer is the Holy One of Israel,
Who is called the God of all the earth. (Isaiah 54:4-5)

You will never be disappointed in the Lord. Paul gives us the very same thought in that wonderful eighth chapter of Romans:

What then shall we say to these things? If God is for us, who is against us? He who indeed did not spare His own Son, but delivered Him over for us all, how will He not also with Him graciously give us all things?

Who will bring a charge against God’s elect? God is the one who justifies; who is the one who condemns? Christ Jesus is He who died, yes, rather who was raised, who is at the right hand of God, who also intercedes for us.

Who will separate us from the love of Christ? Will affliction, or turmoil, or persecution, or famine, or nakedness, or peril, or sword? Just as it is written,

“For Your sake we are being put to death all day long;
We were counted as sheep for the slaughter.”

But in all these things we overwhelmingly conquer through Him who loved us. For I am convinced that neither death, nor life, nor angels, nor rulers, nor things present, nor things to come, nor powers, nor height, nor depth, nor any other created thing, will be able to separate us from the love of God, which is in Christ Jesus our Lord. (Romans 8:28-39)

This post is based on a sermon Dr. MacArthur preached in 1989, titled “The Believer’s Privileges, Part 4: Security and Affection.” In addition to serving as the pastor of Grace Community Church and the voice of Grace to You, Dr. MacArthur is the chancellor of The Master’s University in Santa Clarita, Calif. You can learn more about TMU at masters.edu.