A Heart of Affection for Christ 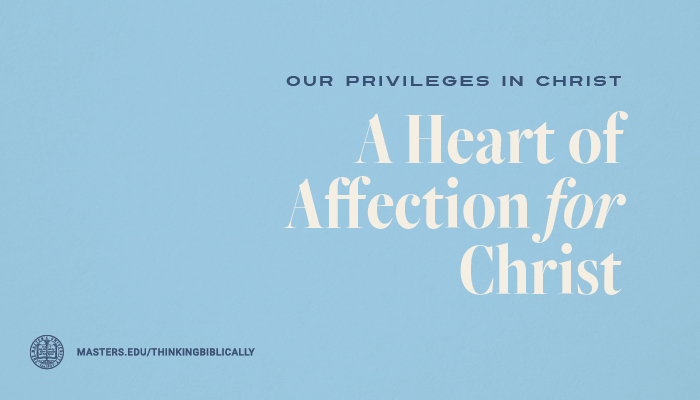 This precious value, then, is for you who believe; but for those who disbelieve,

“The stone which the builders rejected,
This became the very corner stone,”

“A stone of stumbling and a rock of offense.”

They stumble because they are disobedient to the word, and to this stumbling they were also appointed. (1 Peter 2:7-8)

Here you have Peter continuing to quote Old Testament passages. And now he moves to a contrast. He starts out by saying, “This precious value,” the value of Christ as a precious, living, chosen cornerstone, “belongs to those who believe.” What he’s saying is that it belongs to you if you believe He’s precious.

One of our privileges as believers is affection for Christ. He’s not only a precious cornerstone to God, but precious to us. And this preciousness is felt only by believers. For those who disbelieve, they don’t see Him as precious. They don’t have any affection for Him. For them, He’s a stone of stumbling and a rock of offense.

But to us He is beloved, honored, esteemed, precious, priceless, prized above everything. And if you say there is anything in your life more precious than Jesus Christ, you can’t be a Christian. He is the most precious.

Look at a few passages:

Jesus said to them, “If God were your Father, you would love Me, for I proceeded forth and have come from God, for I have not even come of Myself, but He sent Me.” (John 8:42)

He who has My commandments and keeps them is the one who loves Me; and he who loves Me will be loved by My Father, and I will love him and will disclose Myself to him. (John 14:21)

For the Father Himself loves you, because you have loved Me and have believed that I came forth from the Father. (John 16:27)

To the people of Israel, Christ was worthless. But they were wrong. To God and to us He is precious.

But this preciousness is only for those who believe. To those who disbelieve, He is a stone of stumbling and a rock of offense. This refers to judgment. He makes men fall. Look at what Jesus says:

Everyone who falls on that stone will be broken to pieces, but on whomever it falls, it will scatter him like dust. (Luke 20:18)

Christ is either the cornerstone or the crushing stone, depending on whether you believe or disbelieve.

The point is this: We have the privilege of affection for Christ. There is a world of people who reject Him. For them He is an unacceptable stone. He will not be the cornerstone in the religious temple they will build. They throw Him aside and they will stumble over Him and be crushed to powder by Him in judgment. Why? Because they were disobedient to the gospel.

But to us, by God’s goodness and His grace, Christ is no stone of stumbling. He is no rock of offense. He is a precious, living cornerstone, and we love Him. That is a great privilege.

This post is based on a sermon Dr. MacArthur preached in 1989, titled “The Believer’s Privileges, Part 4: Security and Affection.” In addition to serving as the pastor of Grace Community Church and the voice of Grace to You, Dr. MacArthur is the chancellor of The Master’s University in Santa Clarita, Calif. You can learn more about TMU at masters.edu.