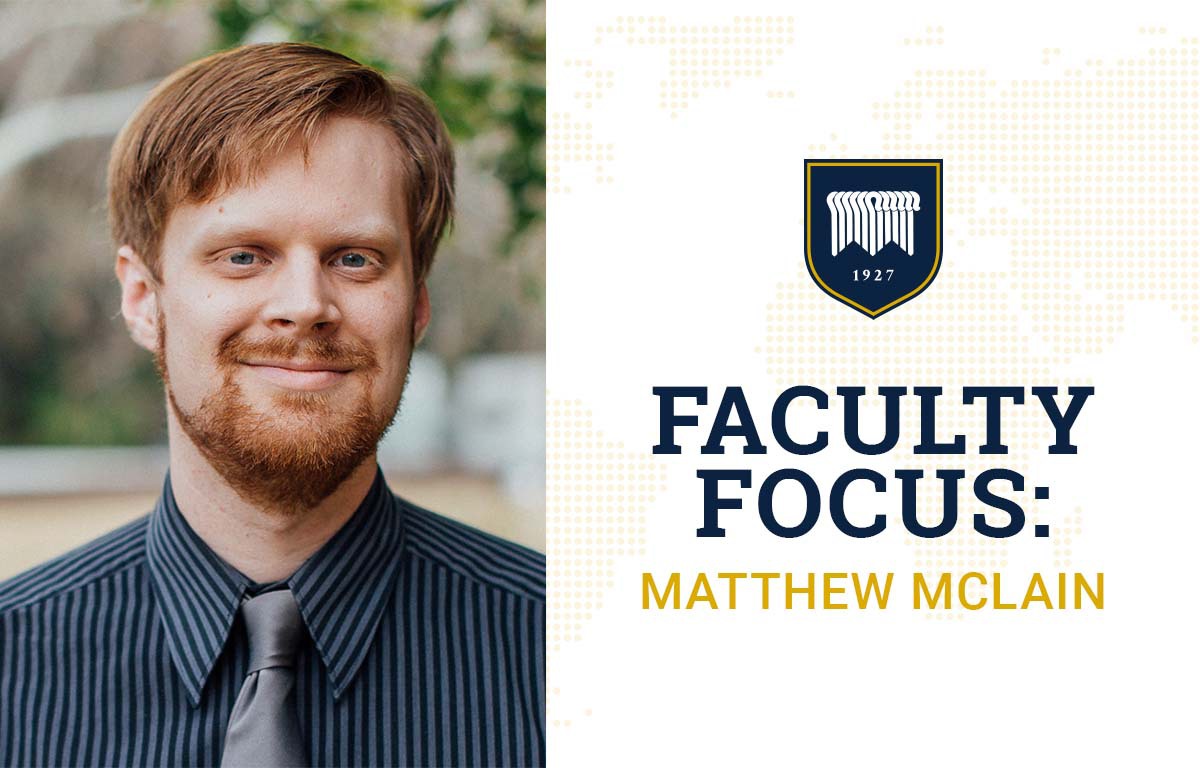 This fall, Dr. Matthew McLain was honored with Cedarville University’s 2021 Young Alumnus of the Year Award.

McLain is an associate professor of biology and geology at The Master’s University. He graduated from Cedarville in 2012 with a degree in geology, and then he went on to earn a doctorate in earth sciences from Loma Linda University.

According to Cedarville’s website, this award is offered annually to someone who graduated within the last 10 years, has “made an outstanding contribution to his/her avocation or occupation” and “made such accomplishments while maintaining a Christ-honoring perspective in every aspect of their lives.”

The award, which now hangs in McLain’s office, says, “In recognition of his outstanding contributions to the field of paleontology and his faithful advancement of the Kingdom for the Word of God and the Testimony of Jesus Christ.”

Dr. Matthew McLain has taught at TMU since 2016.

In its article featuring McLain and the other recipients of the school’s annual awards, Cedarville cited McLain’s extensive publication record, active participation in academic conferences, and work advising Ph.D. students.

“I was excited. I wasn’t expecting it at all,” McLain says. “You hear about people getting those kinds of awards, and you think, ‘Oh yeah, it’s because they’re out there making huge medical advances or reaching thousands of people through missionary work.’ You don’t think you could be on that list.”

While visiting his alma mater in September for the awards ceremony, McLain spoke at Cedarville’s chapel, delivering a message titled “[Fossils & the Glory of God](https://www.youtube.com/watch?v=uNt9LK78kys).” In a way, the message encapsulated McLain’s qualities as a scientist for which he was recognized. It combined his deep and passionate knowledge of the science of paleontology with his desire to pursue that field as a means of glorifying God – and to communicate paleontology in such a way that students are drawn into this perspective of viewing science as worship.

McLain has taught at TMU since 2016, while also continuing to take part in paleontological fieldwork and research. In addition, he serves as the youth pastor of Santa Clarita Baptist Church and has four children with his wife, Jessica.

Reflecting on his career so far, McLain expressed a deep sense of gratitude.

He said recently, “I am very thankful for how the Lord has worked in my life to allow me to be able to do paleontology in a way that glorifies Him, for how I was prepared by Cedarville University and Loma Linda University to do good science while affirming the truths of Scripture, and for how The Master’s University has enabled me to continue in my paleontological research and communication of faith and science discussions.”

To learn more about geoscience at The Master’s University, visit the major’s [home page](https://www.masters.edu/programs/geology.html).