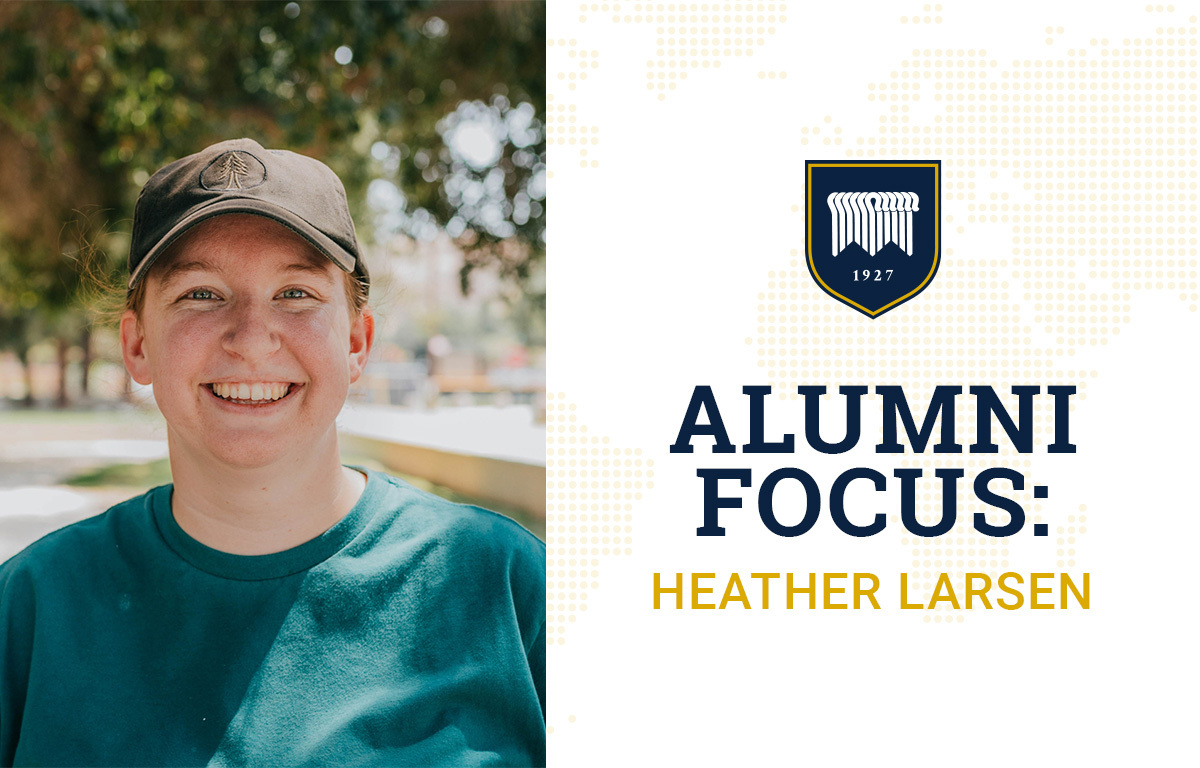 When Heather Larsen was a high school sophomore, two things happened: Marvel Studios released “The Avengers,” and her church hosted a movie-themed costume contest. On a whim, Larsen decided to build a full Iron Man suit out of foam and cardboard. She spent maybe $300 on the project and won $25 from the contest — but since then, the return on investment has been considerable.

“That costume just started so many things,” Larsen says.

In 2019, Larsen graduated from The Master’s University, having worked on a wide variety of film and theater projects as a student. Her time at TMU was a process of discovering her creative gifts and passions and learning how she wanted to use them as a witness for Christ in the workplace. So far, that has included professional set builds for a YouTube channel, an amusement park and a handful of award shows. And this fall (while TMU Theatre Arts prepared to put on “It’s a Wonderful Life,” [which opens Friday](https://www.masters.edu/performing-arts/theatre-arts)), Larsen was starting a Master of Fine Arts program at San Diego State University to learn still more about her craft, building on the foundation she laid at TMU.

For Larsen, coming to TMU was a natural choice. When she was 4, her father, David Larsen, started working at TMU as the head athletic trainer and a professor of kinesiology. She says she “basically grew up” in the school’s gymnasium, with student-athletes providing pro bono babysitting. Larsen loved sports, but when it came time to decide on a major for college, she heard about TMU’s Cinema & Digital Arts program, headed by Professor Matt Green.

During Larsen’s freshman year, she watched as people she knew joined TMU Theatre Arts. From doing projects like the Iron Man suit, Larsen knew she enjoyed building things, so she decided to join the program’s crew. And she immediately loved it.

“Getting to express yourself creatively is so much fun. And the heart that (Theatre Arts Director) Tricia Hulet has behind that program really impressed me,” Larsen says. “She was encouraging us with the idea that theater is about serving other people. I was attracted to that, and I also liked working with other students and getting to know people personally.”

During Larsen’s second year, she learned stage lighting, and she eventually became the crew lead for lighting design. “And then I started thinking, ‘Well, I can design the lights — but I want to design the set, too,’” she says. So, Larsen started working on set design closely with Hulet, who mentored Larsen and influenced Larsen’s taste as a designer.

Then came the pivotal production: “Sabrina Fair.” Hulet turned the reins over to Larsen, giving her carte blanche to design the play’s set.

“It was so cool to go from an idea in my head, to a sketch, to a digital drawing, to drawn plans,” Larsen says. “And then during set build, I gave those plans to people, and I sat back and watched the walls go up. And then I sat on opening night and saw the set with the lights on it, and I got to enjoy this completed idea that started off as just a possibility gnawing away in my head.”

While Larsen was gaining and practicing these skills in theater, she was also actively involved in film production through the Cinema & Digital Arts program.

“Being on these sets, you get to interact with a lot of industry professionals,” Larsen says. “The first two short films had a production designer who was a TMU graduate, and I got to learn under her. But after that, Prof. Green said, ‘You’re going to do the production design now.’ So I got to do production design for the films as well as the theater shows. And I’m super grateful to have had the opportunity to do both. At a lot of other schools, I probably would have had to pick.”

As a senior, Larsen also started using her new skills beyond TMU, building sets for a YouTube channel. She kept working at her fledgling career after graduation, doing builds for events at Six Flags Magic Mountain. Then she joined a shop in Burbank that works on events like the Grammys and the Golden Globes.

“I walked in my first day and I was the youngest person in the shop by 15 years. I was also the only female carpenter, and the only Christian,” Larsen says. “But they respected my work ethic, and I started to build some really good relationships there.”

As she has transitioned to working professionally, Larsen continues to apply lessons she learned at TMU. One of the most important has been from Hulet.

“Tricia would always say, ‘If you and another person are painting a wall together, and you don’t know them, just start asking questions,’” Larsen says. “I’ve been able to take that habit into other workplaces. Over the course of weeks and months, I’ve gotten to know people well and build relationships — to the point that I’ve had someone ask me out of the blue, ‘Why is there suffering in the world?’ If you’ve established yourself with a good reputation, they’ll listen to what you have to say.”

Larsen is also grateful for everything she learned in her Cinema & Digital Arts classes, which gave her a well-rounded knowledge of every aspect of the production process — something she believes is important in the industry.

Green, the CDA director, says that this broad exposure, which gave Larsen the freedom to experiment and discover what she wants to do professionally, is an important part of the program’s design.

“Everybody is gifted differently,” he says. “I want students to come here and find out what their gifts are. Some of them come thinking, ‘I want to be a director.’ Then they direct a couple things and go, ‘I don’t want to do that ever again. But I really love doing this over here.’ I want students to feel safe to make mistakes, try different things, and experiment, so they can figure out what God has gifted them to do.”

Larsen knows that’s exactly what happened to her.

This fall, Larsen began a three-year graduate program at San Diego State studying production design and technology. And to this day, after everything she has worked on, the Iron Man suit remains one of her favorite projects. As much as anything else, it symbolizes advice that Larsen remembers from her very first crew meeting with Hulet: take every opportunity you get.

“Say yes to things, because you’ll never be this young again or have this much energy again,” Larsen says. “Master’s is the most unique place for young believers to be able to grow and develop alongside other people. You can really challenge each other and work with each other like at no other college.”