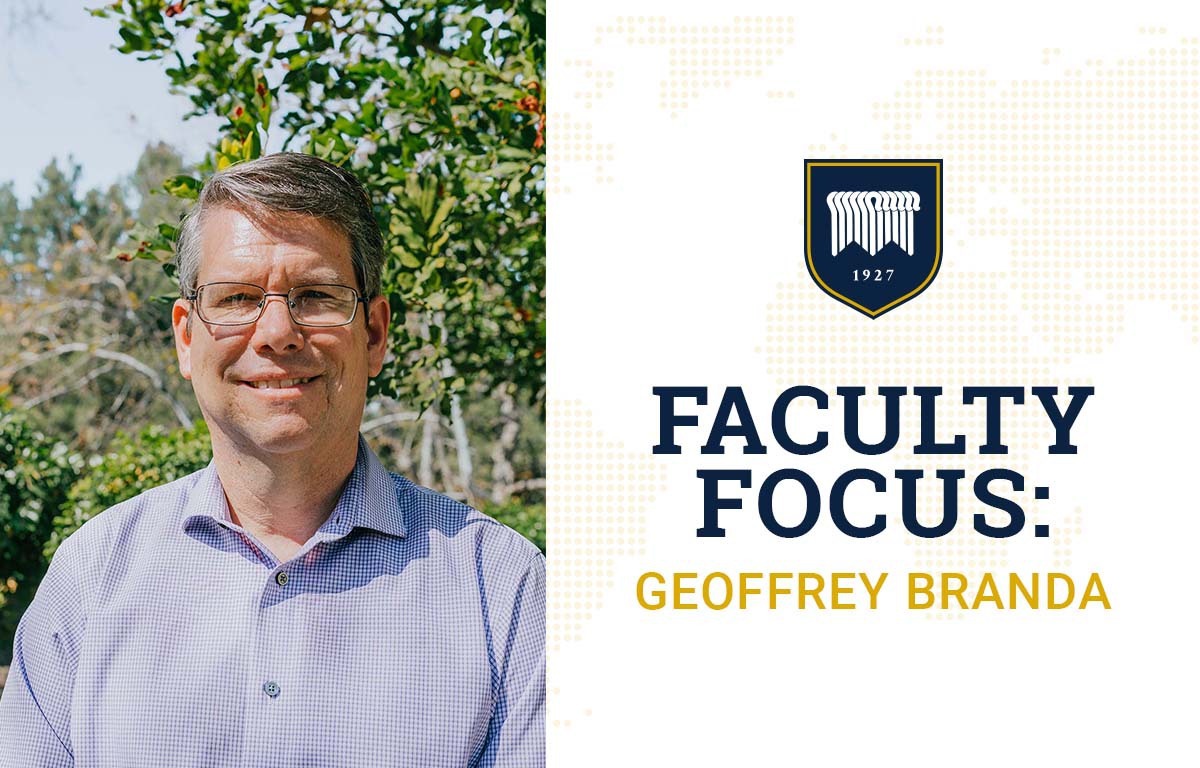 At one point, Geoffrey Branda was the chief financial officer of a company with 850 employees and a $1.5 billion portfolio. It was the largest privately owned auto finance company in the U.S., and as one of its executives, Branda seemed to be at the peak of his career.

But even then, success was never what Branda enjoyed most about his work. Throughout his 30 years in the business world, Branda’s real passion was mentorship. And now, as a professor in TMU’s business department, he is thrilled to be using his decades of experience in the industry to help prepare students to be compelling witnesses for Christ in their future careers.

Originally from North Hollywood, Branda moved to Santa Clarita in 1974 when he was 7 years old. His parents loved the Lord, and he grew up attending good churches. But he believes he wasn’t saved until he was a teenager and a student at Hart High School.

It was also in high school that he discovered his interest in accounting. After graduation, he decided to attend UCLA, enrolling in a program that emphasized the application of math to business. While there, he met his future wife, Mae, to whom he has now been married for 30 years.

After working for a big accounting firm straight out of college, Branda went to work for Nissan’s finance company. From there, his career grew.

He picked up new skills, was repeatedly promoted, and went back to UCLA to earn his MBA. After nearly eight years at Nissan, Branda joined a small, family-owned finance company as CFO. For the first time, he was an executive.

“We had about 80 employees and about $90 million in loans — which may sound like a lot of money, but it’s actually small,” Branda says. “At first it was only in California, but the company wanted to replicate itself around the country. I was part of the team that helped make that happen. We grew about 30% every year. That means we were doubling every three years, and I was there for 12.”

By all typical measures, Branda was having a highly successful career. But early on, he discovered something he enjoyed more than the “business” part of his work: mentorship.

“I enjoyed taking new people and teaching them how to be successful in their job,” he says. “That continued in my career, no matter how high up I got. I would run things like a book of the month club, where we would grab a business book and talk through it. I taught classes and seminars. I always enjoyed that more than making business decisions.”

So, after gaining decades of experience at a number of companies, Branda came to work for TMU in 2020. He is now in his second semester as a full-time assistant professor of business.

“I can teach students how to be successful Christian businesspeople because I’ve been gaining experience in that for the past 30 years,” he says.

From exciting business opportunities to challenging company environments, Branda has seen it all. He has also seen how working hard and loving people with Christlike love can make a difference in the workplace. And now he is excited to train up the next generation of excellent Christian businesspeople in exactly the place he wants to be.

“I don’t want to teach anywhere else,” Branda says. “I look back at the past and I’m thankful to the Lord for all the good and difficult things He’s had me go through. Now I can use those experiences to prepare our students, both academically and spiritually, for the battle ahead.”