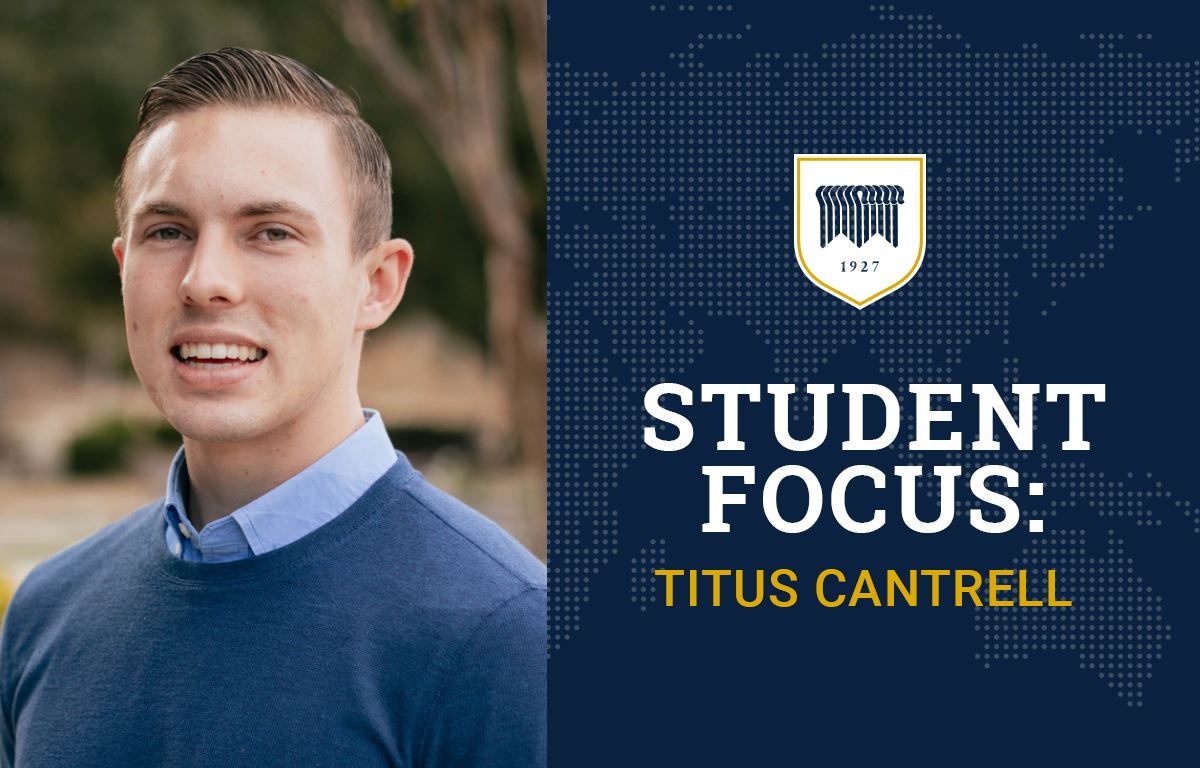 Coming all the way from South Africa, Titus Cantrell studies Business Administration at TMU. Growing up, Titus dreamed of attending Master’s since both of his parents came to TMU and met while they were students. Titus’s family are missionaries to South Africa, doing strategic church planting and leadership training. While being raised on the mission field, Titus remembers that his parents often told him stories of their time at TMU and of the intentional discipleship they experienced.

“I always knew that I wanted to learn from the godly professors at Master’s, and that was confirmed for me when my friends and older brother started attending secular universities in South Africa,” says Titus. “I saw the way that they were persecuted for their faith, and they had to question everything they were taught to see if it was biblical.”

For Titus, Master’s was the exact opposite, with professors who truly cared about their students and were committed to helping them grow into godly men and women. However, the funds to attend Master’s just weren’t there for the Cantrell family, so Titus worked extremely hard throughout high school to get good grades, score well on the SAT, and land several jobs to save money for school. Still, the funds weren’t adding up, so Titus started to give up on his dream to attend TMU.

In February 2018, Titus received an email encouraging him to apply for the Presidential Scholarship. He applied, and—much to his surprise—he was chosen.

“I immediately leapt out of bed and jumped into the air, pumping my fist. God had provided. I was going to Master’s,” says Titus. “I ran into the kitchen to tell my parents, downstairs to tell my grandparents, to the phone to tell my Bible study group that had been praying, and everywhere else I could think of to spread the joyful news. That night we had a celebration dinner as a family and praised God for his great faithfulness.”

Along with the Presidential Scholarship, he received funds from the Founders Scholarship and a gift from a church in Texas. Through these scholarships and three summer jobs, Titus entered TMU for the Fall semester.

“I have felt His guiding hand in every step I have taken so far, and I am often brought to tears by the ways that God has shown his faithfulness to me despite my unworthiness,” says Titus.

Transitioning to California was difficult for Titus. It required leaving his family, friends, and the country he had known for the last seventeen years.

“As I walked through the security check and waved goodbye to my four siblings, my parents, and my grandparents, a deep sense of loss and loneliness swept over me,” says Titus. “As I considered the godly legacy left to me by many generations of faithful Christian ancestors and the countless blessings that had been heaped on me in my early years, I was brought to tears again and could only pray that God would be my guide and comforter.”

Having now experienced life at TMU, Titus is beyond grateful to be attending the University, saying he has grown more spiritually in his months here than the rest of his life before. Titus loves the relationships he has been able to build at TMU, both with professors and with other students.

“My favorite part of life at TMU is being a part of The Master’s University Chorale,” says Titus, whose mother also sang in chorale during her time at TMU. “I have learned so much under Dr. Plew’s direction. He doesn’t merely teach us to sing well together; he facilitates a sense of family in the chorale and ensures that each member is well cared for.”

Coming from South Africa where there are no Christian universities, Titus is overwhelmed by the faithfully biblical instruction available on campus and encourages other students to appreciate how unique the University is.

Second of five children, Titus enjoys sports, the outdoors, reading, flipping on his trampoline, and building LEGO robots. Titus is also an avid rugby player, and he would love to play for a team in the States, or even start a team at Master’s. He hopes to graduate in 2022 and to use his time at Master’s to prepare him to return to South Africa and be part of an exciting development: Genesis Christian University in Johannesburg.

“I believe that my upbringing in South Africa has prepared me to influence that country with Christian education and provide something that is nonexistent in the entire country: a Christian liberal arts program,” says Titus. “My goal over the next four years is to redeem every minute of time that I am given to prepare me to serve Christ’s kingdom. I want my life to be centered around service to my king rather than personal comfort.”

Titus is tremendously grateful to the donors and God’s provision for him to attend Master’s and is excited to maximize his time and education for his future goals.

“To the generous donors who support this school, I would say thank you! Your time and funds could not be better spent than on influencing young people for Christ,” says Titus. “I know that to whom much is given, much will be required, and I am determined to make the most of the gifts I have received from God and you.”