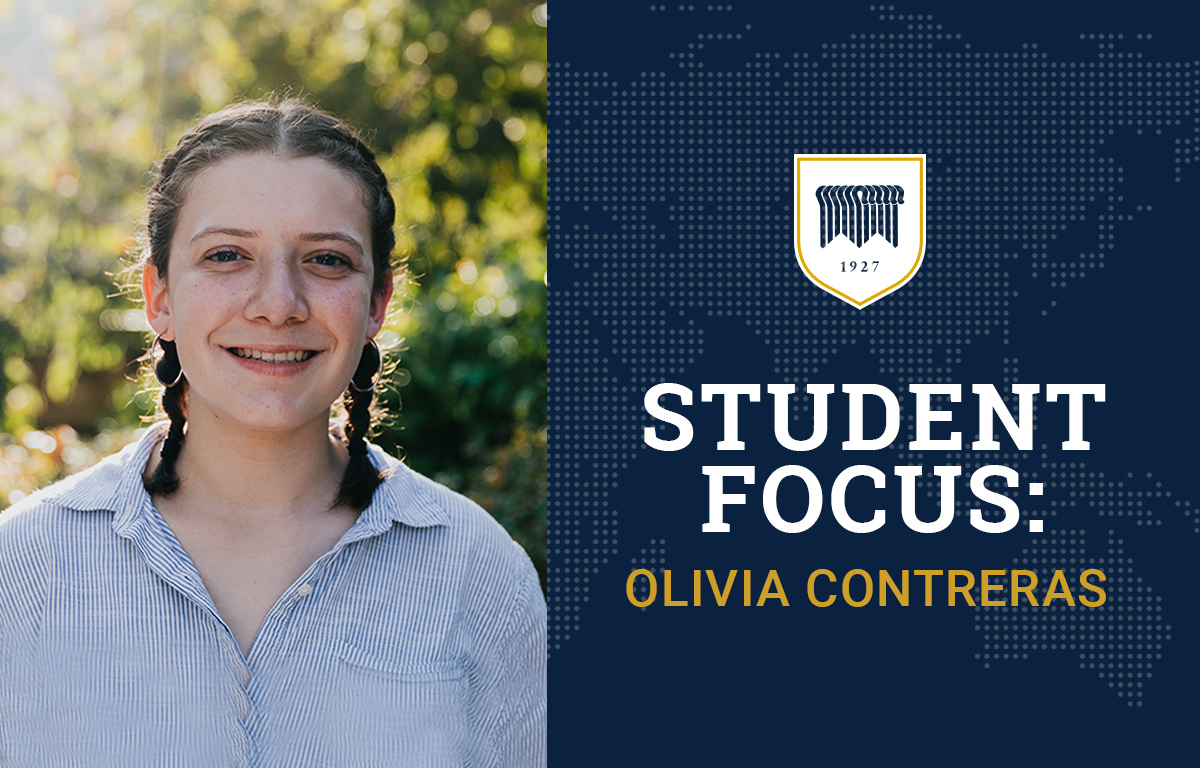 The soon-to-be college student had been scrolling casually through her email in April when she encountered a stunning message: She’d been awarded a scholarship through a new program at The Master’s University.

The implication was significant. She would now be able to attend the school she’d heard so much about from her parents, Luis and Robin, both of whom graduated from Master’s before moving to Mexico City, where Luis is a pastor and seminary professor.

Reading the news, Contreras leapt off her sofa and ran through the house. Tears streamed down her face. She offered prayers of thanksgiving for a scholarship that would allow her to engage in the kind of Christ-centered community she’d come to cherish after God saved her in middle school.

“I just want everyone to know how great of a God we serve,” says Contreras, who arrived at TMU this fall thanks in part to The Master’s Global Scholarship. “Not just because He provided everything that I needed, because He could have not done that too, you know, and He would still be a good God.”

With the support of generous donors, TMU started The Master’s Global Scholarship this fall with an ambitious goal: to preserve faithfulness and doctrinal integrity worldwide by educating the next generation of leaders. The program targets student populations most closely aligned with the University’s mission. This includes international students with proven affiliation to TMU through ministries like The Master’s Academy International (TMAI).

That’s where the Contreras family comes in. Since graduating from The Master’s Seminary in 2002, Luis has been a professor at Word of Grace Biblical Seminary — a TMAI member school in Mexico City.

It isn’t surprising, then, that Olivia has listened to more than a few MacArthur sermons in her lifetime. She says she’s been particularly blessed by MacArthur’s commitment to the authority of Scripture, and she’s thankful for the role her family has been able to play in his far-reaching ministry.

Recently, she became a member at Grace Community Church where MacArthur preaches. It’s a commitment she would have run from only a few years ago.

In middle school, Contreras says it became clear that she wasn’t a Christian and that she didn’t desire to please God. “I was a slave to sin,” Contreras says.

It also meant that despite the stories she’d always enjoyed about Luis’ and Robin’s experiences at The Master’s University, she did not want to follow in their footsteps.

“I just wanted to get out of my Christian bubble because I went to a Christian school and I was at church all the time,” she says. “In my sin, I just wanted to be around people who wouldn’t make me feel guilty for what I was doing.”

Meanwhile, her parents continued to display Christ’s love in the way they corrected her, always emphasizing a need for heart change rather than mere outward conformity. Contreras was a sinner, they said, and Jesus was the only solution.

As Contreras prepared for high school, the message began to take root. She saw her sin, and she didn’t like it. She wanted to change, but she found the task impossible — until she placed her faith in Christ, and His life, death and resurrection on her behalf.

“God really taught me that I couldn’t change on my own and that I really needed Him, that there was no hope apart from Him,” says Contreras, who can’t pinpoint the day of her conversion, but she places it sometime during the winter of her final year of middle school.

That summer Contreras attended Camp Regen, a week-long high school gathering hosted by MacArthur and Grace Community Church. Throughout the week, she met other teens who loved God, and she felt convicted that her choice in friends hadn’t always been the best.

“God was showing me how I needed friends who would build me up and call me out when they saw me failing because I didn’t have that before,” Contreras says. “I realized how I needed a community of believers around me who would encourage me and point me to Christ.”

In the years that followed, Contreras’ desire to learn, memorize and apply God’s Word grew. She began to surround herself with people who shared her passion for Christ.

That principle was also a driving force when it came to choosing a college.

Contreras knew she’d be able to build strong relationships at Master’s. She knew she’d learn about the Bible and grow in her faith. But as her family assessed the possibility, they didn’t believe they could make it work financially.

Contreras had received various scholarships, but the numbers still didn’t add up. Then in April, she found an email that changed the equation.

“We couldn’t believe it,” Luis says of hearing about the funds provided through The Master’s Global Scholarship. “We were so joyful and thankful for the Lord’s grace through the generosity of TMU. Along with Olivia’s two siblings, our prayer and dream has always been that the three of them would attend TMU because, from what we know, it is the best place where our kids can be equipped to serve the Lord wherever He places them. Of course, we are biased because we love TMU, Dr. MacArthur and all the faculty and staff.”

So far, Contreras says the experience has outpaced her expectations. She’s been humbled, she says, to realize how much she still doesn’t know about the Bible, and she’s made the kind of friends she was hoping for.

In fact, relationships are a crucial reason Contreras hopes to one day earn a master’s degree in biblical counseling. In the meantime, she is majoring in music at TMU.

“I love to get to know people and find out how they’re doing spiritually and how I can serve them and point them to Christ,” she says.
Thanks to the generosity of TMU’s donors, she has the opportunity to be equipped to do just that.