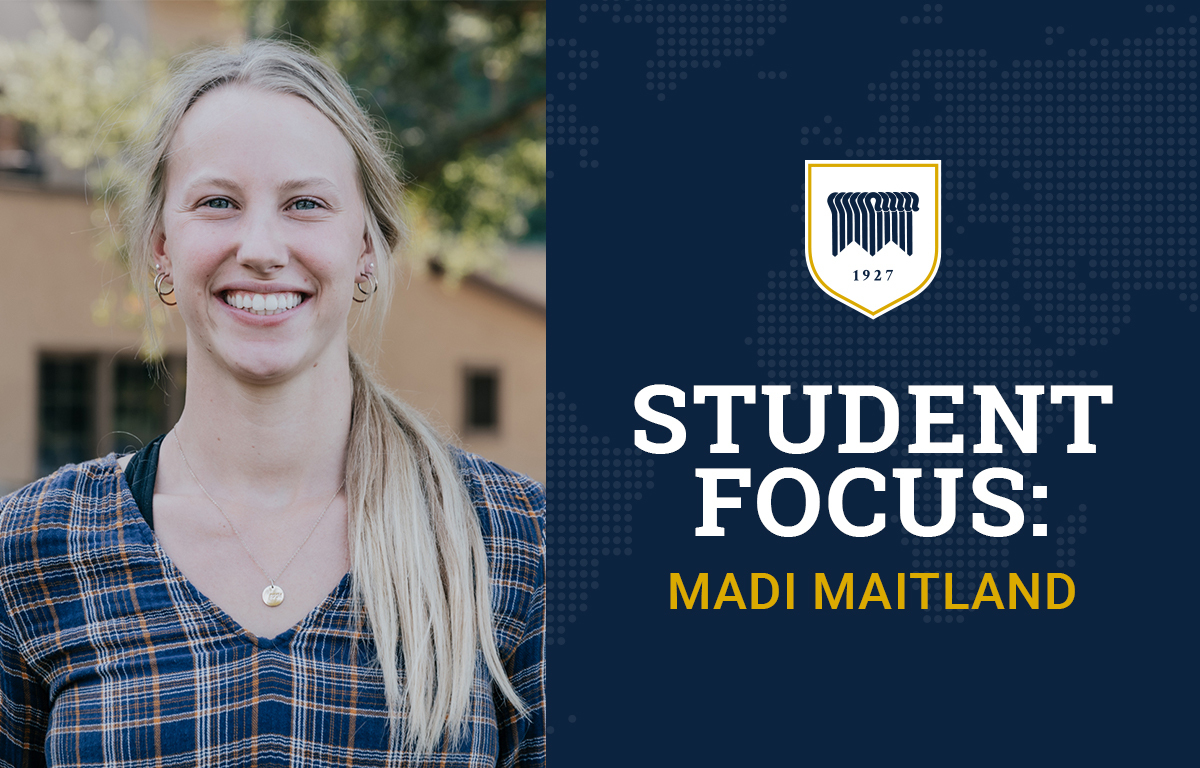 Madi Maitland hates the person she used to be.

She describes that person, the Madi of four years ago, as angry and selfish and often at odds with her parents. She felt trapped, attending The Master’s University because of an athletic scholarship she no longer wanted. She believed in God but had no interest in listening to Christ.

That version of Madi never could have faced the sudden death of her father, Myke, in January — not without shattering into a million irreparable pieces. And that Madi wouldn’t have returned to the Mustang women’s volleyball team days later to show her teammates that God was good, even in excruciating pain.

As she prepares to graduate from TMU next month, Madi can’t pinpoint the moment of her salvation. But sometime after her freshman year, Christ revealed her need to repent and believe. The proof has played out over the past three years in her love for God, Scripture and people — and in the faith she’s displayed in the hardest moments of her life.

Growing up in Santa Clarita, Madi’s life revolved around church — youth groups and potlucks serving as the setting of many friendships and pleasant memories. But that changed in high school as battle lines were drawn at home.

Madi argued with her parents, Myke and Heidi, about curfews, rules and who she hung out with. As a senior, she was grounded for sneaking out to a party. At times, she ignored her parents altogether.

Another point of contention was TMU. As a sophomore, Madi had committed to play volleyball for the Mustangs, but as time went on, the school lost its appeal. She wanted to attend a big school — farther from home — where she’d enjoy a new level of freedom. But there was a problem. Madi had received a considerable scholarship at Master’s, and her parents said they wouldn’t increase their contribution if she went elsewhere. Madi felt stuck. A sense of bitterness followed, and she stopped attending church.

Things didn’t improve at TMU. As a freshman, Madi spent little time on campus, retreating to her high school friends and keeping her new teammates at arm’s length. TMU’s chapel services annoyed her. Miserable, she wanted to transfer.

![](/images/madi-1.jpg)
Madi Maitland has totaled 769 kills in her four-year career at TMU.

That summer, drawn by the opportunity to travel, Madi went on a missions trip to Greece. As she worked with refugees from Iran and Iraq, she saw their commitment to Christ despite persecution. “I remember how surreal that was,” Madi says. “These people were willing to suffer, and here I am, like, ‘Yeah, I believe in God, but I won’t go all in.’”

“It was a wake-up call for me that I wasn’t saved,” she says.

Madi doesn’t know the moment of her salvation, but she returned from Greece with new desires. Over time, she began to enjoy studying the Bible and attending church and chapel. What’s more, she befriended her teammates. “It was like, ‘We’re a team,’” Madi says. “‘We’re sisters.’”

Madi’s family also saw changes. Madi was respectful and quick to apologize — and she raved about her Bible classes. “You could see and hear her excitement,” says Madi’s younger sister, Molli. “It was more than just knowing the facts.”

Madi wasn’t — and isn’t — perfect. But the next three years were transformational. On the volleyball team, she developed into a leader. In classes and chapel, she learned to trust the sufficiency of Scripture to address every area of life. She met friends who encouraged her walk with Christ. And she began dating classmate Max Maitland, whom, in January 2020, she married.

“At Master’s, I learned how to honor the Lord in everything,” Madi says. “Not just in ministry, but like, ‘How can I be an athlete who honors the Lord? How can I be a godly friend? A godly wife?’”

Another shift came in the dynamic between Madi and Myke. For years, the relationship had been strained: Madi was a rebellious teenager, and Myke called her on it. But in recent years, they made up for lost time.

Madi began texting Myke to ask how he interpreted certain passages of Scripture. Sometimes they agreed. Sometimes it led to friendly debates.

Their time together was both planned — like double dates at a favorite Greek restaurant — and spontaneous, as when Myke, while delivering meals for Postmates, dropped in at Madi’s apartment. One day, he convinced her to join him on a delivery. One delivery turned into two. Two into three.

So much had changed.

“My dad’s hilarious,” Madi says now. “I’ve always been told that of the four kids, I’m the most like him. I think that’s a really big compliment.”

On Jan. 2, 2021, Madi and Max were in San Diego celebrating their one-year wedding anniversary, when Madi received a phone call. Myke had apparently suffered a stroke.

The young couple packed up and started driving home, but they soon received another call: Myke had passed away. They exited the freeway and sobbed.

“Longest three hours of my life,” Madi says of the ride home.

As time passed, Madi encountered a mix of emotions. She grieved for the loss of a godly, goofy, loving father, who ultimately had died of a heart attack at 52; she grieved most of all that after 26 years of marriage, her mother was alone. But Madi also felt peace. Myke had always emphasized God’s sovereignty, a truth that now brought comfort.

“He was having fun here,” Madi says, “but he’s so much happier in heaven.”

Still mourning, Madi faced a decision. TMU’s volleyball season, delayed by COVID-19, was set to begin — and Myke had been Madi’s biggest fan. She couldn’t imagine playing without him. Madi intended to quit, even scheduling a meeting to inform her coach, but as she prayed about it, she changed her mind.

“I was like, ‘That’s quitting. That’s not what my dad would want, and I don’t think that’s what would bring God the most glory.’”

![](/images/madi-3.jpg)
Madi and Max on one of many double dates with Madi’s parents, Heidi and Myke Fay.

Ultimately, Madi wanted to demonstrate what it looked like to honor God during a trial, a goal she felt she could best accomplish by pouring herself into the team — by going all in.

So, she celebrated her teammates’ successes and encouraged them after mistakes. She invited freshmen into her home for pancakes and told them to maximize their time at TMU. And she played with energy, pumping her fists and yelling after every Mustang point — of which there were many. Maitland was among the team’s leaders in kills, helping TMU win the Golden State Athletic Conference East Division title.

“I’m so happy she came back,” says TMU head coach Annett Davis, whose team is set to play April 17 in the opening round of the NAIA national tournament. “We all know she’s a great athlete. But there’s no greater legacy to leave than one that honors Christ in everything.”

The Mustangs rallied around Madi, too. In January, the team attended Myke’s memorial service. Sometimes, they encouraged Madi with words; mostly, they provided a distraction and an opportunity to laugh.

Of course, the emotions ebbed and flowed. Madi especially felt Myke’s absence after the season opener when he wasn’t around to analyze her performance. She would have loved one final debrief.

But Madi hasn’t focused on herself. “One day she sent Bible verses in our family group chat,” says Molli, Madi’s sister. “She reminded us that Christ is our stronghold and that when He takes people home, it’s for His glory.”

Madi admits that the person she used to be wouldn’t have responded this way. That person would have fallen apart.

To learn more about how you or someone you know can attend The Master’s University, [click here](https://www.masters.edu/requestinfo).