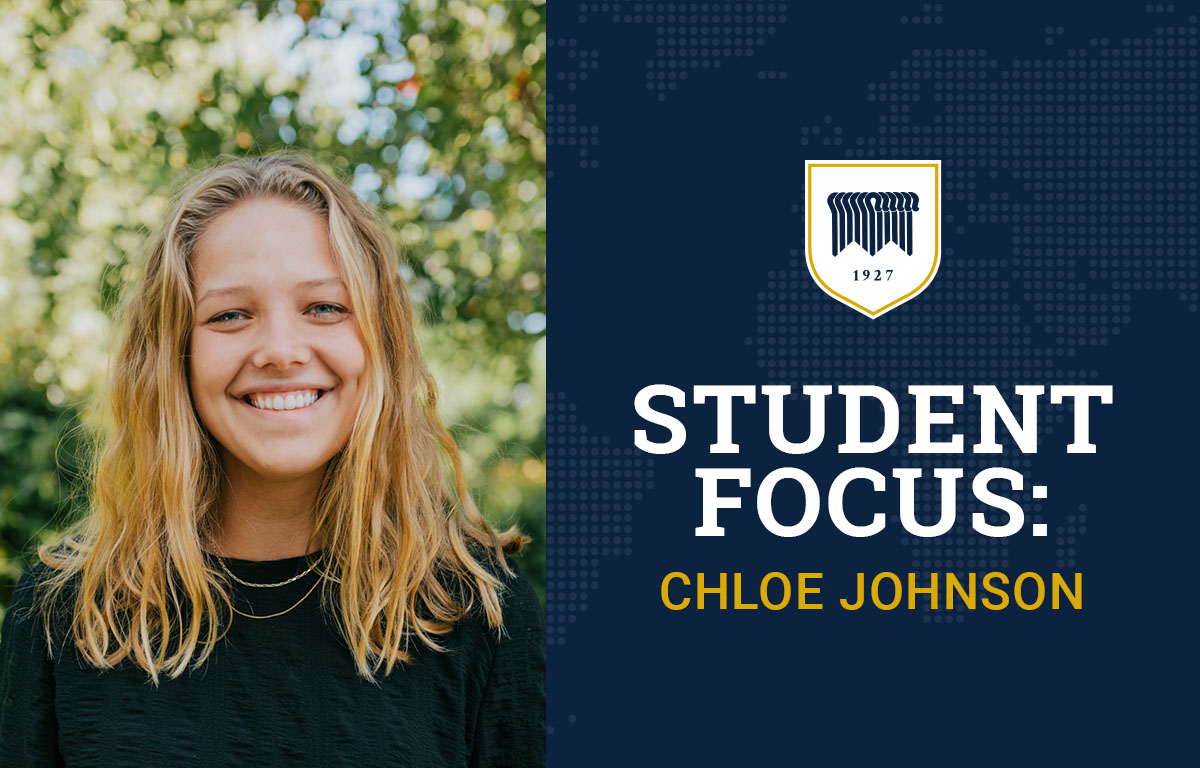 It was during two volleyball workouts that Chloe Johnson’s decision about where to attend college took a pivotal turn.

Each workout took place at a Christian university. Each included current members of the host school’s intercollegiate team. Each event previewed an attractive option for where Johnson, a high-schooler at the time, might spend the next four years of her life.

But, for all the similarities, Johnson sensed a crucial difference.

It was in the way each school’s athletes talked to each other.

“Just the things the girls were talking about (at one of the workouts), the way they talked to each other, the language, too, wasn’t the best,” Johnson says. “But when I came to The Master’s University, everyone was so welcoming, and everything came back to the Lord. They were interested in you as a person and as an athlete and were very uplifting.”

There was another factor in TMU’s favor. Johnson says one of her cousins, Rebecca Swenning, had loved attending Master’s. Swenning played for TMU’s indoor and beach volleyball teams, graduating in 2020.

“She was super excited about the lessons she learned through chapel and through classes,” Johnson says. “She also talked about how she made so many great relationships, learned so much and was really pushed in her walk with the Lord.”

Hoping for a similar experience, Johnson enrolled at Master’s in the fall of 2019. Looking back, she says the interactions she had at TMU’s workout were an accurate snapshot of what was to come in terms of relationships and spiritual growth. The women who would become her teammates have lived up to her initial impressions.

“They’ve always been intentional with me, wanting me to be included,” says Johnson, who played indoor and beach volleyball as a freshman before transitioning to beach-only as a sophomore. “They’ve led me well.”

What’s more, the culture in TMU’s Athletic Department has been as Christ-centered as Johnson first suspected.

Before each beach volleyball season, players are assigned a prayer partner, someone to check in with and care for over the course of a long, grueling year. It can be tempting to let spiritual disciplines fall to the curb amid an avalanche of homework, travel, games and practices. The goal is to help each player stay on track in her walk with Christ.

TMU’s beach team also has a group chat where players regularly share prayer requests. It gives the Mustangs an opportunity to be informed on how to best pray for each other. Johnson says the process also helps build unity.

“It deepens the relationships on the team, for sure, because we’re learning about each other’s lives,” Johnson says. “On a team, you’re with people a lot. And if you get frustrated with someone, it helps knowing, ‘Hey, this person has a lot going on.’ And if you start praying for someone, it softens your heart toward them.”

Sometimes in the group chat, Annett Davis, TMU’s beach and indoor women’s volleyball head coach, posts messages outlining what she’s learning in her own walk with Christ, something Johnson says has been encouraging.

Johnson has also formed strong relationships outside of athletics. She says that because of TMU’s unwavering commitment to Christ and Scripture, it tends to attract students who hold a shared purpose.

“We’re committed to Scripture on all levels, which brings a certain type of student,” says Johnson, a business administration major. “My experience at Master’s has been super sweet because most of the students are all chasing after the same goal and are seeking to grow in their relationship with Christ. And when you have everyone around you pursuing the same thing, it just accelerates your own relationship with the Lord because you’re watching people do that, and they’re keeping you accountable and they’re encouraging you, and then you’re doing the same to them.

“As a result, you’re growing more than you would on your own.”

Johnson’s growth has also been fueled by chapel, which takes place three times per week at TMU, featuring speakers from across the country. “If you’re willing to listen to what they have to say and to apply it, you’re going to grow in so many ways,” Johnson says.

One area of growth that Johnson has experienced at TMU has been a willingness to step out of her comfort zone. Growing up in Santa Rosa Valley, California, Johnson was home-schooled. She says she arrived at Master’s hesitant to speak up on the court or in the classroom, afraid of hearing her own voice.

“My dad said he’d pay me to ask a question in class because I didn’t want to do it,” Johnson says.

She isn’t sure what happened, but something clicked between her freshman and sophomore years. In the classroom, she realized it was OK to ask a “dumb” question, as long as she learned from it. She says, too, that the professors have helped give her confidence (“If you’re willing to go out of your way to ask questions and make yourself known to the professors, they are so willing to come alongside you and assist you and push you forward in the ways that you need to be built up,” she says). And on the volleyball court, Johnson has come to understand that she doesn’t need to wait until she’s an upperclassman to lead.

This past season, TMU’s new freshmen were already watching to see how Johnson and the team’s other veterans treated their coaches and spoke to their teammates.

In just two years, Johnson went from watching TMU athletes to being someone others can look to for setting the standard.

To learn more about how you can be recruited to join one of TMU’s 17 intercollegiate athletic teams, [click here](https://gomustangs.com/).