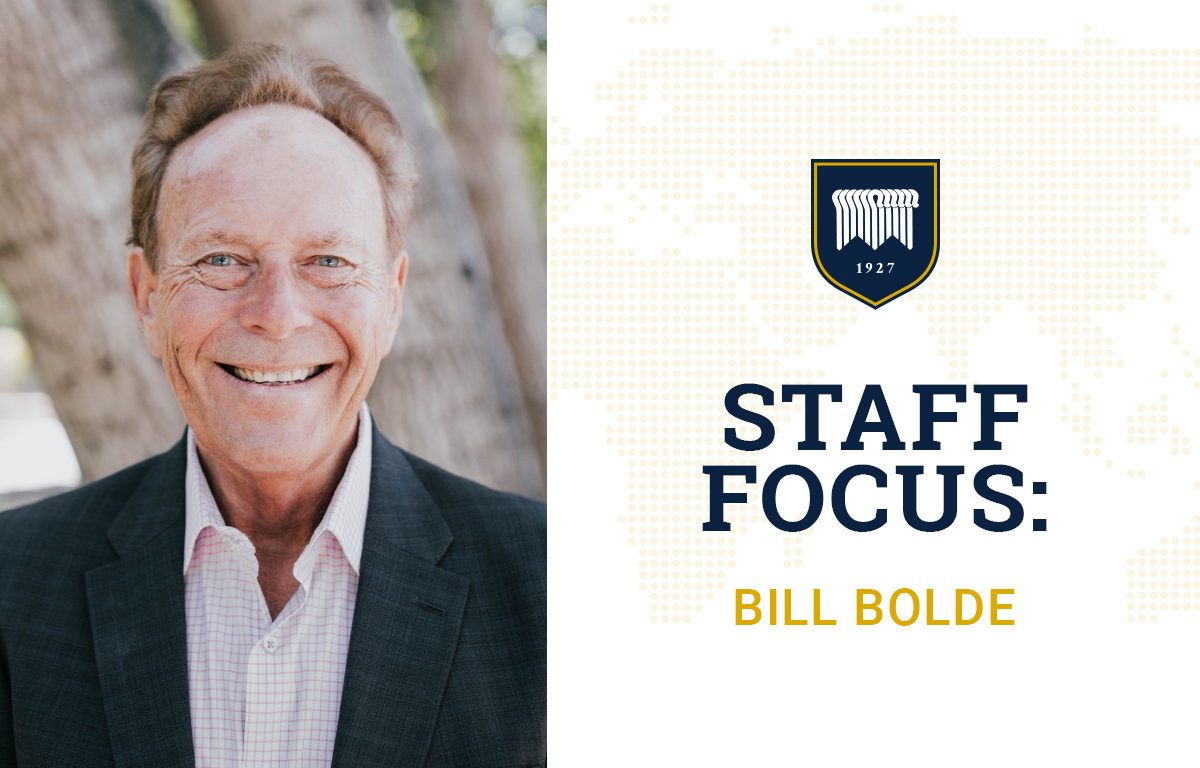 Bill Bolde may only be in his fourth year as The Master’s University’s executive director of Career Services and Advancement, but his history with working in education—as well as his history with TMU’s campus—stretches back more than 40 years.

Bolde was born, raised and educated in Southern California, in a family with varied views on faith. “My mom was Presbyterian. My dad was raised Catholic, and as far as I knew, my dad never went to a church service,” Bolde says.

“My mom would drop my brother and me off at Sunday school every Sunday, and we’d get our dose of spirituality for the week. My mom would sometimes go in to church, but sometimes she’d go back home after she dropped us off.”

Fortunately, Bolde and his brother had neighborhood friends who were also from a churchgoing family. Their friends’ dad would regularly play sports with the kids and then invite them to his church on Sundays. It was a Baptist church that regularly held big revival meetings, and it was there that Bolde first gave serious thought to his faith.

Later, when Bolde was about 20 years old, he was hired as the athletic equipment manager at Canyon High School in the Santa Clarita Valley. The opportunity began his career in a respected public school system and also introduced him to a faithful Christian named Harold Bolin, who was playing on the school’s football team.

“He carried his Bible everywhere, and he was bold enough to ask me if I knew Jesus Christ as my savior,” Bolde recalls. “I said, ‘I know of Jesus Christ, but maybe you need to explain more to me about what it means to have Him as my Savior.’ So, we spent a lot of time together talking about God’s Word and the plan for salvation, and then he introduced me to the pastor at Grace Baptist Church, whose name was Jim Renz.”

At the time, Grace Baptist still owned what is now TMU’s North Campus. Jim Renz’s office was on the second floor of what has become the school’s Music Center. “That office,” Bolde says, “is where Jim Renz and I prayed the prayer and I was saved by Christ through grace. It was December 8, 1975.”

It wasn’t long before Bolde also found his career path, beginning with a stint as an assistant baseball coach at Canyon High. He found that he enjoyed working with high school kids, helping them develop their skills and investing in their lives. “I started asking myself, ‘How can I do this for a living?’”

People who saw his passion for impacting the lives of young people encouraged Bolde to pursue teaching. So, he returned to school at CSUN in Northridge, Calif., where he had earned a bachelor’s degree in kinesiology. This time, he earned his teaching credential, and in the fall of 1985, he began substitute teaching at Saugus High School, not far from Canyon High.

That was only the beginning for Bolde. Over the next 30 years at Saugus High, he would teach driver education and health, serve as athletic director, and take on the position of assistant principal. He concluded his time at Saugus with 14 years as the school’s principal.

When Bolde was more than a decade into his time as principal, Dr. Kurt Hild, a Master’s professor, approached Bolde about becoming the chair of TMU’s Education Department. The timing wasn’t quite right for Bolde to make a change, but the prospect of working at Master’s stuck with him. He agreed to teach a pair of online business leadership classes in the meantime.

“It wasn’t much later that I started having conversations with Dr. (John) Stead. Dr. Stead and I both attended Grace Baptist Church, and every Sunday he would sit a few rows behind me,” Bolde says of the longtime Master’s faculty member. “We would have conversations and talk about what it might look like if I came to work at Master’s.”

Stead told Bolde about a unique opportunity that would bless TMU’s students. After decades of time spent in the public school system and networking in the community, Bolde knew seemingly everyone in the Santa Clarita Valley, from business owners to political leaders.

Over the course of these conversations with Stead, it became clear that Bolde was in the perfect position to help Master’s students through a renovated Career Services program. So, in 2017, Bolde retired at Saugus to come and do just that.

“It’s been such a blessing to be here at The Master’s University. I think the students here at Master’s are just fantastic,” he says. “You’re not going to find better individuals anywhere. You’re not going to find better representatives of Christ. I hear that over and over when I go out in the community. I’m on a number of boards in town, and when I go to those meetings, the people who serve with me say, ‘I want more students like those at Master’s to come work for me.’”

As Bolde has been developing Career Services, his office has moved to the corner room in the Biblical Studies Center on North Campus—one of the most central and visible spots at the school (and, incidentally, only yards away from the building where he was saved). This was a strategic decision, because one of Bolde’s goals is to meet and have conversations with as many students as possible.

Whether a student walks into his office to get advice on his or her resume, or just to chat about classes, Bolde wants to help. “I want to build that rapport with students,” he says. Yes, he has resources to help students plan their careers, but Bolde’s foundational goal every day is to encourage the people around him, regardless of what their specific challenge is.

“Every day, I thank God for the opportunity to get up, and I ask Him, ‘Who will you put in front of me today? Whose life do you want me to impact today? Is it a student? Is it someone who’s hurting, or grieving, or someone going through a deep challenge? How can I bring some sunshine into somebody’s life?”

Sometimes this looks like connecting a student to a local business that’s looking to hire. Sometimes it looks like organizing career fairs and workshops on campus. But foundationally, it looks like helping the people around him understand their gifts and how they can use them to be a source of good and an ambassador for Christ wherever they go.

“There’s a lot of darkness in this world, and we need the light of Christ to be lighting it up. That’s probably my biggest purpose in being here: to help students be that kind of associate for the Lord. We walk in the light, but we also walk in a dark world. We need to be the light, so that others can see what’s special about Christ,” Bolde says.

Students and alumni can connect with Bill Bolde directly at bbolde@masters.edu. Bolde also wants to encourage people to drop by his office and say hello.