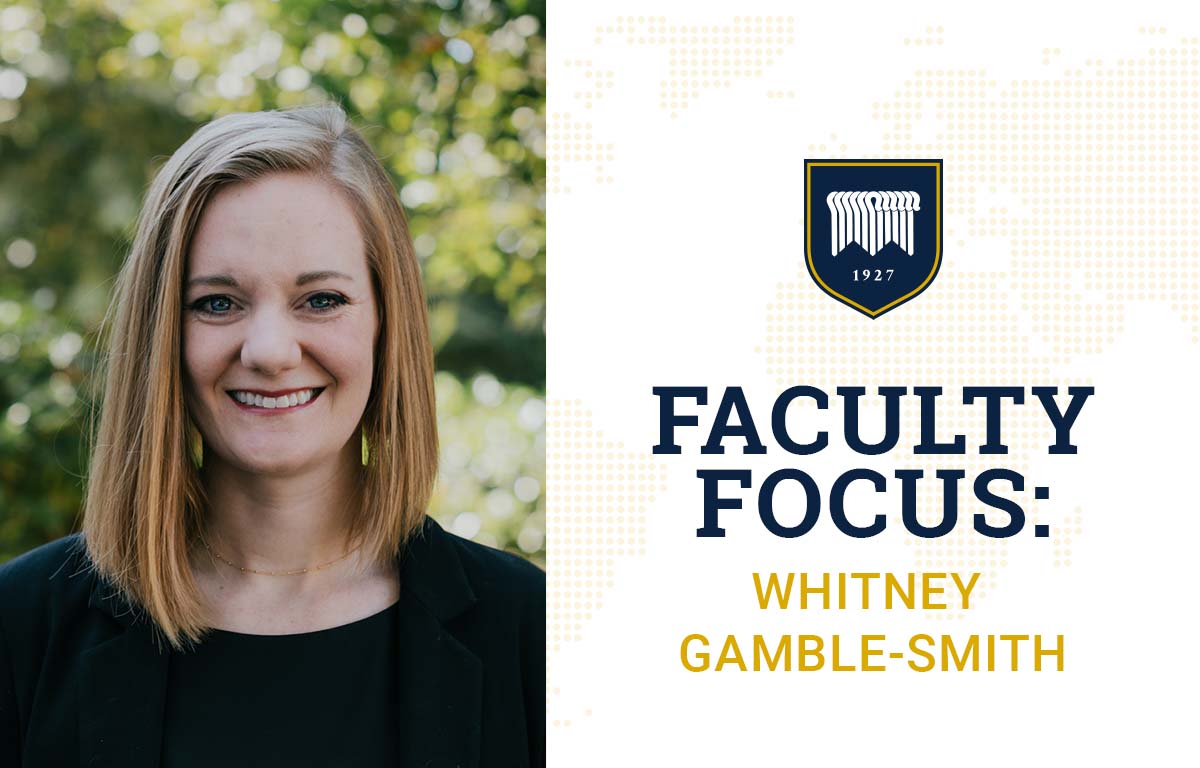 Dr. Whitney Gamble-Smith — the daughter of a theologian and a German scholar — picked up her first violin when she was 3. Her German lessons began soon thereafter. She moved onto Greek when she was 10. And when she was 12, her dad took her to the bookstore and let her choose whatever book she liked. She chose Calvin’s Institutes.

Gamble-Smith didn’t have the label at the time, but she grew up in a home that was thoroughly interdisciplinary, something that helped prepare her to be the director of one of The Master’s University’s newest majors, interdisciplinary studies.

Growing up, Gamble-Smith’s years as a home-schooler afforded her the time to pursue a wide variety of interests. When she was 12, she selected her career path — a professional cellist. She practiced for six to eight hours a day, and four years later, she was offered a spot in the prestigious Cleveland Institute of Music. She gratefully declined the offer for two main reasons: She would miss her church, and a dear family friend was having a baby — a child that young Gamble-Smith wanted to celebrate and befriend.

During those days, Gamble-Smith’s mind and time were pulled in many different directions. She loved her church, her family, her friends, her music, but most of all, she loved her Bible. She would light a small candle, turn on the music of celebrated cellists like Yo-Yo Ma and Jacqueline du Pre, and for hours read the Bible her parents bought her.

It was that passion for studying God’s Word that led Gamble-Smith to enroll as a biblical studies major at a small liberal arts college in her home state of Pennsylvania — Geneva College. There, she discovered the formative nature of undergraduate education.

“My professors were absolutely astounding,” she says. “They challenged me to think biblically about everything. I learned that not only am I a believer, not only do I have a personal relationship with Jesus, but Jesus has something to say about the whole world and everything in the world. And that just made me hungry to continue learning.”

After finishing her bachelor’s degree at Geneva College and her master’s at Reformed Presbyterian Theological Seminary in Pittsburgh, Gamble-Smith needed to make money. She began serving as an adjunct professor at 22, during which time she also started her own drywall business and played cello for weddings.

In the classroom, Gamble-Smith’s students enjoyed her teaching so much that the college’s administration encouraged her to pursue a doctorate. So, she applied to the University of Edinburgh and was offered a full-ride scholarship. During her time in Scotland, Gamble-Smith studied the British Civil War, the Puritans, and the Westminster Assembly. She was forced to think not just as a theologian, but as an historian. Then her studies brought her to Los Angeles.

“I came to L.A. to do research at the Huntington Library in Pasadena, because it turns out that the Huntington is pretty much the best library in the world for British theology,” Gamble-Smith says. “While I was here studying, there was an opening in theology at Providence Christian College — a liberal arts school in Pasadena. I applied, not thinking that I would get the position. But I did. And that’s what kept me in L.A. I taught at Providence for five years before transitioning to The Master’s Seminary, and now to TMU.”

Gamble-Smith has spent the past several years in higher education administration, but her love for helping undergraduate students see the beauty of God’s Word has not waned.

“I was so affected by the professors I had in undergrad that I think it’s amazing to get the chance to do that also as a teacher,” she says.

Gamble-Smith now has that chance as the director of TMU’s interdisciplinary studies program.

“What it’s about, basically, is taking our theology — the knowledge that Christ is Lord over all and is in all things — and applying that theology to a major we haven’t had before,” she says. “The goal of the major is to show how everything in the world fits together.”

Students in TMU’s interdisciplinary studies major choose two different disciplines on campus — for example, music and business — and take a core set of classes from each discipline. For the remainder of the program, students will choose electives from their two disciplines according to their interests, and then integrate the two through an internship and capstone project.

“It’s in that third section, really, that students will be challenged to think interdisciplinarily — if that’s a word I can coin,” Gamble-Smith says. “They’ll begin to think creatively, with a critical mindset, and figure out what it is that Christ has to say about both subjects they’ve chosen.”

The major is designed to mold into each student’s interests, and capstone projects and internships will look different depending on the disciplines involved. But regardless of which path a student chooses, the path will be trod with boldness, because Christ upholds that path.

Incidentally, the skills and experiences inherent to interdisciplinary studies are also in high demand in the workplace.

“Employers are looking for students who can do many different things,” Gamble-Smith says. “They don’t just want specialists; they want people who are specialists in multiple areas and have experience doing multiple different things. We think it’s not only a good idea theologically, but a good idea practically too, for employment purposes. This program produces a student who is well-trained in multiple areas, and most importantly can think critically. The whole world comes under Christ’s lordship, and our goal is to create a major that mirrors that reality.”