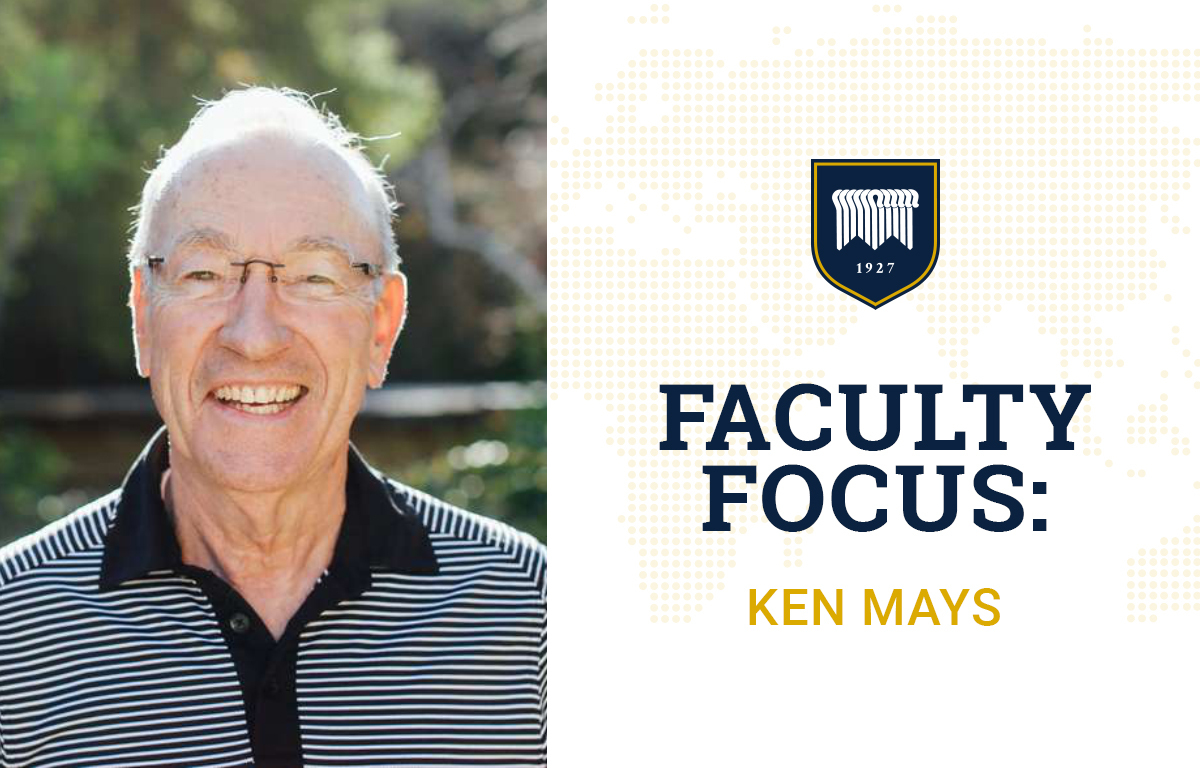 Many years ago, a little girl grew up in rural Indiana as one of seven children in an abusive home. When she was in elementary school, her chorus teacher made her sit quietly in a corner because she didn’t know how to carry a tune. When she grew up, married, and had seven children of her own, she purposed that every single one of them would take music lessons.

One of those children was Dr. Ken Mays, a man who has spent his entire life making and teaching music. For the past 34 years, he has taught music theory and piano at The Master’s University, and beginning this fall he will transition into the role of professor emeritus.

Mays’ passion for the piano began in fits and starts.

He learned the instrument when he was six years old. When he was 11, his church’s pianist married and left town, and he was chosen as the replacement. This began a lifetime of serving musically in churches — even if he was ambivalent about music in the beginning.

“I quit three times when I was a kid,” says Mays, laughing. “And I didn’t practice as much as I should have.”

But he kept coming back to it. “The last time, I quit for a short period. Then I said to my mom, ‘I want to take piano lessons again.’ And she said, ‘Nope, sorry. Not unless you promise never to quit.’

“I promised. And I never quit. I’m still learning.”

As he got older and eventually became a music student at a Bible college in Fort Wayne, Ind., his goal for the future was to become a high school band director. But during his freshman year, the music faculty told him he should focus on the piano.

“We think your talents are in piano,” Mays recalls hearing. “We would suggest that you don’t go on training to be a high school band director, but that you prepare to be a piano teacher.”
Mays objected, “But everybody plays the piano.”

In hindsight, Mays couldn’t be more grateful for the redirection. “Lord bless those people who teach junior high and high school kids, but it’s not for me,” he says. “By the time students are college-age, most of them know why they’re here. They’re much more focused. College has been the right thing for me.”

“I probably would have stayed at Wheaton forever. I enjoyed it there,” he says. But the Lord used a pair of circumstances to uproot him.

“You’ve got to get this lady into a warm climate,” a surgeon told Mays. If her ailment couldn’t be fixed surgically, they could at least move to a place that didn’t exacerbate her symptoms.

Around the same time, the couple’s finances took a major hit. A friend, whom they had trusted to manage their holdings, invested heavily on their behalf in the commodities market without permission. “Lost every cent we had,” Mays says. No longer able to afford their mortgage, they lost their home.

“It was obvious we needed to move,” Mays says. “So we began sending resumes to different colleges.” Nita also called two schools to ask about job openings. One happened to be Los Angeles Baptist College in Newhall, Calif.

No opening existed at the time, but the school, which would eventually change its name to The Master’s College and then The Master’s University, said it would keep Mays’ resume on file.

Some months later, Dr. John Stead (then the academic dean of the school) called Mays. The music department was very small at the time, and Stead was looking for someone with Mays’ credentials to help build it.

Mays was uncertain. But when he got off the phone, his wife said, “That’s where we’re going.” The next year, in 1986, that’s what they did.

“Through the loss of health and loss of finances, the Lord opened us up (to the move),” Mays says. “So I thank the Lord for both of those situations, for bringing us to where He wanted us to be.”

Mays fondly compares those early years at Master’s to mission work. At the time, there was only one grand piano on the entire campus. The music department was located in what is now TMU’s development office, with very thin walls separating one practice room from another. Mays trained his students on an upright piano, with the sound of practicing vocalists on one side and the sound of through traffic on the other (at the time, there was no gate on Placerita Canyon Road, so it was an extremely busy street).

Of course, Mays doesn’t regret a moment of it. “This place has been such a blessing to me. The students really love the Lord. And the department grew and grew until there were several faculty members with doctorates, as well as more and more students—and students with stronger musical backgrounds.” The Music Center that now stands on North Campus is a testament to how much the program has advanced since Mays first came.

As much as Mays loves writing and performing music, he finds a special joy in teaching. “When you’re sharing your own love, it is great to see it connect with a student, and to see the way they play after a semester or a year and be able to say, ‘Wow—they’re a different student, musically.’ And I thank the Lord for allowing me to help them in that and to see their success.”

Rarely does he feel this sentiment more keenly than when he’s listening to his students perform in recitals. “When I’m sitting there in the audience and listening to a junior or senior recital, I’m playing every note with them, rejoicing in how well they’re doing and rejoicing in their success—and really enjoying that more than if I were the one playing the music.

“It’s hard to explain, but it just makes me come alive and think, ‘Lord, thank you that I’m still able to impart something, and hopefully inspire these students so that they play at a higher level than when they began.’”

For Nita, continued health issues meant she could never return to teaching (something that had been a longtime passion), so she instead committed herself to a life of prayer over her husband and his students. She knew the names of students in his classes and when their lessons were. And she faithfully interceded for them. Mays’ pupils knew this, and they openly shared prayer requests. In turn, Mays shared with them about his wife’s pain and the couple’s ongoing need to trust the Lord.

This ministry continued all the way until the Lord took Nita home, more than seven years ago.

“We poured our lives into training Christian young people to serve the Lord,” Mays says.

As much as Mays values excellent music, the legacy he hopes he has left is a legacy of faith. Whether it’s with his students or with his children and grandchildren, he has endeavored first and foremost to pass down his own love for Christ. Without that, he says, even the highest musical achievements are worthless.

In the early days, Mays worked as a full-time faculty member teaching music theory and piano. In 2004 he transitioned to part-time work, handing off music theory but keeping his piano students.

Starting this semester, Mays will wear the title of professor emeritus. He will continue as part of TMU’s campus community, but he will be freed from his faculty responsibilities to spend more time pursuing his other passion in life: writing hymn arrangements.

“I’ve been hearing hymns all my life, and what I love about them is that so many of them are scripturally oriented, and there’s a sense of developed theology from stanza one to stanza four,” he says.

He also cherishes the stories behind many of his favorite hymns. “It Is Well with My Soul” was written by Horatio Spafford while grief-stricken over the sudden loss of his four daughters. “’Tis So Sweet to Trust in Jesus” was written by Louisa Stead after her husband died, leaving her and her young daughter destitute.

“I just love it that so many of these hymns come from the hard experiences of godly people,” Mays says.

Mays has written many hymn arrangements over the years for his students to use, working for 10 or more hours on each one as he tailors his students’ favorite tunes to their chosen instruments. He believes that continuing to bless these young men and women and alumni in this way will be plenty to keep him busy.

Though his position at TMU will be changing, Mays’ love for the school remains the same.

“As I’m with alumni, present students, and colleagues, I marvel at what a wonderful family this is. It’s like we’re already having fellowship that resembles what we’re going to have in heaven. This is my family, here, closer than some of my own genetic family—the ones who don’t know Christ—because you can’t talk about the same stuff with the freedom that we can here.

“I want to encourage us all to continue to look to the Lord and to pray for students who are serious about wanting to serve the Lord and grow in Him—and that we won’t only have those students, but that we’ll continue to have faculty who trust the Lord.”

Mays has been an example of that trust for more than 30 years at TMU. And he continues to inspire his students and colleagues to embody that same faith.