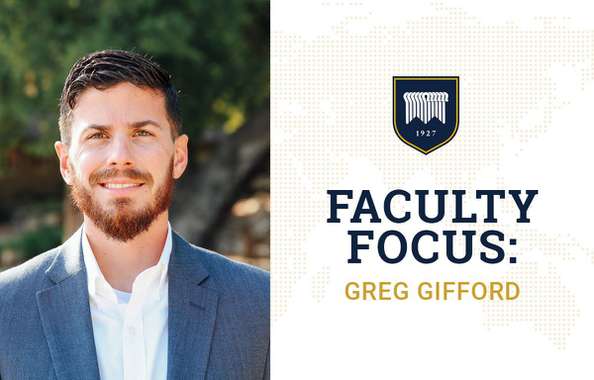 Dr. Greg Gifford couldn’t help but feel a pang of wistful desire as he watched his college friends pack up and spread across the country to go into various ministries.

Ministry had been Gifford’s focus for years. But after graduating from Baptist Bible College in Springfield, Mo., in 2008 with a degree in Bible and pastoral ministry, Gifford was preparing for something far different: basic training at Fort Jackson in Columbia, S.C.

Basic training for the United States Army meant saying goodbye to Amber, his high school sweetheart and wife of three years, and welcoming a question that would haunt him: “Did I make the right decision?”

Six weeks later, in the midst of humidity and grueling days, his platoon was guaranteed a breath of fresh air: one phone call, the promise to hear Amber’s voice for the first time in over a month rather than read her government-delayed love letters.

But on the day this call was supposed to take place, the privilege was rescinded due to the misconduct of someone in his platoon. Again, he was faced with the question: “Did I make the right decision?”

Between basic training (where he was made platoon lead), officer training (where he finished 20 out of 160 in his class) and two additional training camps in his chosen specialty (communications as a signal officer), his time away from Amber accumulated to a year of on-and-off separation. He jumped back and forth between forts in Georgia and South Carolina and then was given his assignment: one year in Kuwait. One full year away from Amber.

Did I make the right decision?

Now, as Gifford sits at his new desk in the School of Biblical Studies at TMU, that question was posed to him again, but from an outside source: “So, did you make the right decision?”

“I would do it again. I would make that choice again,” Gifford says with no hesitation and a smile on his face. “I have two boys, and I am encouraging them to consider military service.”

For Gifford, there were strategic moments in his life that helped answer that pervasive question.

Months later, the Giffords began their two-year deployment in South Korea. “For South Korea, it is all about a strategic presence in the Pacific,” Gifford says. “It was very Cold War-esque. We were shot at, guard shack to guard shack, but I was never in the direct line of combat.”

As a captain, Gifford was in charge of six people, including two foreign nationals. As a signal officer, he was responsible for fixing all the technology on the base by the border of North Korea. “I’m totally immersed in a foreign country, environment, with predominantly unbelievers and now I’m expected to be the subject-matter expert on all things technological,” Gifford says. “I didn’t grow up speaking code. I wasn’t in geek squad, so all the technical stuff was very new to me. I was overwhelmed.”

During his time in South Korea, he knew he still wanted to pursue ministry, and the question loomed again: “Did I make the right choice?”

At Camp Bonifas, there was no church, no chaplain, no Bible study. So, he started a study on his own in an old church located on the base. The three or four guys who came “were professing believers and knew they should be doing the right thing and needed accountability in a foreign country,” Gifford says. Because of that, Gifford became the chaplain assistant, “the point guy” on all things religious.

As his deployment in South Korea neared its end, he faced one of those pivotal moments. “So the decision was basically quit a job where I was moving up the ranks and there were no issues – I’d continue to travel, I had a secure income with benefits – or pursue what God was calling me to do, which was ministry,” he says.
To continue his career in the military, Gifford would have to go through a six-to-nine-month deployment, one that Amber could not join. And, after his year of training and two years of service in South Korea, “I had really accomplished what I set out to do, to make a clean break and not have any obligations (to student loans).” Armed with clarity, he moved to inactive service, a three-year commitment until his military obligation was fulfilled. Now the question was, “Where do I go from here?”

In the mess hall, Gifford told his commander of plans to plant a church in Hawaii that had not yet come to fruition. His commander, a Christian, said, “Greg, Hawaii will always be there. What you need to do is go back to school.”

“I wanted to be trained on how to use my Bible effectively to minister to people, and I was reading the book ‘Counseling: How to Counsel Biblically,’ published by Dr. MacArthur and The Master’s University faculty, and that’s where Master’s came into the picture,” Gifford says.

“It came down to Westminster in Philadelphia, Southern Seminary in Louisville, and Master’s. But Master’s tipped the scale for me because I knew they are the leaders of the (biblical counseling) movement.”

Gifford graduated in 2013 from TMU with a Master of Arts in biblical counseling and moved back to the south to work at a church and a counseling center in South Carolina. While he was there, “I thought it would be wise to (continue to) use my G.I. Bill before it expired on me. My boss agreed to give me the time to study and pursue classes, and I began to pursue my Ph.D. out there.”

Then Dr. John Street, chair of TMU’s biblical counseling department, gave him a call: “How do you feel about teaching a few classes at Master’s and finishing your Ph.D. out here?” Another strategic moment.

“We realized his tremendous potential not only to be effective in counseling but to also direct our program,” Street says.

In 2016, Gifford moved his family back to California to be the director of graduate studies at The Master’s University and to finish his doctorate.

Now, he’s an assistant professor of biblical counseling. “I didn’t come out here for a professorship position. I just didn’t want to waste my G.I. Bill. I had no idea that pursuing a Ph.D. was going to be important later,” Gifford says. “Now it’s a crucial part of me being able to pursue this job, something that was so whimsical and random.”

At the time he made each of these major decisions, Gifford had no idea how God was going to use them. “I can see decisive points: when my commander said ‘Hawaii will always be there,’ when I chose to get out of the military, when I crossed the country with my family to come to Master’s, when I chose to pursue a Ph.D.”

So, did he make the right decision?

“The military taught me things I think I only could have learned in that experience,” Gifford says. “There is something to living in a foreign culture, paying a ticket in a foreign culture, and making sure you are walking uprightly when no one cares how you walk. Those are things that really solidify your faith. It also was a joy to get to cast my lot with those who say we actually contributed through service of our country.”

It also taught him about habits – the topic of the dissertation he defended to earn his Ph.D. in biblical counseling from Southwestern Baptist Theological Seminary in Fort Worth, TX.

When asked about the topic of his dissertation, he responded, “Ready to go to sleep?” But he followed with, “What I am suggesting is that the Puritans viewed habits as not only something you do because you love Jesus, but something that you do that helps you love Jesus more.”

“Prof. Gifford has achieved wisdom beyond his age in the discipline of biblical counseling,” Street says. “He not only is an effective teacher, but has excellent experience in dealing with difficult mental, emotional, spiritual problems that many encounter. He is ready to have a very effective teaching experience with undergraduate students. There are many profs who possess the theoretical knowledge to teach on a collegiate academic level but lack the actual, real-life experience of counseling practice. Prof. Gifford has the wonderful blend of both. This will serve him well in the classroom.”

Greg Gifford lives in Santa Clarita, Calif. with his wife Amber and two sons Zane and Finn. Among varying publications, Greg is the author of “Helping Your Family through PTSD” and “Heart & Habits (2021).” He teaches in TMU’s School of Biblical Studies and earned his PhD in Biblical Counseling from Southwestern Theological Seminary in Fort Worth, TX.