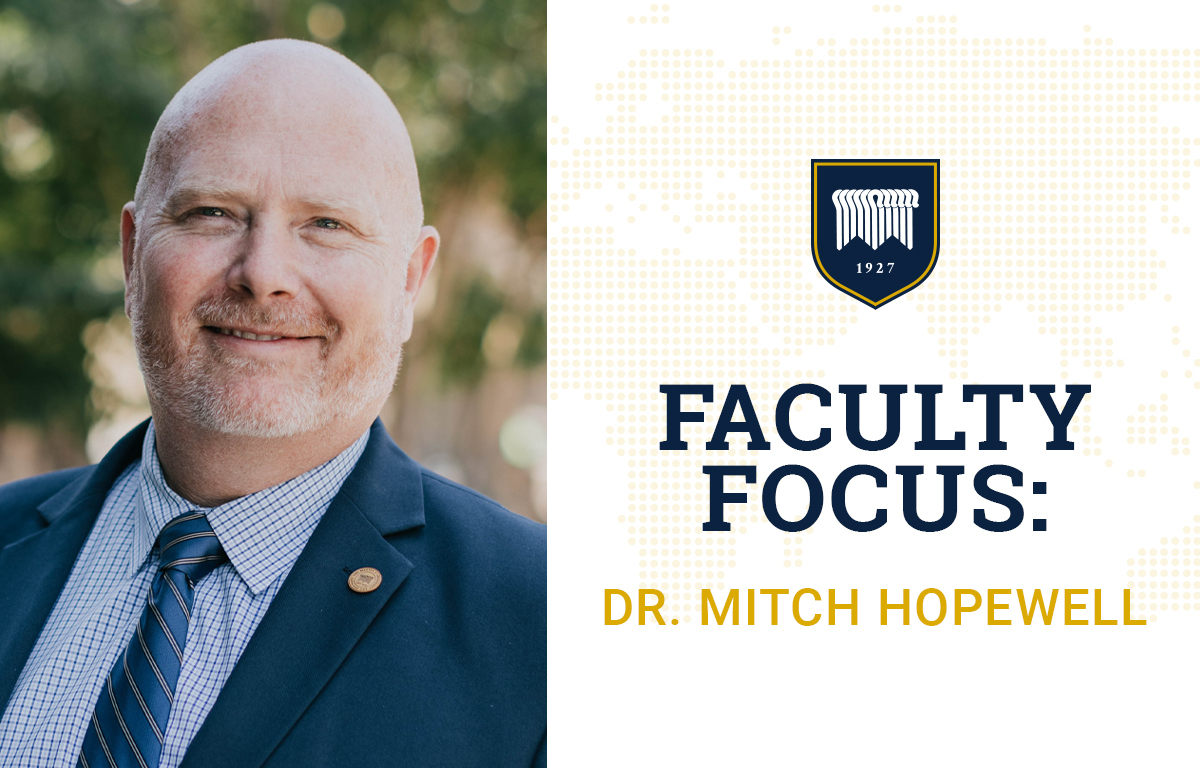 Dr. Mitch Hopewell had no plans of pursuing a career in higher education when he first arrived at The Master’s College as a student in 1995. He enrolled as a Bible major, with tentative hopes of one day going into full-time youth ministry. But like many freshmen, Hopewell really wasn’t sure what path he should take. A conversation with Ken Ramey, one of his professors, proved pivotal.

“He helped me understand that going into full-time ministry is not the only way to minister to people,” Hopewell says.

Hopewell has proven that statement to be true over the course of an impressive career in higher education that has taken him from Colorado to South Dakota and back to sunny Southern California. He returned to TMU as the dean of Online Learning in 2017, and he added the role of provost two years later. He currently serves alongside his wife, Angela, in the college group at his local church.

Through it all, his mindset has remained the same.
“The thing that gets me up in the morning — what I love to do — is serve people and help them accomplish the things they want to do,” he says.

The opportunity to do that in an academic environment centered on glorifying Christ is what brought Hopewell back to Master’s after successful runs at a pair of state universities.

“At TMU, we’re creating these agents who can go out into the world, be excellent for the Lord in their secular workplace, serve their churches, serve their families and be a light in their communities,” Hopewell says. “It’s the greatest thing I could do with my time.”

Hopewell may never have reached that conclusion had it not been for a timely conversation with Ramey, a Bible professor at Master’s at the time.

“He said, ‘If you can see yourself doing other things, or if you have other motivations in your life, that doesn’t mean you can’t minister to youth or to people in the church,”’ Hopewell recalls. “‘The church can’t be run only by full-time people — it’s not intended to.’” Hopewell — who now serves in the college group at Placerita Bible Church in Santa Clarita — says the discussion opened his eyes to possibilities outside vocational ministry. He possessed an interest in teaching, so he changed his major to history and started pursuing a career in primary and secondary education.

While at Master’s, another important development took place. Hopewell met and married his wife, Angela. They now have two children: Alyssa (18) and Isaac (16). And Alyssa has since followed in her parents’ footsteps and enrolled at TMU where she’s a freshman studying kinesiology and physical education and playing on the women’s soccer team.

Master’s was only the beginning of Dr. Hopewell’s education.

After graduation, Hopewell’s father-in-law, who worked at Northern Arizona University, reached out with an idea. “He said, ‘Hey, you like technology and teaching, and you’re good at school. Want to check out this new master’s program in educational technology?’”

The program was an early example of a mostly online degree, and Hopewell’s decision to pursue it exposed him to the unique context of online upper education. After earning his master’s degree, he decided to continue his studies, eventually earning a doctorate in curriculum and instruction at Northern Arizona.

It was also during this time that Hopewell received his first taste of teaching college students. From that point on, he knew that higher education was where he was meant to be.

Once he finished his doctorate, Hopewell was hired by the Colorado State University system to help build CSU Global, the first online state university of its kind in the country. “We had to forge the way and figure things out,” he says. “Those were the early years of online education.”

Hopewell then moved again, this time from Colorado to South Dakota. There, he spent nine years at Black Hills State University as chair of the Master of Science in Strategic Leadership program before receiving a call that opened the door for his return to TMU. In 2017, Master’s asked if Hopewell would be interested in spearheading the school’s online program. Hopewell signed on.

As Hopewell sees it, online education has an important place in TMU’s mission. “The Master’s University has been built on a discipleship, life-on-life model. And that’s exactly the right thing for us to do. That’s who we are, and that’s what we do for 18-to-22 year olds,” he says. “But the online degrees are aimed at a different population. Their aim is to take the education we provide — from a biblical worldview, grounded in Scripture — and provide it to a population of people who either didn’t or couldn’t go to college when they were college-age.”

In his role as provost, Hopewell is also positioned to serve TMU’s faculty, who, in turn, serve the entire student body. “It’s been a real pleasure for me,” he says of a job that has brought him full circle. Hopewell has gone from studying under longtime professors like Dr. Gregg Frazer, Dr. Kurt Hild and Dr. Greg Behle, to helping guide and support the various academic programs of which they are a part.

“As a TMU alumnus, he understands firsthand the eternal value of an education at The Master’s University,” Horn says. “And with a wealth of experience in higher education, he plays an invaluable role for our institution as our provost and chief academic officer. His background has equipped him to lead our faculty and ensure that our programs compel students to academic success, professional excellence and, most importantly, an uncompromising commitment to Christ and Scripture.”

Hopewell also continues to find ways to serve TMU students directly, most notably through his Legacy Leadership program. His goal is to select a group of freshmen and encourage them to begin thinking about leadership principles so they can have a rolling start into wherever the Lord has gifted them to serve.

In other words, Hopewell wants to provide godly guidance to young people at a pivotal time in their lives – a task that sounds a lot like youth ministry.

To learn more about the undergraduate and graduate degree programs offered by TMU Online, [click here](https://www.masters.edu/online/).