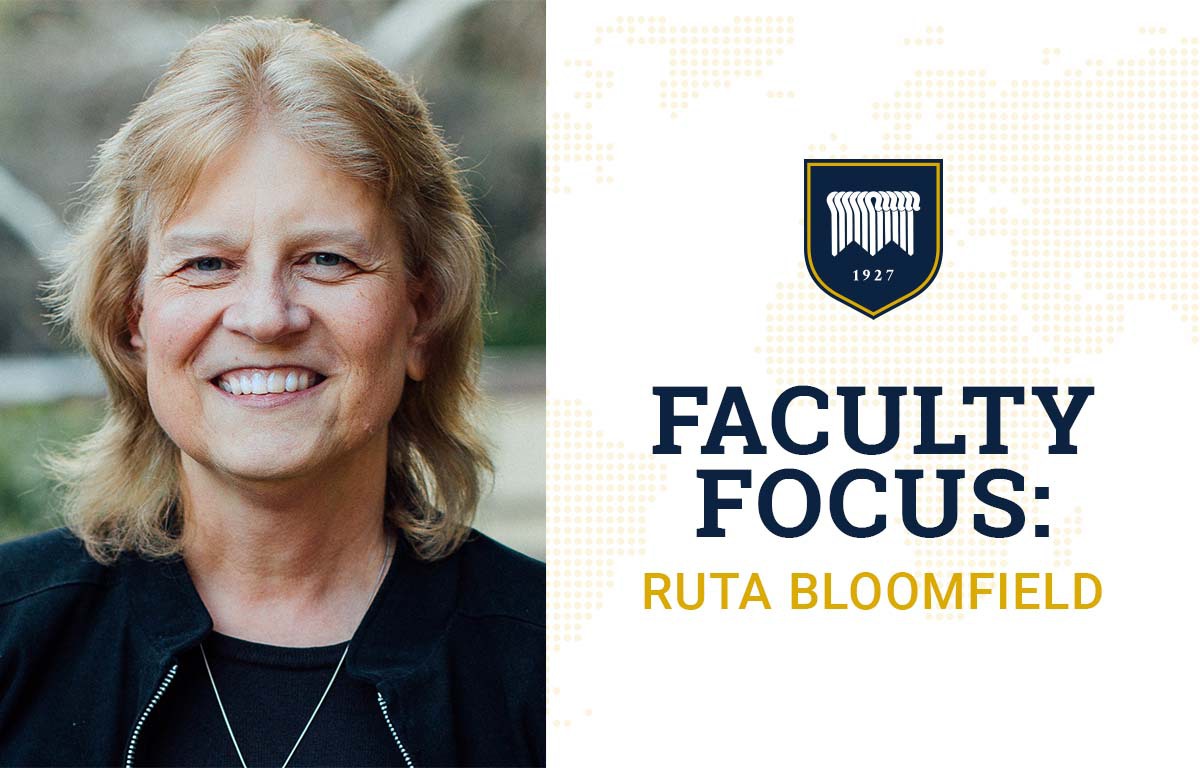 As a college freshman, Dr. Ruta Bloomfield barely knew what a harpsichord was.

But only two years later, Bloomfield was living in a castle in Salzburg, Austria, as an exchange student, majoring in harpsichord performance and falling even deeper in love with the keyboard instrument that would remain a major part of her life for years to come.

To this day, Bloomfield has never been one to pursue her passions with half measures. Whether it’s the harpsichord, baseball or teaching, she has spent her life trying to experience as much of what she loves as she can. And this zeal has been the very thing that makes her classes — especially her famous Essentials of Music & Art course — so impactful for students at The Master’s University.

“Dr. Bloomfield is the most passionate person. So passionate! She just cannot contain it,” says Sheridan Louie, a 2019 TMU grad. “She’ll come into class wearing office clothes matched with running shoes. Then she’ll get excited about some musical cue and jump up on the desk and be like, ‘Do you hear this!?’”

Bloomfield grew up in the greater Detroit area as one of four sisters. In high school, she was introduced to the God of the Bible, and soon after, she placed her trust in Christ.

Around that time, another shift also took place. After being forced to take piano lessons for seven years (and hating it), Bloomfield finally started to enjoy playing. In fact, she loved it so much that she decided to major in music at Bowling Green State University in Ohio.

Her first year, on a whim, she started taking lessons on the harpsichord — a keyboard instrument invented centuries before the piano. “I didn’t even know what a harpsichord was before Bowling Green,” says Bloomfield, who was intrigued by the instrument’s unique sound. “I wasn’t intending for the harpsichord to become my life’s passion.”

Bloomfield has been teaching Essentials of Music & Art at TMU since 1989.

Eventually, Bloomfield decided to double-major in music history & literature and harpsichord performance. And then she spent a year studying in Salzburg, a city famous for its classical music festivals and for being the birthplace of Mozart.

While there, she lived in the Schloss Frohnburg Castle, which appears in “The Sound of Music” as the first establishing shot of the von Trapp home. There was a harpsichord near her room, and Bloomfield relished pulling on slippers and walking over to practice whenever she wanted.

Ever since, the harpsichord has been the focal point of Bloomfield’s musical career. She is involved with numerous music societies related to the instrument and is the vice president of the Historical Keyboard Society of North America. She has learned and performed famously difficult harpsichord pieces, including the instrument’s Mount Everest: the 75,730-note Goldberg Variations by Bach.

After finishing her bachelor’s degree, Bloomfield earned her master’s in musicology and harpsichord from Northwestern University. And years later, she earned a Doctor of Musical Arts in historical performance practices from Claremont Graduate University while teaching full-time at TMU.

But before she had ever taught a college class, Bloomfield decided to go professional with another of her life’s passions: baseball.

America’s pastime — and particularly her lifelong team, the Detroit Tigers — has been a huge part of Bloomfield’s life since childhood. “And yes, they’ve been really lousy lately,” she admits. “But I’m loyal!” After her master’s program, she decided to try working for a baseball team.

So, Bloomfield flew to Florida when she knew major and minor league teams would be in town for business meetings. After standing in a hotel lobby for four days introducing herself to people, she talked her way into being the assistant general manager of the Waterloo Indians minor league team in Iowa. The job involved tasks like selling advertising space and managing the souvenir shop.

During the 1982 season, Bloomfield happened to meet a man named Ken at a Christian singles group. One day he asked her to play catch. By September, they were engaged, and they got married in May of 1983.

Ultimately, Bloomfield decided not to return for another season, instead turning her attention to teaching an introductory music course in Muscatine, Iowa. She so loved the experience that when the Bloomfields moved to Palmdale, California, to escape Iowa winters, she reached out to a number of schools. One of these was The Master’s College.

Bloomfield appeared on the cover of September’s issue of The Mustang Connection, TMU’s official magazine.

“Ten days before the fall semester started, I got a call from Dr. (Ken) Mays,” Bloomfield says. “And he told me that their Essentials of Music & Art professor was leaving, and they needed someone to teach the class. So I came down for an interview, and the rest is history.”

That was 1989, and Bloomfield has been teaching Essentials of Music & Art, a general education course, ever since. Over time, she’s added classes in aural skills and music history to her repertoire. But most students still know her best for the sheer enthusiasm she brings to her Essentials class.

“I just love the topic,” Bloomfield says. “I think that comes through, and I think it rubs off on students.”

“I don’t naturally like art and classical music, and I think Dr. Bloomfield is aware that that’s how most students are,” Louie says. So instead of making the class all about memorizing dates and terms, Bloomfield instead focuses on observation, showing photos of art or playing pieces of music and pointing out important details. And because she enjoys what she teaches so much, Bloomfield tends to get excited.

Bloomfield’s passion also means that she hasn’t stopped seeking out new experiences of her own. Decades after her time in Salzburg, she was granted a sabbatical semester during spring 2017. She used that time to take another trip to Europe — a 66-day tour where she performed four harpsichord concerts. One performance was in Paris, and another in Vilnius, the capital of Lithuania. In London, she performed in a house where Handel once lived.

She also performed in Leipzig, Germany, the city where her musical hero and favorite composer, Bach, spent the final 27 years of his life.

“He’s my hero of connecting music with faith, because he did everything to the glory of God,” Bloomfield says. “Whether he was writing church music or the Goldberg Variations, it was always to the glory of God. And that’s what I try to do. Whether I’m teaching or practicing, or whatever I’m doing, I have that same goal.”

*To learn more about music at TMU, visit the School of Music’s [homepage](https://www.masters.edu/schools/school-of-music).*