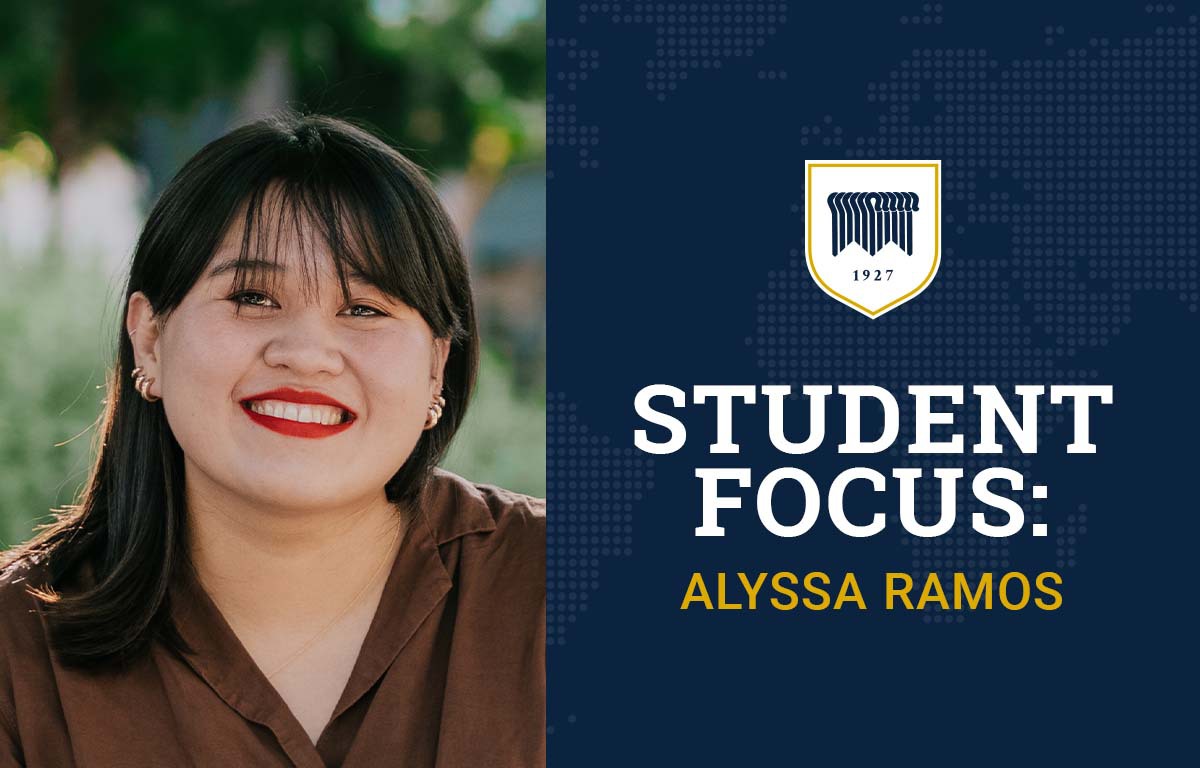 *Editor’s Note: This story originally appeared in [the October edition of The Mustang Connection magazine](https://e.issuu.com/embed.html?d=themustangconnection_oct21_issuu&u=themastersuniversity).*

Let’s start with this: Alyssa Ramos doesn’t regret walking away from a promising career as a professional chef.

But no, Ramos doesn’t believe she made a mistake in leaving a job at one of the best restaurants in her home country, the Philippines, so that she could enroll as a biblical counseling student at The Master’s University.

Since arriving at Master’s, she’s grown in her love for the local church. She’s seen what it looks like to enjoy vibrant personal study of God’s Word. And she’s developed an interest in the classical liberal arts, going so far as to add the program as a second major.

As for why she switched gears in such a significant way, it came down to motivation. Ramos feels, for her, becoming a successful chef was mostly about making a name for herself. Her desire to be a counselor, as far she can tell, was centered on a desire to help people meet life’s problems with biblical truth.

Ramos’ first foray into baking took place in the third grade. She was 8.

Unable to find an Easy-Bake Oven in the Philippines, she settled for a small toaster oven. She did her best to follow the directions on the back of a brownie box. “That was my Pandora’s box into the world of food,” she says.

Years later, she enrolled in a culinary arts program that offered classical training in French cuisine. Her studies included a “surreal” five-month internship at a restaurant on the second floor of the Eiffel Tower.

After graduation, she took a job at one of the Philippines’ top restaurants. And still in her early 20s, she rose to a leadership role within the pastry department.

However, what should have been the euphoric culmination of a lifelong dream was instead three challenging years. Ramos often worked from 10 a.m. to 1 a.m. She sacrificed relationships, and she began to crack under the pressure of the restaurant’s growing international reputation. Anxious, depressed and insecure, she began to lash out at coworkers.

“You know Gordon Ramsay?” Ramos asks, referencing the celebrity chef and his work on the TV show Hell’s Kitchen. “I kind of turned like that.”

Ramos was aware that her behavior in the kitchen – and the lifestyle she adopted outside of work to cope with depression – did not square with her faith in Christ. And over time, she began to repent and seek help from family and people from church. It was around that time that she was reminded of a Christian university in the U.S. that she’d briefly been interested in years earlier (she says she grew up knowing about the school’s chancellor, John MacArthur). Now, she thought maybe that place – The Master’s University – was where she needed to be.

That’s when she reached a crossroads. Would she continue to pursue the career she’d always wanted? Or would she embrace a new path she believed God was calling her to?

Ramos’ prospects in the arena of culinary arts remained promising. But she felt unable to detach herself from the selfish ambition that had warped her character. On the other hand, she wanted to study biblical counseling so that she could help people suffering under the weight of depression with nowhere to turn for help.

Since coming to Master’s in spring 2020, Ramos has seen God work in her life in foundational ways.

He’s used counseling homework and general education classes in biblical studies to further convince Ramos of the gravity of her sin (and to show her that He alone can change her heart). Ramos has also found encouragement in new friendships. “Hearing the testimonies of my friends and how God worked in their lives has impacted me a lot,” she says. “It helped me to shift my focus from myself to Christ.” Ramos says it’s strange, but also encouraging, to just now, at 24, be figuring out what it looks like to personally seek God in His Word every day.

Another area of growth has been Ramos’ love for the local church. At first, TMU’s church-attendance policy felt excessive. But Ramos found that God gradually transformed obligation into a genuine desire to serve and connect.

“I’ve learned that, as a believer, it’s really vital for us not just to attend but to actually be part of the ministry,” she says.

Ramos is a member at Oak Hill Bible Church, one of many strong, Bible-teaching churches in the area that give TMU students opportunities to serve and be discipled. For Ramos, that’s meant building relationships with godly, older women and serving in children’s ministry.

Maybe the most surprising development during Ramos’ time at TMU, however, came when she was introduced to the classical liberal arts program. Right away, she was intrigued by the opportunity to study literature in the major’s dynamic, discussion-based learning environment. She also heard about the brilliance of CLA director, Dr. Grant Horner. “When I get out of Dr. Horner’s classes, it makes me realize how little I know,” Ramos says now. “But it’s good because it means there’s room for growth.”

Horner has seen plenty of hard-earned growth in Ramos. Often when he arrives at TMU’s on-campus coffee shop at 7 a.m., Horner finds Ramos already there digging into a pile of books. “She’s gone from being tentative, like, ‘Oh, I don’t know if I can do this,’ to one of my best students because she just keeps knocking away at stuff,” he says.

Ramos has so fallen in love with the program that she hopes to one day teach in a classical liberal arts setting, maybe even opening a school in the Philippines.

She’s also open to providing biblical counseling to people back home, even if just in an informal setting. However, she knows God can change her plans. He’s done so before.