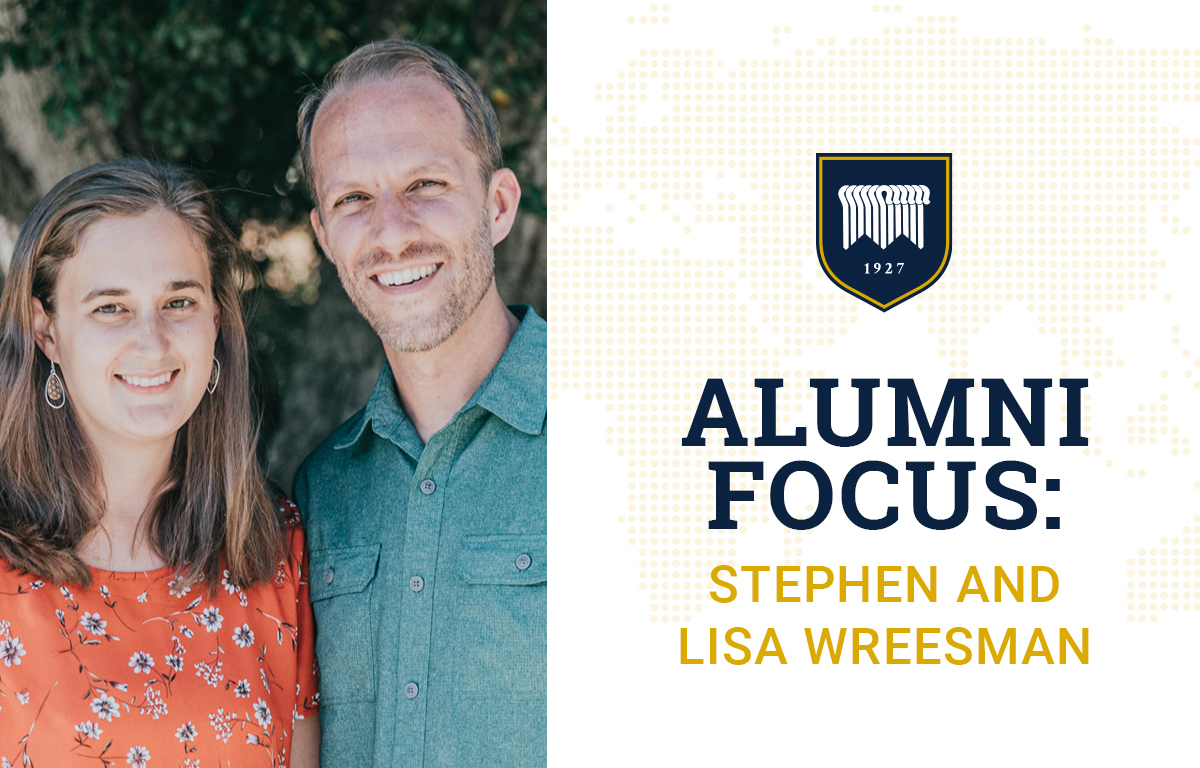 “Have you found Tigger yet?”

Lisa Palmer had been getting that question a lot over the course of several days — even from students she didn’t know. “Fall Thing,” an annual social gathering at The Master’s College, was approaching, and it seemed like half of the student body knew of her situation.

She had recently found a Winnie-the-Pooh stuffed animal in her mailbox, with a note asking her to find the guy on campus who held the matching Tigger. That guy wanted to be her date to “Fall Thing.”

Three days later, Lisa finally found who she was looking for: Stephen Wreesman, a fellow member of the school’s pre-med program and someone she knew through mutual friends.

As it turns out, this was only the beginning of the story.

Stephen and Lisa would eventually graduate from Master’s — Stephen in 2006, Lisa one year later. They would go on to get married, earn graduate degrees, start a family and depart for Togo, a small nation in West Africa where they’ve served as medical missionaries for nearly three years.

The Wreesmans represent a portion of more than 50 alumni of The Master’s University currently serving as missionaries across the world. Both Stephen and Lisa had an interest in pursuing missions before coming to TMU, but those desires crystalized in college.

“The value of our time at Master’s was that it wasn’t just spent studying science — though the science part was really good and did prepare us for graduate school,” Stephen says. “But there was so much more. There was discipleship. There was relationship. There were conversations about God’s Word.”

Both Stephen and Lisa took an interest in missions at an early age.

During Lisa’s childhood in Moreno Valley, Calif., her family and church constantly exposed her to missions work. “I remember reading a lot of missions biographies as a kid, and we’d have missionaries come through our church. I even had a missionary pen pal that I kept in touch with.”

When she graduated from high school, she spent part of the summer in Albania on a short-term mission trip. However, it was during her time at Master’s that her childhood interest in missions and her inclination toward nursing school took on a definite shape and became a pursuit of medical missions.

Stephen, too, was interested in missions from a young age as he grew up in Simi Valley, Calif. “I kind of thought that all Christian kids had an interest in missions from growing up in the church,” he says. “But someone challenged me and said, ‘No, that could be God calling you. Not everyone has that interest or that calling.’ So, by the time I came to Master’s, I was thinking about doing medicine. But I was also thinking about doing medicine so that I could do missions.”

Stephen and Lisa each, independently, had a moment at Master’s where they decided to set themselves toward missions unless given clear direction otherwise. So, when they began dating during Stephen’s senior year, they discovered that they were both already headed in the same direction. It seemed natural, then, to pursue the calling together.

Stephen says, “It was actually kind of funny, because after ‘Fall Thing,’ right before the night we started dating, we had gone to a Sunday evening talk by a surgeon about his work in Togo. We heard him talk about the hospital he helped start in southern Togo, and he said that they were looking to start another hospital in northern Togo. And I remember hearing that and thinking, ‘That sounds like a really cool place to be!’ And then we went out on our first date.”

Though they did not yet know it, Stephen and Lisa would later see that hospital in northern Togo with their own eyes. But first they had graduation, marriage, and graduate school ahead of them. They also started a family: They now have four children, ranging in age from 9 to 1.

After Master’s, Stephen went through a prestigious program at the Johns Hopkins University School of Medicine in Baltimore, Md., and Lisa tackled an accelerated master’s program in nursing at the University of Maryland.

“Both of us would say that Master’s prepared us really well for our graduate studies,” Lisa says. “While we were challenged — don’t get me wrong — we felt very well-prepared by our undergraduate studies, and we were able to keep up with the pace and the expectations.”

Meanwhile, they began exploring their options for when it came time to enter the mission field. One organization stood out: the Association of Baptists for World Evangelism (ABWE).

“We liked it because they had a strong medical program, but they also went beyond that to proclaim who Jesus Christ is to people, to disciple them, and to help them grow in and reproduce their faith,” Stephen says.

Stephen and Lisa began talking with ABWE about going abroad, and the organization suggested Togo. Over the next few years, while they were in the process of making a decision, the couple traveled to the tiny country tucked between Ghana and Benin on two different short-term trips.

Ultimately, the Wreesmans found that the work in Togo coincided with many of their passions: their heart for unreached people, their interest in medical work, and their love of discipleship. So, roughly three years ago, they moved to northern Togo as long-term medical missionaries.

So far, the experience has been difficult but immensely rewarding. The challenges can be as seemingly small as explaining the definition of “home” to four young children who have bounced between countries for most of their lives – or as serious as navigating complicated medical situations that can be outside Stephen or Lisa’s specialties.

“There’s an intensity there, because the people can be very sick, and the breadth of what you do is often outside of your specialty,” Stephen says. “I will not say that it’s easy, because it is not. It’s one of the most challenging aspects of our lives. But it’s also really good.”

Physical and spiritual needs are uniquely intertwined when it comes to medical missions, and this fact offers Stephen and Lisa a wonderful platform for sharing the gospel.

Says Stephen, “When people are suffering and going through these hard times, they’re often very cognizant of their own mortality. So, it’s a great opportunity to practically live out the love of Christ for people by taking care of them, which then opens doors because people become willing to listen.”

For example, one man was hospitalized for a few days because of a snakebite. During that time, Stephen shared with him about Jesus, and the man expressed interest in learning more. Several months later, the same man showed up at the Wreesmans’ home Bible study, and because of what he heard there, he decided to follow Jesus.

“It’s neat to see how God was working in his life, even in the midst of that time,” Stephen says. “And I laugh because when we think of snakes, we think of Genesis 3 and the fall, and here’s God saying, ‘I’m going to use this snakebite for my glory.’”

As it turns out, though, Stephen and Lisa were not the first TMU alumni to serve at ABWE’s hospitals in Togo. Lisa remembers, “When we started going there on our short-term trips, people would say, ‘Oh, you’re from Master’s? We’ve had teams here from Master’s!’”

These teams from TMU had a strong reputation — something that isn’t always true of short-term groups, which in some cases can be more of a burden than a blessing to long-term missionaries. But since the Wreesmans moved out to Togo, their hospital has already hosted another well-reviewed team from Master’s.

“They were fantastic, which speaks volumes to the teaching and the preparation they went through ahead of time,” Lisa says. “They did everything from childcare to planting trees, painting walls, and scrubbing the hospital floors. We were really blessed by them.”

Stephen and Lisa’s own preparation at Master’s has also served them in numerous ways.

“To be a doctor is much more than just applying medical science,” Stephen says. “You have to care for people, love them, show compassion to them, and have integrity. And being a doctor isn’t an end to itself. It’s an opportunity to serve the Lord. And at the end of the day, you’re not the hero of the story. And so I think being at Master’s helped solidify my thinking in this way.”

Lisa agrees: “I think my idea of what missionary work is and why it’s important grew and expanded while we were (at Master’s). I was also taught the idea of vocation as ministry. Whatever we’re doing in life — whether it’s working as a doctor or a nurse in the U.S., or doing the same thing overseas, or even being a mom — I was taught to see that as the way I serve God, and to see what I’ve been given to do on any given day as a way to pour my life out and serve God and love people.”

Please join TMU in praying for the ABWE missionaries in Togo, as travel restrictions have cut them off from short-term help they normally benefit from. Pray also for Stephen and Lisa as they are currently stateside, reconnecting with family and with supporters.

If you or someone you know is interested in being equipped by The Master’s University for a life of faithful service to Jesus Christ, whether as a missionary or in any number of vocations, [click here](https://www.masters.edu/requestinfo) for more information.