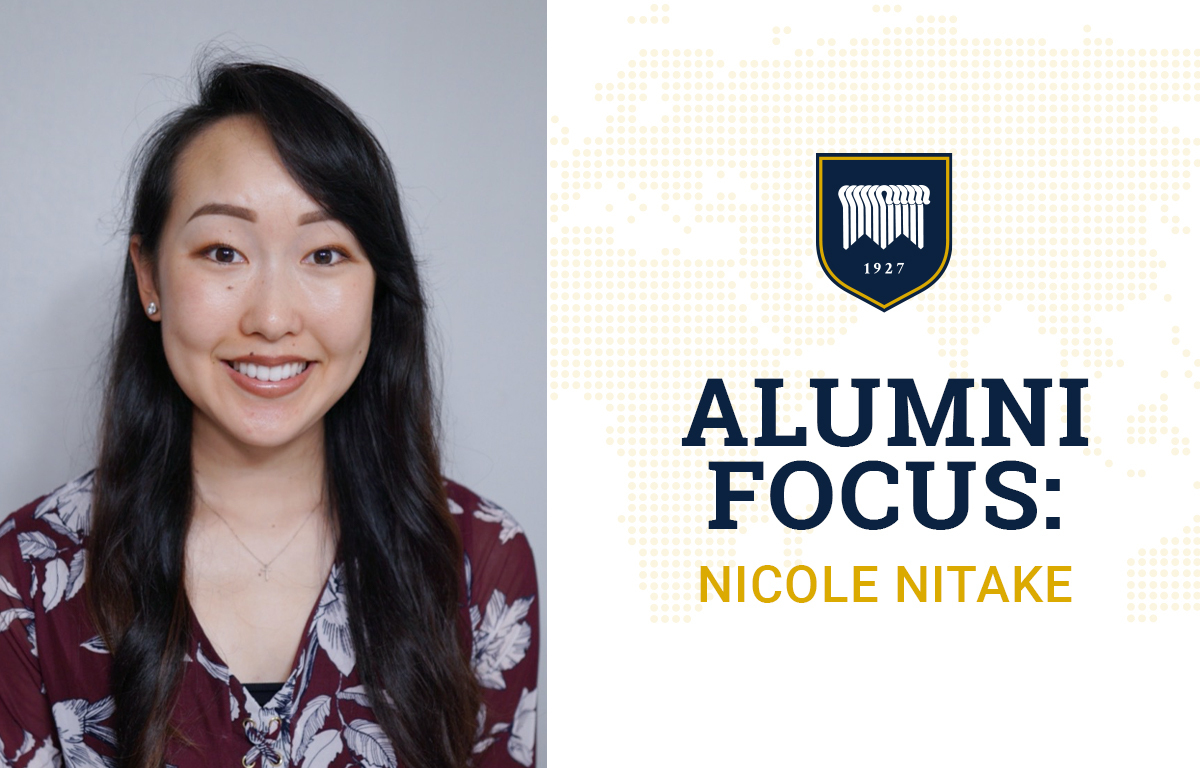 Dan Waldeck still can’t remember where or how he found the email address.

In 2012, The Master’s University women’s basketball coach had traveled to Anaheim to watch one of his prized recruits in a playoff game. In the process, he came away equally impressed by a senior guard on the other team with seemingly unlimited shooting range and nonstop energy.

Waldeck was interested, but his roster was full. So he left the gym without talking to the new prospect.

A month later, the Mustangs’ situation changed, and Waldeck was left kicking himself. How would he contact that impressive, unknown player when he could barely remember the name of her team?

The next part of the story remains a mystery nearly a decade later. Somehow, Waldeck tracked down Nicole Nitake’s email address and successfully recruited the Torrance, California, native to Master’s—where Nitake would come to faith in Christ, write her name in TMU’s record book, and lay the academic foundation for what came next.

This spring, Nitake graduated with a doctorate from UC San Diego Skaggs School of Pharmacy and Pharmaceutical Sciences, and her father, Mike, still can’t get over how the journey began.

“You never could have predicted that this could have happened and the way it changed her life,” Mike says. “I honestly feel like it was planned.”

When she arrived as a freshman at Master’s in the fall of 2012, she says she believed there was a God and that He loved her. She was open to learning more about Christ, but she wasn’t sure which religion was true, and she was skeptical about the authenticity of her classmates’ faith.

Nitake thought TMU students believed the Bible only because their parents did. During small groups in Sweazy dorm, she says she “didn’t hold back.”

Nitake was intrigued. In chapel and class, she learned how history supported the Bible’s narrative—initially one of her biggest hang-ups—and she was impacted by conversations with her basketball teammates.

God used it all, and Nitake says that at some point in the middle of her freshman year He opened her eyes and softened her heart to the truth that Christ had died for her sins and risen from the dead. She placed her faith in Him.

“I was talking to some of the girls and it just hit me that the gospel is absolutely true and there is nothing in the world that can save me apart from that,” she says.

Nitake says her newfound faith allowed her to gradually release the idols of popularity and success. “I gained purpose in life, and it allowed me to simplify my focus on Christ above all. I no longer had to stress about being the best or how the world viewed me,” she says. “It only matters now how God sees me and my heart.”

Over the next three years, Waldeck saw a dramatic change in the way Nitake prayed before practice, contributed to team Bible studies, and cared for other players.

“She really started to understand what it meant to follow the Lord and then made it a commitment,” Waldeck says. “It was amazing.”

And it was something Nitake felt she couldn’t keep to herself. She had to tell her family.

“I love them so much, and so I felt the only way to truly love them was to show them the love of God as well,” she says, adding that her family’s response has been overwhelmingly positive.

Mike, Nitake’s father, says he witnessed a change in the strength of his daughter’s convictions.

“It gave her direction. For a lot of young people, it’s difficult for them because they’re just not sure what they want to do or where they want to go or how they want to behave,” he says. “But with Nicole, it painted a clear road for her to follow.”

Never the fastest or strongest player as a kid, Nitake focused on her ability to shoot the ball — and make it — from long distances. That skill carried her up TMU’s all-time three-pointers list, where she ultimately finished second with 211 makes. She remains first on the Mustangs’ career list for three-point percentage (43%), and she helped Master’s win the Golden State Athletic Conference tournament championship in 2015.

Nitake treasures the relationships she formed on the team (she remains in contact with several former Mustangs, with a rendezvous scheduled in the near future). But her basketball regimen made for a whirlwind four years at TMU.

As a biology major, Nitake balanced classes like organic chemistry with two- or three-hour practices, workouts, chapel and church attendance.

She says the itinerary was grueling, but that it ultimately prepared her for UC San Diego, where she began her doctorate studies in 2016.

The juggling act forced Nitake to be efficient and, most importantly, to fully trust and rely on God. It was a lesson she’d need again.

“At pharmacy school, I would get stressed. I would worry about an exam, or flunking out of school,” she says. “But ultimately, I knew that God was in control. So regardless of what happened, I knew that it was going to be OK.”

Nitake also received help from her classmates in “tight-knit” study groups, and she found support in a local church, a resource TMU’s staff had always emphasized.

“The church kept me grounded and kept me having the right perspective,” she says.

Eventually, Nitake found her footing by displaying the same consistency and commitment in the classroom that she had on the court.

“In basketball, you have to be determined and focused because you can easily be like, ‘I’m not feeling it today. I’ll just put up a couple shots in the gym, and I’ll be done,’” she says. “And if you only study for as long as you feel like it, then you’re probably not going to reach your goal. You have to have a strong mindset, know what you’re going to accomplish before you set out to do it, and get it done.”

Nitake also set out to start a Bible study for her UCSD classmates. Her group regularly hosted events and small groups, creating an environment where students could be spurred on in their studies and in their faith and where others could hear the gospel. “I was hoping to create a light on campus,” Nitake says.

After she graduated in spring of this year, Nitake left the Bible study to younger students she believes will be faithful to Christ and to the vision of witnessing to their classmates.

As for Nitake, she has continued working as an intern at a pharmacy near her parents’ home in Torrance.

She plans to take national and state licensing exams this fall so she can begin working as a pharmacist. The details of her career path aren’t yet clear. But in light of what God has already done, Nitake is comfortable with that.

“I just hope to carry myself with integrity in the workplace and to be a witness to my future patients and coworkers,” she says.

Well before coming to TMU, Nicole Nitake already had interest in pharmaceutical sciences and skill as a three-point shooter. But it wasn’t until her freshman year here as a biology student and basketball player that she gained something vastly more important: saving faith. Our 2016 graduate tells the story of how she came to TMU, was saved, and went on to earn her doctorate in pharmaceutical sciences at UCSD.