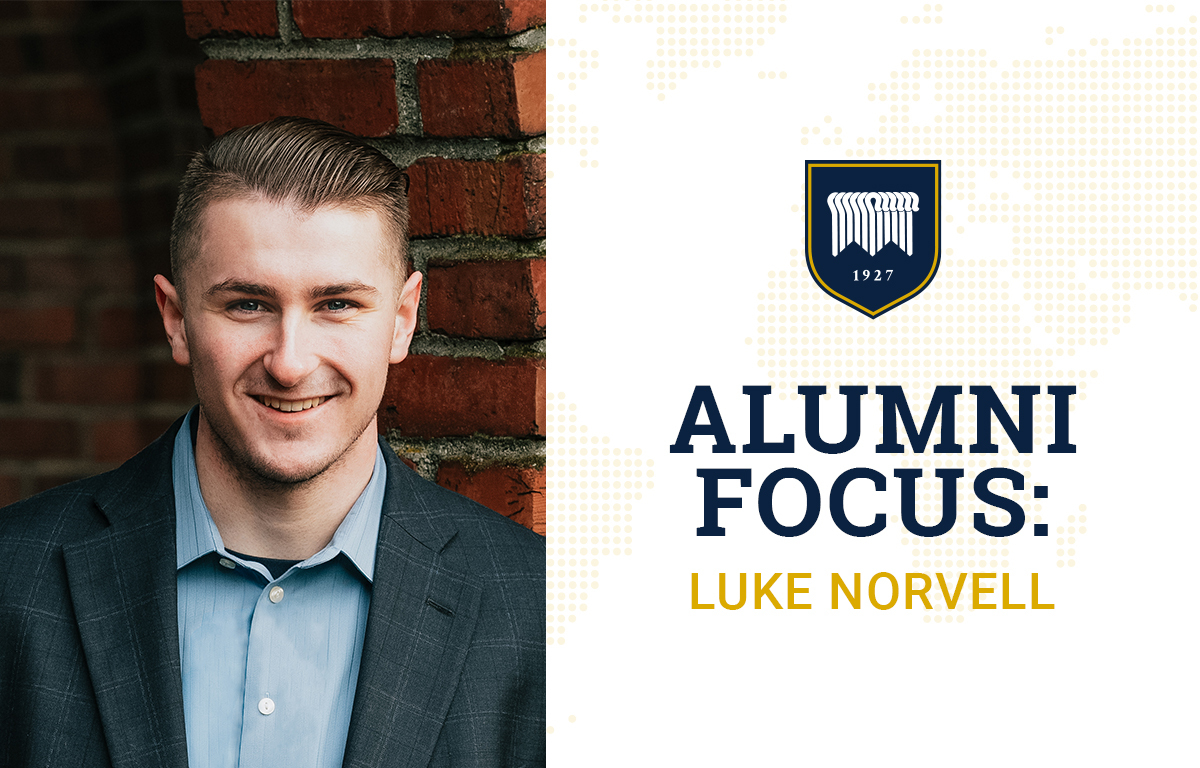 *Luke Norvell loves opera*. That’s about as understated as saying the recent graduate of The Master’s University has just an OK singing voice.

Norvell, who will soon attend the Academy of Vocal Arts, one of the world’s premier institutions for training opera soloists, wears his devotion to opera on his sleeve.

“Opera is an art form that encompasses all art forms,” says Norvell, who also earned acceptance to The Juilliard School. “There’s music. There’s dance. There’s visual arts. There’s singing. There’s instruments. It has everything you need.”

As it turned out, Norvell’s passion for opera led him to briefly consider transferring after his freshman year to a larger music program near his home in Washington state. But that never happened.

Looking back, he says he received both the vocal and spiritual training he needed.

You can’t tell the story of Norvell’s time at TMU without mentioning Eric Carampatan.

An accomplished baritone, Carampatan has performed all over the world. He’s wowed fans in some of Europe’s best opera houses. He’s been a soloist in Sydney. He’s served as a guest artist at the Shanghai Grand Theatre.

Carampatan is also a follower of Jesus Christ. And for the last four years, he’s served as an adjunct professor in TMU’s School of Music. That’s where, in the fall of 2017, he met a freshman with an impressive voice and room to grow.

“Luke said without hesitation that he wanted to sing opera,” Carampatan says. “So I said, ‘We have great work to do, and no time to waste.’”

The son of a doctor, Carampatan often begins his lessons by emphasizing the anatomy of singing. He points to charts of rib cages, lungs and diaphragms — insisting that proper breathing technique is as important to singing as air tanks are to scuba diving. In both cases, you don’t want to run out of air. “The consequences would be dire,” he says.

Another key area of development came in urging Norvell to be himself. Young singers, Carampatan says, often want to imitate famous voices, like Adele or Pavarotti. “But we’ve already had those,” he says. “I tell every student, ‘You’ve got to be what God made you.’”

Despite the early progress, Norvell considered transferring to a university closer to home that featured a voice teacher he’d worked with previously (the school was also scheduled to put on two shows that piqued Norvell’s interest).

On the other hand, Norvell believed in Carampatan. He appreciated the instructor’s attention to detail and ability to merge musicality, presentation and vocal technique. He also trusted that TMU’s School of Music, which is accredited by the National Association of Schools of Music, would help him take the next step in his career.

Over the next three years at TMU, Norvell continued to unlock a storehouse of natural talent. Carampatan helped him successfully transition from singing as a baritone to a tenor, a better fit for his voice, and together they worked on Norvell’s stage presence. “When I came here, I didn’t really think about acting. All I thought about was singing as well as I could,” Norvell says. “But the reality is, if you can’t convince the audience that you really believe what you’re saying, then you’ll lose them.”

Norvell didn’t want that. So, he watched himself in the mirror, analyzing how he could better embody the characters he played and growing more comfortable day by day.

Meanwhile, Norvell sang with The Master’s Chorale and University Singers. He also improved his diction in Italian and French classes offered by the School of Music, and in a class on conducting, he learned how a production’s score should influence character and vocal decisions.

Onstage, Norvell took cues from Sarah Dixon, TMU’s director of vocal studies. He debuted in “The Telephone” as a sophomore, and he starred in the school’s opera scenes as a junior and senior.

In the process, his voice continued to mature.

“His voice is full, but not too heavy,” Dixon says. “He moves smoothly from note to note. And he can powerhouse the high notes, which as a tenor, you’ve got to be able to do every time — and he does it.”

It helped that Norvell always put in the work. “He never came to a lesson unprepared,” Carampatan says. “Never.”

TMU’s commitment to Christ and Scripture was another major reason Norvell decided not to transfer.

As a teen, baseball games had often kept Norvell from church — something that he says stunted his spiritual growth and knowledge of the Word. So, as a freshman, he was awestruck by Dr. Abner Chou’s Essentials of Christian Thought class. Norvell especially enjoyed the course’s focus on how to study the Bible.

“That’s something that’s going to carry me for the rest of my life,” he says.

![Luke Norvell 2.jpeg](/uploads/Luke%20Norvell%202.jpeg)Norvell starred in TMU’s opera scenes as a junior and senior.

Norvell’s time in the School of Music had a similar impact; professors like Dixon and Dr. Paul Plew emphasized the true reason to pursue the craft. “It’s so easy as musicians to idolize what we do, and to do it for the wrong reasons,” Norvell says. “We’re called to use the gifts that God has given us as an act of worship.”

Christians are also called to encourage one another, something Norvell experienced firsthand at TMU.

“It was so valuable to have people in my dorm who know the Lord and are able to keep me accountable,” he says. “Just being with other godly men who are in the same stage of life, to be able to talk to them about the Lord and study the Bible with them was something I wouldn’t have had hardly anywhere else.”

There was fun to be had, too, like day trips to San Diego or the beach and a visit to Downtown Disney. “Some of my best friends are from my dorm,” Norvell says.

Then there was chapel, where messages pointed Norvell to Christ. One preaching series that stood out was on “Compelling Christianity.”

“It got me asking the question, ‘How can I best have a compelling faith that helps people see Christ and want Him,’” Norvell says.

As the director of vocal studies, Dixon always tells incoming students about additional performance opportunities at nearby opera companies in the greater Los Angeles area.

In addition to performing at TMU, he appeared in more than 10 other shows, one of his favorite roles coming as Prince Charming with an opera company in Orange County.

On several occasions, Dixon and other TMU professors traveled to watch Norvell — often receiving similar feedback from directors and cast members. “They always say, ‘Oh, Luke is the best. He’s always prepared. He’s always on time. He’s always kind,’” Dixon says. “Whether they know it or not, Luke is representing the Lord well.”

Accepted to The Juilliard School, Eastman School of Music and several other prestigious programs, Norvell chose the Academy of Vocal Arts in Philadelphia, in part, because tuition was free and it specializes in performance training (in four years, he’ll receive an artist diploma).

One day, Norvell hopes to perform with opera companies in the U.S. or overseas — an aspiration Carampatan believes is well within reach.

“He’s a tenor and he can sing difficult parts,” the instructor says. “He has the work ethic, and we know that whatever God wants you to walk into, you’ll be prepared for it. Luke has the talent to be very successful.”

To learn more about TMU’s School of Music, click [here](https://www.masters.edu/schools/school-of-music.html).