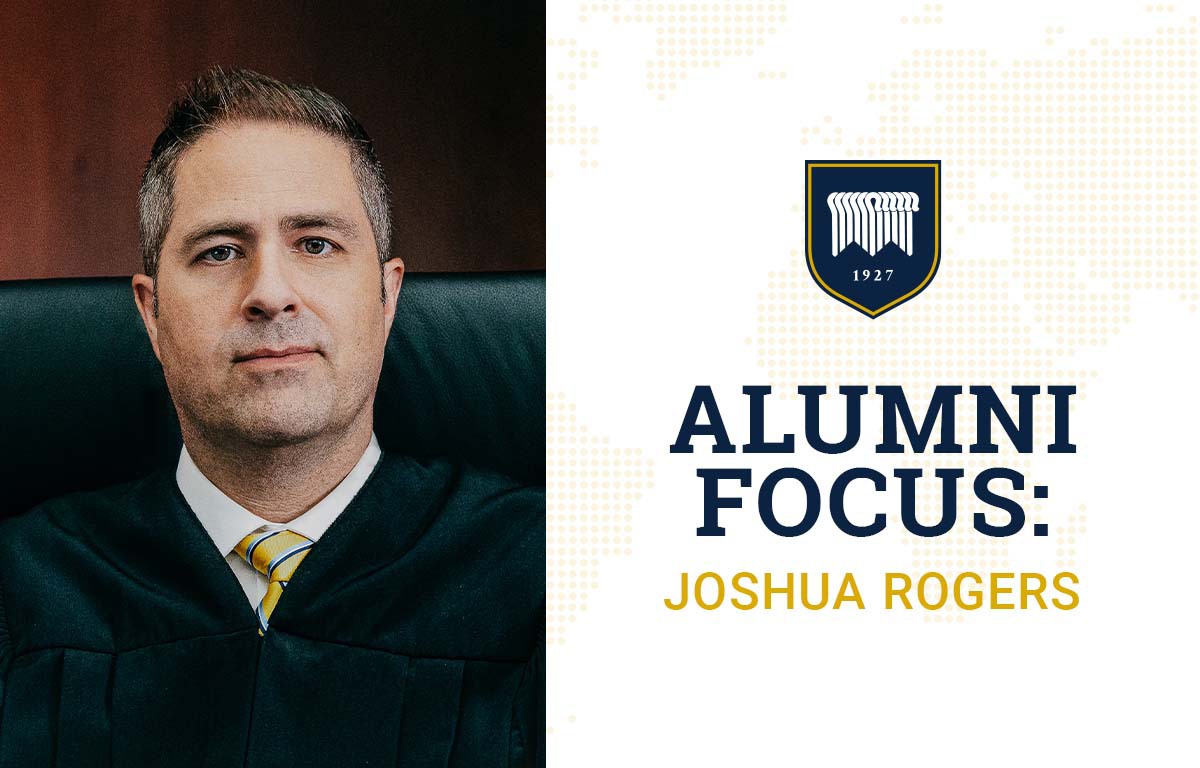 Here’s something that won’t come as a surprise: Joshua Rogers is an exceptionally busy man.

It’s the nature of his job as a superior court judge in Arizona, his weeks a constant flow of hearings, trials and paperwork. Since the state’s governor appointed him to the Maricopa County Superior Court in 2015, Rogers has rotated between civil, family and juvenile assignments, each with its own challenges and demands on his time. He’s also married with four children, and he serves in his church.

Here’s something that may come as a surprise: On a Friday afternoon last summer, as another full week came to an end, Rogers cleared his schedule in order to meet with visitors from his alma mater, The Master’s University. The visitors were in Mesa, Arizona, to film an alumni focus video, and Rogers made his way down from his chambers on the fifth floor of the Southeast Regional Court Center to greet them in the lobby. He sat for an on-camera interview and answered additional questions in his chambers. Then, still dressed in a white button-up shirt and yellow tie, he helped his guests haul video equipment back to the ground floor and out to the parking lot.

If you’re looking for an analogy as to how Rogers approaches his prestigious position in the fourth largest trial court system in the nation, this is it. He doesn’t see himself as being above those who appear in his courtroom. Instead, he hopes to meet people where they’re at, even when it’s a particularly dark place, and help deliver the best possible outcome for all parties involved. More than anything, he hopes to impact people in such a way that they see Christ in him.

Rogers says his time at The Master’s University prepared him to view his career this way. He says the school reinforced his biblical worldview and helped him identify his true calling as fulfilling the Great Commission wherever God called him to. He says he’s glad he didn’t transfer from TMU after just two semesters. Even if, originally, that was the plan.

Politics. For some, the topic is strictly off limits at family gatherings. But not for the Rogers family.

Joshua Rogers’ father, Jay, was an attorney who twice ran for public office. His uncle served as a judge in the family’s small hometown of Marion, Ohio. Rogers’ mother, Marian, regularly tuned the radio to political talk shows. “It’s not surprising I took the route in life I did,” Joshua Rogers says.

It was also on the radio where Marian came across an influential voice. She began listening to Dr. John MacArthur, and over time, MacArthur’s ministry had a significant impact on the Rogers family. So much so that Marian and Jay asked each of their five children to attend TMU (where MacArthur was president) for one year of Bible training. Then, if they wished, they could go elsewhere.

Joshua Rogers, the youngest of the five, arrived at Master’s in 1995. After a year of studying the Bible, he planned to transfer in order to continue preparing for a career in government.

But leaving wasn’t so easy.

After attending a public high school, Rogers cherished the godly friendships he formed at TMU, where classmates encouraged him to follow his biblical convictions rather than tearing them down. “I was surrounded by people who wanted to walk faithfully with Christ, and that caused me to want to walk faithfully,” he says. Rogers could also tell that his professors cared about his soul. Class time was about more than imparting information. It was about transformation.

Rogers had begun to question his decision to leave TMU by the time he sat down to talk with Dr. John Stead, a professor of political studies, near the end of Rogers’ freshman year. Stead left no doubt. He knew TMU could prepare Rogers for a career in government and for a life of eternal impact.

“Dr. Stead had an entire plan for me before I even walked in there. He was very confident,” Rogers recalls. “He said, ‘Look, you can go to any college, and you’ll get some good professors and some not-so-good professors, but I think between (Dr.) Gregg (Frazer) and I, you’ll get two pretty good ones here.’”

Says Rogers, “At that point, I knew I was going to stay.”

Rogers at his desk in Mesa, Arizona.

In the years that followed, Rogers signed up for a heavy dose of classes with Frazer and Stead (“I don’t think I would have found better professors than I found with those guys. They were fantastic,” he says now). Those classes infused Rogers with a firm understanding of the Constitution and an appreciation for its framers. In a broader sense, TMU’s liberal arts curriculum provided Rogers with opportunities to learn to write and communicate with precision, and to develop critical thinking skills.

More than anything, though, Rogers says his time at TMU reinforced his biblical worldview: that God’s Word is sufficient and inerrant and that as a follower of Jesus Christ, his highest calling is to honor the Lord in everything — including his career. He still has a notebook from the class on Romans he took with Dr. C.W. Smith. “Every once in a while, I look through it and I’m reminded of the things he taught and how to read the Bible, how to study the Bible, how to take that and apply it to my life,” he says. Rogers says he loved how accessible his professors were at TMU, where even now the professor-to-student ratio continues to hover around 12:1.

“They knew their subject matter like no other. But even more importantly, they were invested in us,” Rogers says. “I mean, we were over at their homes. We were having dinner with their families. They cared about us.”

Rogers certainly left a lasting impression on his professors.

“Josh Rogers was one of my favorite students,” Stead says.

Says Frazer, “I knew he would be successful at whatever he did.”

That turned out to be true.

After graduating from TMU in 1998 with a degree in political studies, Rogers attended law school at Pepperdine, finishing in the top 10% of his class. He then moved to Phoenix — the hometown of his wife, Carie — and began working as an attorney. In 2015, Arizona Governor Doug Ducey appointed Rogers to the Maricopa County Superior Court.

“Joshua is an intelligent and capable lawyer who has dedicated a tremendous number of pro bono hours to his church, the local youth and the people of Arizona,” Ducey said in a news release at the time. “He’s a stellar member of this community and will be an excellent and impartial judge.”

Joshua Rogers with his parents, Jay and Marian, at his TMU graduation in 1998.

In Arizona, the superior court is the trial-level court. Judges rotate between family, juvenile, civil and criminal assignments. Rogers was recently on a family rotation, which meant he was in the courtroom five days per week for trials or hearings. When he wasn’t in court, he was writing rulings on those cases. Often the subject matter dealt with divorce and child custody.

Rogers doesn’t preach from the bench. But he isn’t shy about his faith or how it impacts his work.

“In terms of my worldview, divorce is something I don’t want to see,” Rogers says. “But at the same time, I also know that I can be a light in a dark place for these people — especially the kids, who are the ones who are impacted the most. I can try to put these kids in the best situation for them. I can show kindness to them and the parents, and try to remind them of what love looks like.”

In fall 2021, Rogers was scheduled to rotate to a juvenile calendar, which involves cases of child abuse and neglect. “You’ve got substance abuse, domestic violence, all those types of things that put children in unsafe situations, and we need to try to fix those. It’s probably harder subject matter, but I think it will be very rewarding because of the opportunity to make an impact for the kids.”

One day, Rogers hopes to work in Arizona’s Court of Appeals, one rung below the state’s supreme court. But wherever he is, Rogers’ ultimate goal remains the same.

“It doesn’t matter whether your career is specifically working within the church or in the profession that you’re called to,” he says. “Christ talks about it in Matthew 5 in the Sermon on the Mount: We’re called to be lights wherever we are. We’re called to serve and to bring Him glory. That’s our job. And that’s what TMU prepared me to do.”

You can learn more about TMU’s political studies program [here](https://www.masters.edu/academics/undergraduate/politicalstudies).