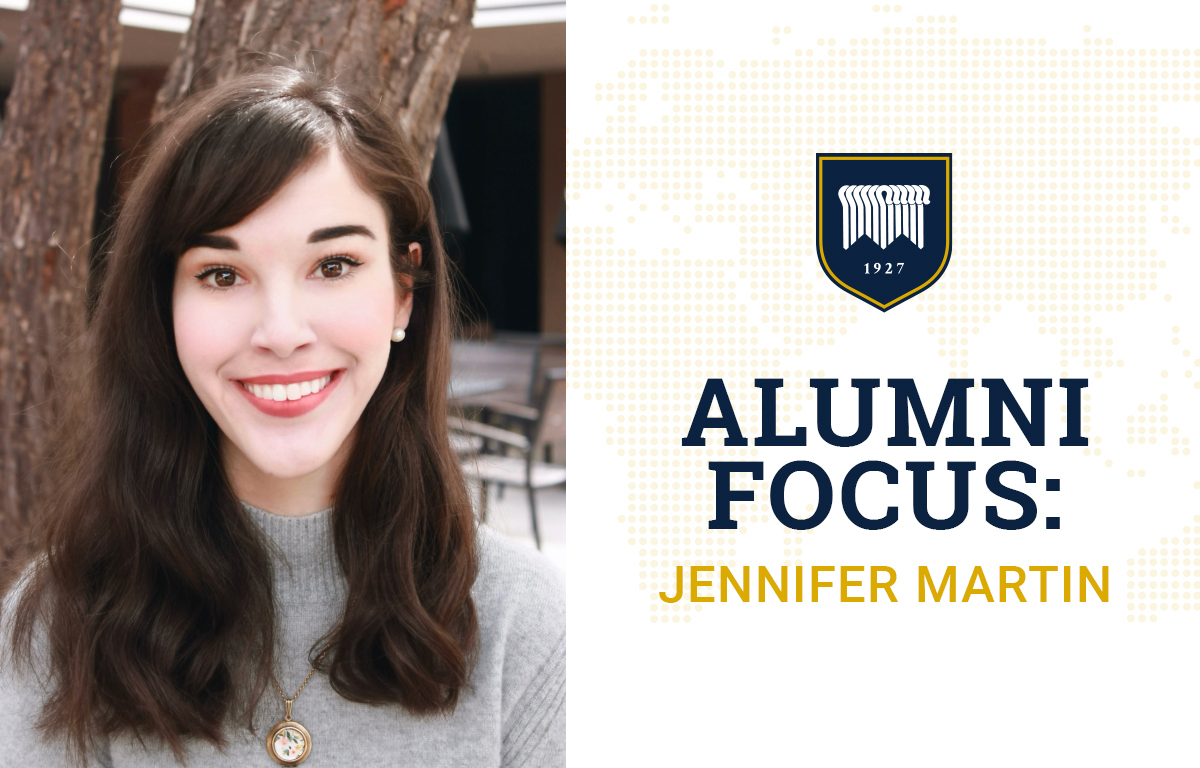 Jennifer Martin had no intention of participating when she attended auditions for a theatre arts production at The Master’s University during the fall of her freshman year.

She was only there to support her roommate.

At least, that was the plan. Instead, someone convinced her to try out. She got a part. And during the next four years, she continued to serve on both cast and crew for eight shows, even serving for two seasons as the props manager and set design crew lead.

Now, as she studies interior architecture at the prestigious Fashion Institute of Design & Merchandising in Los Angeles, she says she’s deeply grateful for her experience at TMU and specifically in the theatre arts program.

“I never guessed at the time that all the pictures of my set designs would make a great portfolio for FIDM. That’s actually how I got into FIDM,” says Martin, who graduated as a business major from TMU in 2018. “The Lord blessed my efforts at Master’s by using the theatre program to open doors later on for me. I’m very thankful for His perfect timing in my life.”

Martin’s first connection to Master’s came early. She attended Grace Community Church as a child, and though her family ended up moving away from the area, she had a deep desire to return and go to school at The Master’s University, where her former pastor, Dr. John MacArthur, was the longtime president and now serves as chancellor emeritus.

“I thought, ‘This is where the Lord wants me to be,’” she says. “And so I applied to go, even though I ultimately wanted to pursue interior architecture.”

Martin first became interested in interior architecture during an internship in high school. As she describes it, “It combines the creative and artistic with the logical and mathematical. So it’s the perfect blend of the two sides of my brain.”

At TMU, Martin chose to study business with an emphasis in public relations. Her reasoning was that if she eventually went into interior architecture, she might also want to open her own business. Still, with her more creative ambitions, she didn’t quite fit the stereotype of a business major. “I wasn’t a very typical business major. In fact, one of my professors always called me his ‘non-business-major business major.’”

“The business professors saw that I was working through the material, and they were really helpful,” she says, highlighting her advisor, Dr. Kevin Hill.

It also helped that, providentially, Martin had found an outlet for her creative side in theatre. She would work hard at her business classes during the day, and in the evenings she would practice her lines or organize props.

When it came to designing sets, Martin found inspiration from her imagination and from extensive research into time periods, customs, culture and color.

The process of turning ideas into realities always began by meeting with TMU’s Theatre Arts Director Tricia Hulet. Once they settled on a course of action, they would meet with various prop houses and landscape architects in order to rent anything they couldn’t make by hand.

“Designing the set for ‘The Secret Garden’ was so much fun,” Martin says. “A floor plan was both hand-drawn and digitally drawn to scale with the dimensions we had for the stages. That way we could easily edit it at any time to slant a wall or build stairs in a different corner and see what it would look like before the build.”

Then it was time to construct the stage.

“It was always a rewarding challenge to change what had been last semester’s Modern furniture to, say, something Victorian or Gothic,” Martin says. “That was done by an amazing crew of student artists and fellow imaginative people.”

Martin says it was particularly beneficial to learn how to lead a team (“Because I had absolutely no confidence when I entered the program,” she says) and how to clearly communicate her creative vision.

“Many of the things I learned from that program flowed from the director, Tricia Hulet, who’s a wonderful example of humility and excellence in the world of theatre, which is so often a fight for the spotlight,” Martin says.

More than anything, though, Martin says she was impacted spiritually by her time at TMU.

> Getting to hear preachers like Steve Lawson or Dr. MacArthur on a weekly basis encouraged my faith and grounded my beliefs in truth,” she says.

That prepared Martin to enter the professional world, where she worked in both the accounting and marketing fields for over a year before the Lord provided a spot in FIDM and a job at a nearby church.

Still, Martin holds her plans loosely. “The Lord could change how He uses my degree at any time. I don’t know what the future will hold. But I do know that any and all of the creative abilities the Lord has blessed me with point to the ultimate Creator himself,” says Martin, who hopes to graduate from FIDM in the spring. “I echo Romans 11:36, which says, ‘For from Him and through Him and to Him are all things. To Him be the glory forever!’”

In the meantime, Martin wants to make the best of her time at FIDM by being a witness for Christ to her classmates — and, occasionally, by making the short drive back to TMU for the latest theatre arts production.

To learn more about the theatre arts program at The Master’s University, [click here](https://www.masters.edu/theatre-arts).