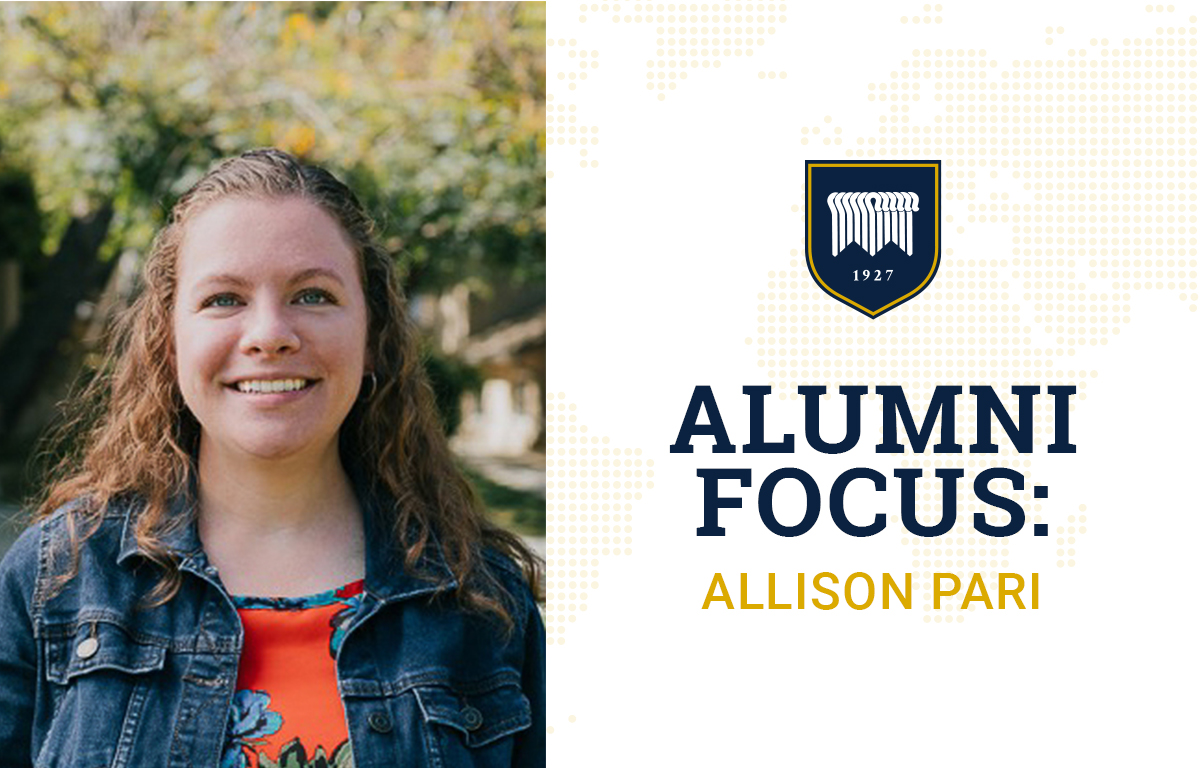 Allison Pari didn’t intend for her comment to be taken seriously.

Pari had graduated in 2012 from The Master’s University with a degree in communication. She went on to study history at Cal State Northridge. So, when she told her mother, Cheryl, in 2017 that given a do-over she would have majored in science and pursued veterinary medicine, Pari wasn’t plotting a return to school. She was simply reflecting on what might have been.

Cheryl didn’t see it that way.

So began Pari’s four-year journey toward finally studying something that had always been her passion. She returned to TMU for prerequisite classes, volunteered with animal organizations — working with guide dogs and feeding baby raccoons — and applied to UC Davis, the top veterinary school in the nation according to U.S. News & World Report.

Pari’s diligence — and willingness to begin again — paid off in January when she learned she’d been accepted at Davis where she’ll start classes this summer.

“I’m just amazed that God has given me all these opportunities along the way,” Pari says. “I wouldn’t be so bold as to say that God wants me to be a vet, because ultimately only He knows what His plan is for my life. I’m just thankful for the opportunities He’s given me.”

Pari has always loved animals. Growing up, her family kept a long list of pets ranging from cats, rats and dogs to a gecko named Grace.

She owned stuffed animals too, sometimes pretending to inject them with plastic syringes before applying a bandage and assuring them everything would be OK.

Make-believe was fun, but Pari never saw a serious future as a veterinarian.

Instead, she studied print media at TMU before pursuing a graduate degree in history at Cal State Northridge. At the time, her goal was to teach; but her heart wasn’t in it.

During that decisive conversation in 2017, Pari’s mother told her it wasn’t too late to chase a dream. Pari’s father, Ian, agreed.

“One thing my dad always said was, ‘You could choose not to pursue being a vet because you feel like it’s too late. But, four years from now you’ll still be 33 — either with a veterinary degree or without one.’”

Pari decided to go for it. She researched what it would take to get into vet school and surveyed her options. Her first step: enrolling in a chemistry class at TMU. “I’d never taken chemistry in high school, so I really knew nothing about it,” Pari says. “I took it, and it was like, ‘Oh, I can do this.’ So I kept going.”

At times, Pari’s schedule was relentless. She was simultaneously working full-time as an executive assistant at Master’s, finishing her graduate degree at CSUN and taking science classes. But she’d grown accustomed to balancing work and school, and it helped, she says, that her boss at TMU, Dr. John Stead, was supportive and flexible.

Pari planned lunch breaks at odd hours in order to attend class. Sometimes she left work early for an evening lab and returned to the office later that night to finish her shift. Then she drove home and did homework for courses like organic chemistry and microbiology.

Her smarts and dedication caught the attention of Dr. Joe Francis, dean of TMU’s School of Science, Mathematics, Technology & Health.

“She understood the value of education,” Francis says, “and she was gifted intellectually and disciplined and excited about God’s creation.”

As an undergrad at TMU, Pari had grown in her knowledge and love of Scripture (“Master’s really solidified my understanding of the gospel and the Bible through chapel and Bible survey classes,” she says). And upon her return, she was delighted to study under professors who interpreted science through Scripture, teaching a literal six-day creation and a historical space-time fall.

Outside the classroom, Pari pursued hands-on experiences. She volunteered at a guide-dog center and an animal shelter. Through Master’s, she signed on for a summer internship working with animals considered exotic, like guinea pigs, turtles, rabbits and snakes. She especially enjoyed caring for baby raccoons. “They’re small as kittens but so incredibly strong,” she says.

Each of Pari’s experiences confirmed her desire to pursue veterinary medicine, and in 2020, she applied to UC Davis. She also left her job at Master’s and began working at a specialty animal hospital as a doctors assistant in the surgery department.

When asked by former co-workers to describe her new job, Pari often used humor. “I said, ‘Well, my boss at Master’s never put a dog spleen on my desk and said, ‘Send this off to the lab.’”

It was no laughing matter, however, when Pari received a phone call in January informing her she’d been accepted to Davis. “I cried,” she says. “I couldn’t believe it.”

“Her journey is an example of how diligence and patience can result in great accomplishments, one step at a time,” Cheryl says.