This is TMU: Our History 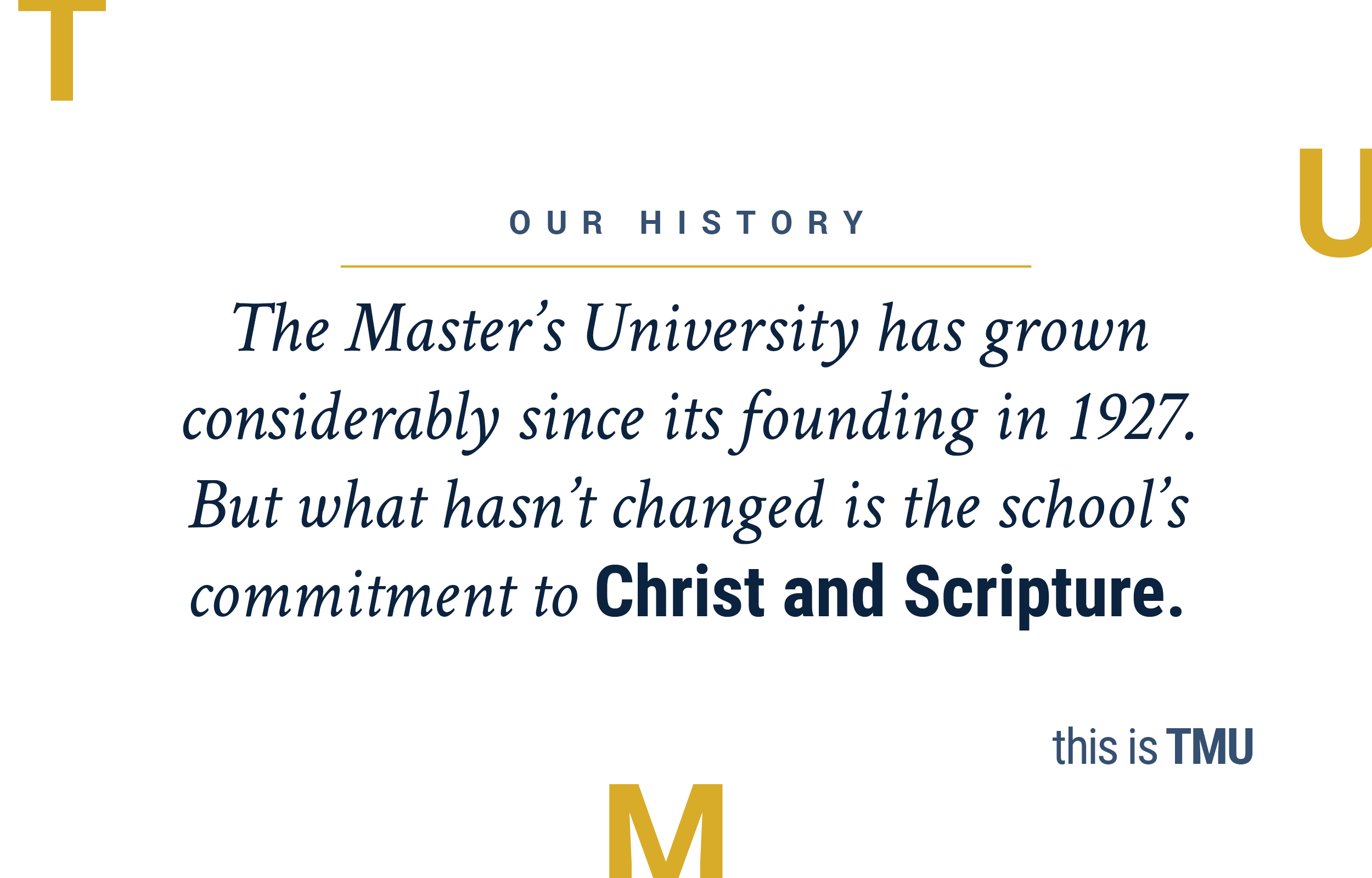 The Master’s University began as Los Angeles Baptist Theological Seminary in 1927, the result of the vision of Dr. William A. Mathews. He felt that there should be a Baptist seminary on the West Coast that would be true to the whole Bible and to the Lord Jesus Christ — one that would emphasize the consecrated and Spirit-filled life and would have a passion for lost people all over the world. He communicated his feelings to Dr. W. F. Farr and Dr. B.F. Fellman.

After prayerful consideration, these men felt led to proceed with the organization of such a seminary. In sincere dependence upon God, LABTS was launched in September 1927.

Men and women came to study the Bible at LABTS to prepare for service in the church, at home and around the world. In 1946, under the leadership of President Dr. H. C. Theisen, the seminary developed into a graduate program and launched an undergraduate school for the purpose of offering a bachelor’s degree. This step marked the launch of Los Angeles Baptist College as an undergraduate school, and it was the first step of the college and seminary becoming separate institutions.

In August 1959, Dr. John R. Dunkin became the president of the institution, and by the spring of 1961, the school had moved from its original location in downtown Los Angeles to Placerita Canyon in Newhall, California.

Under Dunkin’s leadership, the school enjoyed a season of unprecedented growth, and it established a residential program. It was during this time that many of the most recognizable buildings on campus were constructed, including Rutherford Hall, King Hall, Powell Library, Hotchkiss Hall and Bross Gymnasium (now The MacArthur Center).

In 1985, Dr. John MacArthur became the University’s eighth president. His commitment to the sufficiency of Scripture, the lordship of Jesus Christ, the promotion of distinctive Christian living, and the global advancement of the gospel made him a perfect fit. It was then that the institution changed its name to The Master’s College to better communicate the meaning and purpose of the education provided here. The Master’s College then transitioned to The Master’s University in August 2016.

As programs, leadership, and faculty have changed over the course of nearly 95 years, TMU’s commitment to educate tomorrow’s Christian leaders has remained the same. Today, under the leadership of interim President Abner Chou and Chancellor John MacArthur, The Master’s University continues to train those who desire to serve in the pulpit or on the mission field, as well as those who desire to influence commerce, science, and the arts for Christ’s sake.

The story of The Master’s University is ongoing, and the pages of history are being written today in and through the lives of students, faculty and staff. The University will continue to expand and progress to meet the challenges of a modern world, but we will never abandon our foundational commitment to build a school that truly honors the Master.

Find out more about TMU’s more than 150 programs, here.