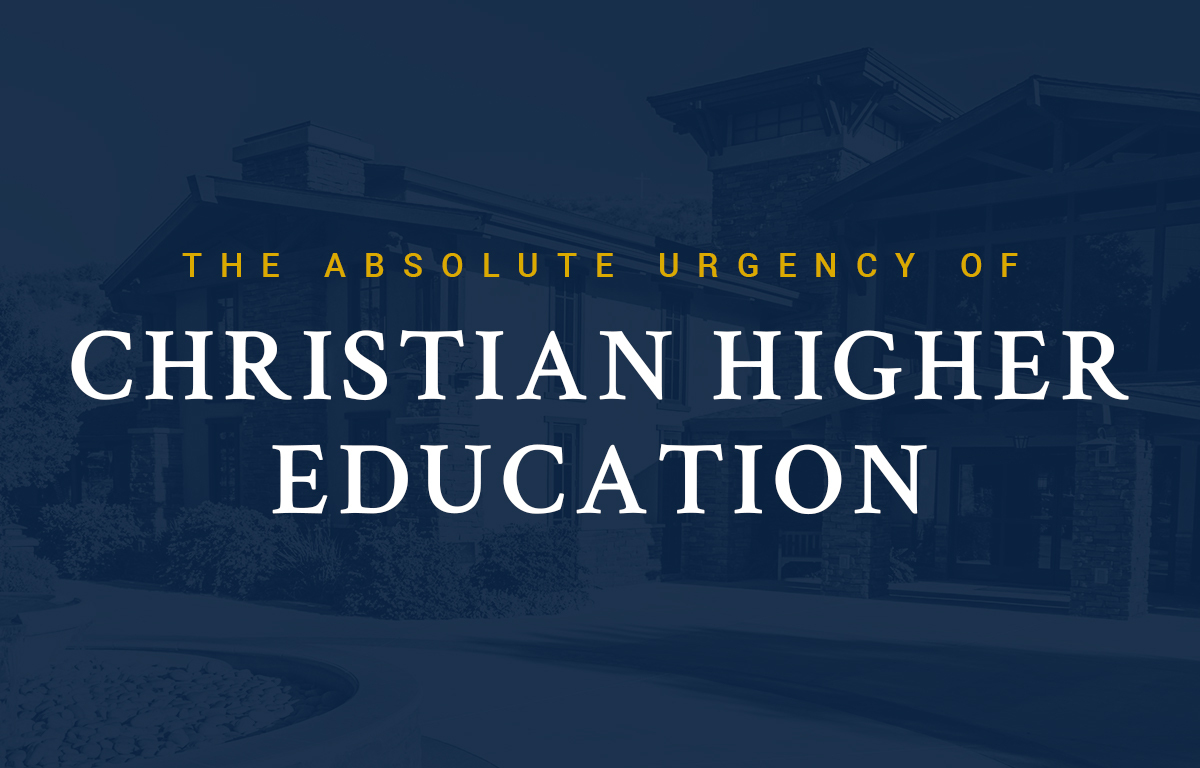 Christianity is in crisis.

Years of self-help, therapeutic deism, bad teaching, entertainment and man-centered ideology have utterly emptied the church at large of sound doctrine. It has become an empty shell, and the mounting external pressure of our culture threatens to crush it. The church lacks the deep convictions necessary to stand. That said, outside threats, coercion and persecution are not even necessary to derail evangelicalism. Because the church has imbibed so much worldly thinking and perspective, it lacks discernment, willingly capitulates and even happily joins the world in its efforts. American Christianity is ready to implode. That which was to be the pillar of truth (1 Tim. 3:15) has eroded and is ready to collapse.

Within this crisis is something that we might not perceive to be especially crucial: the choice of where to go for higher education. For most of us, we think of this decision as neutral. It really makes no difference if one goes to a Christian university, a school that is Christian in name only or a secular institution. The key is that one can get a job at the end of it. Everything else can be handled and negotiated. It really is a neutral decision; or so we think.

But everything in life is theological. Everything must be taken under the lordship of Christ (2 Cor. 10:3-5). And the decision about which university to attend is no exception, especially since nothing about it is remotely neutral.

Universities as an institution and industry are not neutral. The very purpose of undergraduate education in our society is to inculcate a particular way of thinking. That is precisely why a student cannot attain certain types of jobs right after high school. Employers assume that a college education solidifies a student’s reasoning so that he or she can operate rightly in the workforce. Just as vocational schools train individuals to work with their hands, so undergraduate education trains the mind. So, by design, universities work to ingrain a pattern of thought in their students. That is why every school does not merely offer classes in one’s major but has general education requirements that shape how one writes, communicates, reasons and perceives society. Thus, universities are not neutral ground. They are purposed to push someone to a certain form of rationality.

Classrooms then are not neutral. Professors have academic freedom to express their convictions. They teach subjects from their perspective and draw students to their conclusions. At secular institutions, the viewpoint in the classroom will be anything but Christian. As the Washington Times reported, professors who identify as liberal outnumber those who hold more conservative values by 12 to one. One Christian professor in a top secular university reports that if his colleagues knew of his faith, they would make his life difficult. So, in a university designed to impress how to think, one will encounter an environment that will do everything it can to convince someone to think contrary to everything that his or her parents, pastor and church have labored tirelessly to instill in them. Is it the best use of resources, then, to pay for someone to contradict everything you stand for? Furthermore, is it the best use of resources to pay for getting less instruction than you need? After all, it is documented that because of the thought agenda of college campuses, most classes in one’s major are increasingly becoming more dedicated to political and cultural correctness than to actual training. In what other situation would we pay more to not only get less of what we are paying for but also to get more of what we despise? Yet, that is the decision we often make in higher education. This is far from neutral.

Dorms are not neutral. Headlines illustrate that this environment is far from benign. Drunkenness, partying, drugs and sexual immorality all pervade college housing. Confusion about gender issues will only make this worse in days to come. We can never underestimate the power of influence in these environments. Bad company corrupts good morals (1 Cor. 15:33). We know the importance of holiness. It pleases God and is the way of life (Prov. 3:18). Would we ever want to jeopardize that? The Scripture bemoans Lot’s time (cf. Gen 19:9, 14) in Sodom and Gomorrah for it tormented his soul (2 Pet. 2:8). Why would we ever put our young people there? Do we want to be a stumbling block to those in our care? This is not morally neutral.

Conversations are not neutral. Sometimes we are confident that our young people will withstand the pressures of secular schooling. We may even prepare them to stand for their faith in the classroom. However, the influence of undergraduate education is not merely in the classroom. The sway of individual conversations that happen every day with faculty, staff and one’s fellow students is equally influential if not more powerful. In these interactions, subtle but profound shifts can occur. For example, someone might ask, “Well, do you really think this person can change? They don’t feel like they can.” The moment one accepts this idea, a shift of truth occurs. Truth becomes what one feels as opposed to what the Scripture says. Reality is based upon experience and not upon the Bible. That simultaneously displaces the authority of Scripture. The Bible is now subject to our thinking rather than the other way around. Likewise, sometimes people will say, “Well, isn’t it loving just to accept people the way they are?” Again, when one acknowledges this idea, one has changed the biblical definition of love which is based upon God’s standard and not sinful society (cf. 2 John 5-6). College campuses also appeal to a notion of justice that is far from the reflection of God’s character in holiness (Lev. 19:1; Deut. 10:17-18; 24:16). Faith is not just crushed in the classroom but changed in a thousand micro-conversations that happen every day. At that point, students can still confess Christ, but their faith has definitions of truth, authority, Scripture and various points of theological doctrine that are entirely different from what the Scriptures say. At best, this leaves the student vulnerable to error, if not embedded in a false version of Christianity.

All of this personally impacts a student and those effects are not neutral. University is the transition to adulthood. As such, it has massive ramifications upon the rest of one’s life. A person’s vocation, geographic location and lifestyle are determined in school. We could add on top of that: who they marry, their view on family, and their sense of parenting, each of which is developed in these years. Political philosophy and how one perceives society are also formed. There is a reason that society views college as the place where one’s thinking is completed. This is a transitional moment to that very end. What happens in undergraduate education exerts tremendous weight on the rest of one’s life. A shipwrecked faith can destroy one’s life (1 Tim. 1:19). Sins and mistakes in these four years can be baggage carried into one’s marriage, family, job and life. Furthermore, one may end up with a redefined Christianity, and that not only stays with someone in this life, but into eternity. The apostle John says his joy is watching his children walk in the truth (3 John 4). Few things are as painful as watching a life spent in a lie. Moreover, the accountability for all of that is eternal (Matt. 25:14-30). The results of education are not just for this life but forever. This is anything but neutral.

The resulting impact isn’t neutral, either. No man is an island. As we have seen, university — by design, operation and impact — shapes a person. And universities do not merely shape one person, but many. As such, this impacts the global church. Francis Schaeffer astutely noted that the flow of ideas comes from the academy down to the church. We can observe this. Why does the church embrace postmodernism, leading to the downgrading of the authority of Scripture? Why does the church entertain critical theory, which looks at society in a way contrary to Scripture (cf. Deut. 24:16; Ezek. 18:1-32)? Why does the church use the language of deconstructionism and hermeneutical relativism in saying, “What does this mean to you?” Why has the church shifted the emphasis of the gospel from salvation and sin (1 Cor. 15:1-5) to self-help and the rectification of society?

All of these ideas have been taught in universities, and it was there that people warmed to them. Hence, when these ideas finally confronted the church, the church did not discern through them but accepted them because that is what its members were taught. We know that the church is in crisis, but what we must also know is that the decision about higher education is not unrelated. Rather, it is at the heart of the issue. We have permitted generations to be equipped in such a way as to make this downfall happen.

So, if the classrooms, dorms, conversations and personal impacts of a university are not neutral, what makes us think the decision about where to send our children for school is neutral? Nothing about it is neutral. When we choose a school so that our child can attain prestige or a job, we are equally deciding that we want that institution to shape the way they think and live, ultimately setting a course for their life. This inherently is a theological decision, a discipleship decision, one that involves our God-given responsibility as parents and spiritual leaders, one for which we must give account before God, and thus one that demands our careful thought.

True Christian higher education exists so that we do not have to make an either-or decision. It is not that a student will either have a bad education or face an environment hostile to his or her convictions. Rather, a student can have a good education in an environment that solidifies his or her convictions. This makes financial sense. Why invest so much resource into an education where a vast majority of it is contrary to what you have taught? This makes pragmatic sense. Why have a student waste time in curriculum more about an agenda and less about the actual subject matter? Most importantly, all of this makes theological sense. University, by design, is the place that completes the way an individual thinks. We want our young people to think the way the Bible thinks. We want them to think about the world, society, marriage, family, vocation, church and all of life the way God has revealed from beginning (Gen. 1:1) to end (Rev. 22:21) so that their lives now and forever are worthwhile for them and before God (2 Cor. 5:10).

All of this goes back to truth. An education undergirded by Scripture is consistent with the biblical truth our children have been taught and builds upon it. This kind of education is coherent. Since classes do not contradict or compete with each other, a student’s instruction compounds to give the deepest and richest understanding of one’s life and major. This heightens one’s effectiveness in the world. An education based on biblical truth forms convictions that are needed for one’s personal life, family, vocation, the church and one’s participation in the plan of God. An education based on Scripture makes the most sense.

Deuteronomy 6 reminds us that part of our love for God (Deut. 6:5) is instructing young people in God’s Word (Deut. 6:7). From Israel’s foundation, God stated that a biblical education was crucial for the nation and a powerful demonstration of devotion to God. May we have the greatest urgency in giving our students a holistic education, from beginning to end.

Next, read Dr. Chou’s “The Absolute Necessity Of A Biblical Liberal Arts Degree”: