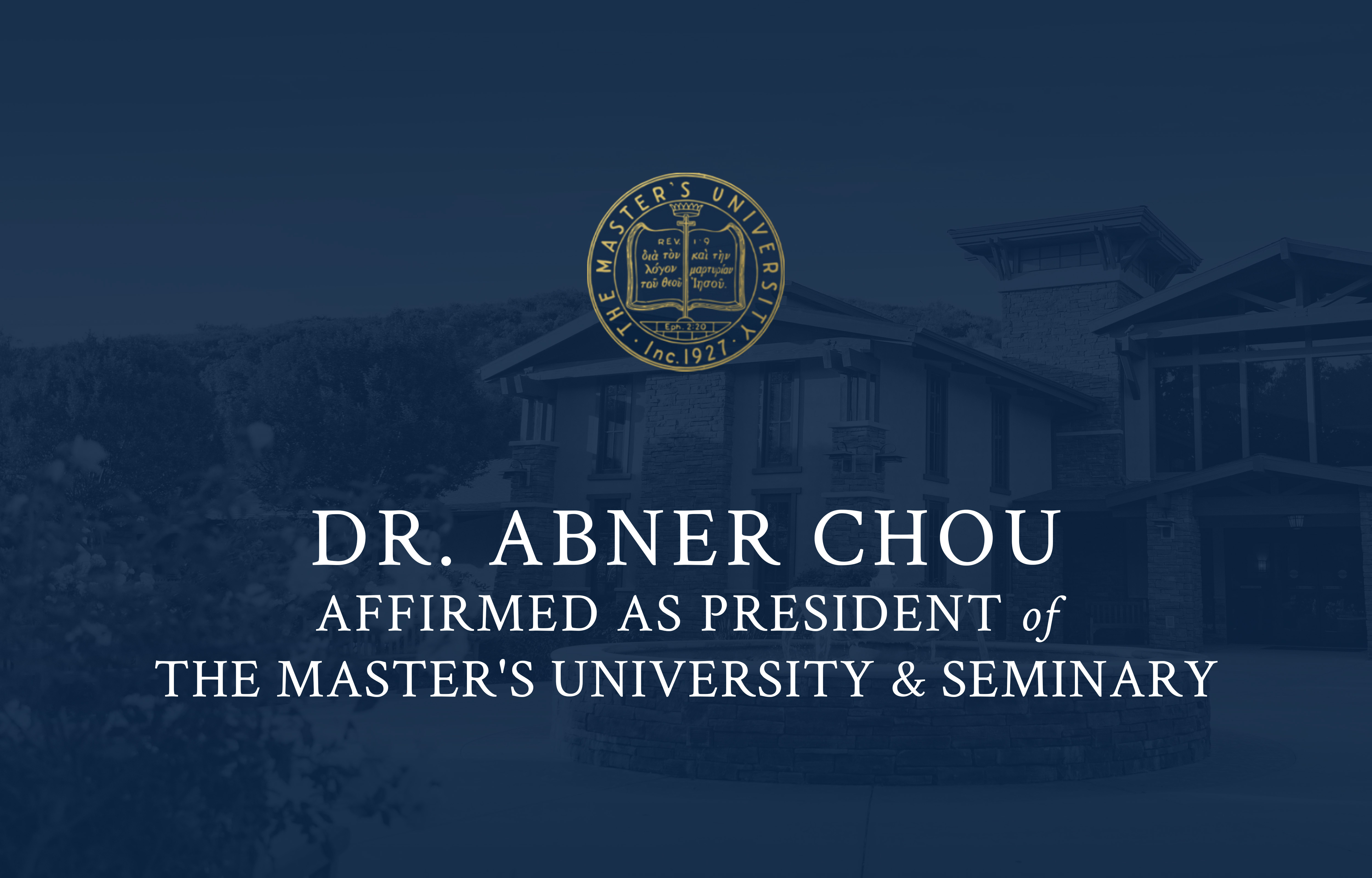 After serving in the position on an interim basis for the past year, Dr. Abner Chou has assumed the role of full-time president of The Master’s University and Seminary.

The board of directors unanimously affirmed Chou as the next president in March, a move that took effect May 6.

Chou — a beloved professor and John F. MacArthur Endowed Fellow — is the school’s fourth president in the past 63 years. He is a graduate of TMU and TMS, and since 2007, he has been a faculty member in TMU’s Department of Biblical Studies.

Over the years, Chou has served the University on committees for strategic planning, faculty advancement, accreditation standards and technology. He has also been crucial in establishing several donor-funded scholarships.

Recently, Chou served as the head translator of the Legacy Standard Bible.

Jonathan Rourke, chairman of the board, believes Chou’s Christian character, academic credentials and history with the University and Seminary make him an ideal fit as president.

“It’s his faithfulness to the stewardship of this ministry and his humility as a servant leader that set him apart as the person to lead the University and Seminary,” Rourke said.

Chou called it “an honor” to steward an institution that has remained committed since 1927 to honoring Christ and subjecting all things to His inerrant Word.

“That commitment drives every aspect of campus life,” Chou said, “from the classroom, to the dorms, to student life activity, to co-curriculars, to how staff interacts with our students. Everything is governed by our commitment to Christ and Scripture.”

Since becoming interim president in 2021, Chou has maintained a close connection with TMU’s student body, continuing to teach classes and meeting with students on Friday afternoons to answer a variety of questions. The monthly Q&A has been labeled “Chat with Chou.”

At TMU, Chou has taught a variety of classes in Bible and theology, including Greek, Hebrew, Old Testament Survey, and Essentials of Christian Thought. He also established and led the five-year B.A./M.Div. program that allows students to graduate with a bachelor’s in biblical studies from TMU and a Master of Divinity from TMS.

In 2017, in recognition of his commitment to academic and theological excellence, Chou became the first and only fully funded research chair at TMU, serving as the John F. MacArthur Endowed Fellow. Chou’s primary charge in this position is to ensure TMU’s doctrinal integrity through influence in research, writing and teaching.

In addition to leading the translation of the Old and New testaments for the Legacy Standard Bible, Chou is the author of numerous publications and is a widely sought-after plenary speaker and guest lecturer at conferences, universities and seminaries.

In all of this, Chou has remained remarkably humble.

“What’s been evident over all his years of service here is his incredible humility,” said Dr. John Stead, TMU’s executive vice president.

Said Rourke, “It’s rare to find someone who has that much ability and responsibility, but also so much humility.”

TMU has also completed numerous campus upgrades in recent years, including renovations of dorms, classrooms, Powell Library and Under the Oaks. Earlier this year, the school announced the purchase of nine properties, expanding its housing capacity to meet record-setting enrollment growth.

The previous two fall semesters have seen TMU welcome new students at levels never before seen on its Newhall, California, campus. Another large class is expected to arrive in fall 2022.