What Can 'Terrible Heads' Tell us About God's Designs? 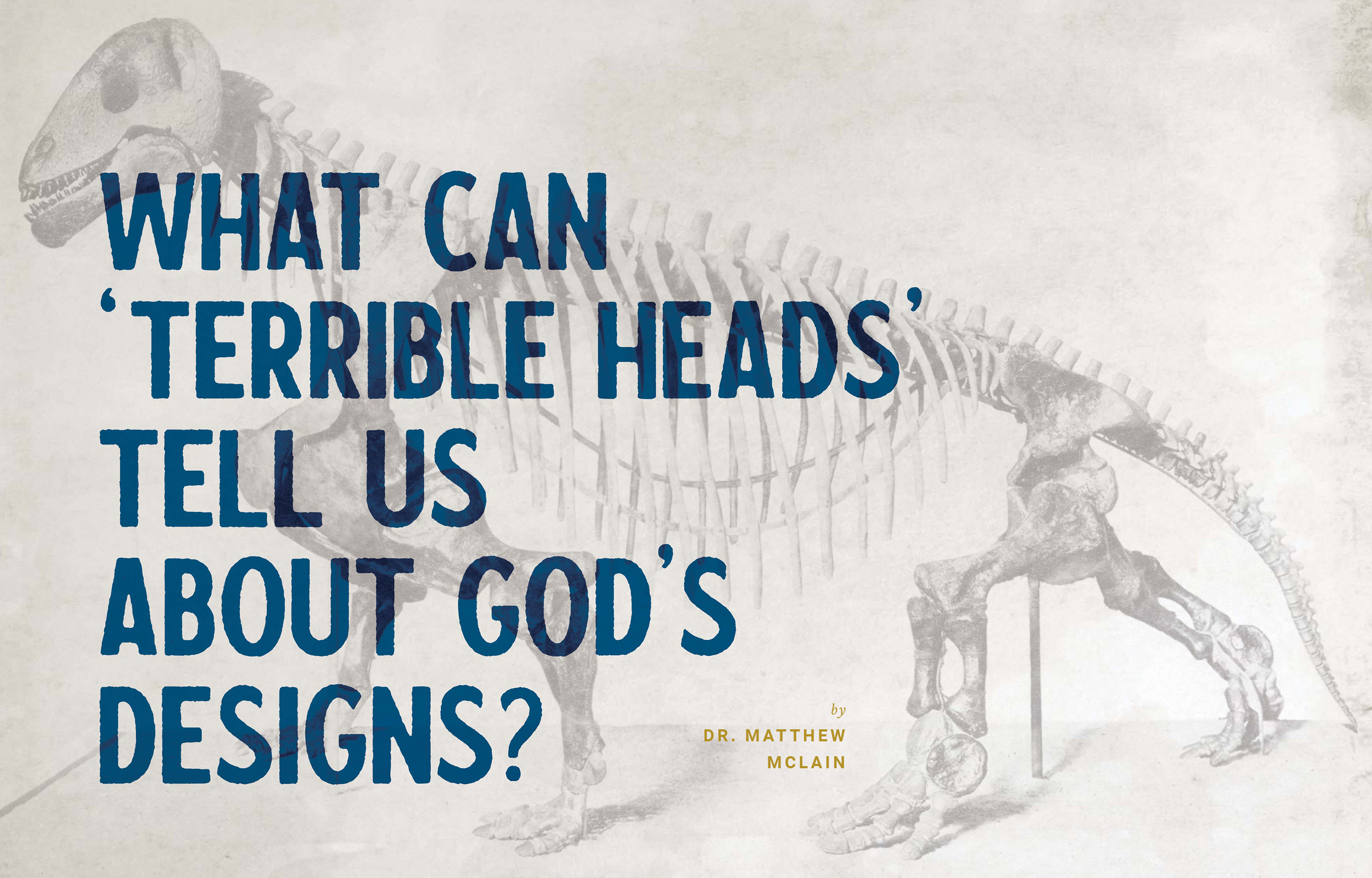 Editor’s Note: This story originally appeared in the November issue of The Mustang Connection magazine.

You’ve heard of dinosaurs, of course. But have you ever heard of a dinocephalian?

Dinosaurs tend to get all of the attention in paleontology, and it’s easy to understand why. They’re amazing creatures — from 80-ton, long-necked sauropods to the ferocious Tyrannosaurus. But they’re not the only captivating creatures God made. In fact, there are thousands of amazing animals in the fossil record that reveal our Creator’s ingenuity in completely unexpected ways. And I want to take a minute to reveal one group to you in hopes that you’ll be astounded by how these surprising marvels put God’s glory on display.

So, if a dinocephalian is not a dinosaur, then what is it?

Dinocephalia means “terrible heads,” which is an apt description if there ever was one. The name fits these creatures well because they have some absolutely bizarre heads. Interestingly, even though the name seems to be a perfect fit, it probably wasn’t chosen for that reason. Paleontologist H.G. Seeley named the group Dinocephalia in 1894 after the animal Dinocephalus, which was probably a reference to its large and scary teeth rather than the bumpy heads we’ll discuss in a moment.

In the evolutionary model, synapsids like the dinocephalians are seen as the ancestors of mammals. The argument is that whales, pigs, dogs and humans are all descendants of synapsids.

As a scientist who stands on the authority of Scripture, I have to disagree. Humans were created from the dust of the ground, separate from the other animals on the sixth day of the Creation Week (Genesis 2:7). Additionally, we know that God created different kinds of animals and plants. As a young Earth creationist, I expect to see multiple created kinds of mammals and synapsids. But we’ll come back to these creation/evolution issues in a moment.

The tapinocephalians are the particularly unusual ones, with a good example being Moschops. Moschops would have been big enough for you to ride: 8-9 feet long and 5 feet tall. It had a huge chest with slightly sprawling forelimbs, so it would have walked around like a bodybuilder. The back sloped down to the less massive hindlimbs and a pretty wimpy tail. However, the most startling feature of *Moschops* was, you guessed it, its head. *Moschops* had extra thick bone on its head making a dome. It almost certainly used this thickened dome to headbutt things, likely other Moschops, similar to the bighorn sheep of today. Not only was its head thick, but its brain and inner ear were not aligned with its snout, which means that it perpetually kept its snout pointing to the ground as it walked around, which was a perfect position for headbutting. A replica of the skull of Estemmenosuchus displayed in the Arizona Museum of Natural History in Mesa, Arizona. Image by the author; background removed by the author.

But the most terrible head of all belongs to my favorite animal of all time: Estemmenosuchus. I included a picture of the skull of Estemmenosuchus because a description just doesn’t do it justice. It has two large bony flanges that point out from the left and right sides of its head, and then it has two antler-looking things (like what you might put on your dog at Christmastime) poking out of the top of its head. Then it has a nose horn on its snout, like when somebody has one of those extravagant desserts (that are given dangerous-sounding names) and then tops it with a tiny cherry. It was a big animal — about the size of a small hippo. So yes, you could definitely ride it.

Dinocephalians like Moschops and Estemmenosuchus surprise us with their peculiar appearances, but in another sense they should not be surprising at all. Everywhere we look in nature there are animals that astound and surprise us. The deep sea is full of fish that produce their own light, sometimes as fishing lures. Lyre birds can copy the sounds of other birds and even human-made objects like chainsaws and cell phones. Tardigrades can survive extreme heat, cold and even the vacuum of space. Even animals that we are very familiar with are dumbfounding when you stop to think about them. Consider deer. Every year, male deer grow giant bony projections out of their heads just to shed them a few months later. That’s wild!

That’s one of the things I want you to see: God’s designs are wild. They’re not crazy. They’re not bad. They’re surprising and unexpected. God puts His glory on display in His creations. He shows off what He can do to make us stop and gawk in wonder. Every child loves watching animals because they are recognizing the wonder of His glory that He built into the appearance and behavior of His creatures.

A lot of people think that science is useful only because of apologetics. But whether there was a creation/evolution debate or not, I would still want to be a paleontologist, because I get to see God’s glory on display in fantastic and amazing ways that I never would have guessed were possible. I love discovering fossils and thereby exposing myself to a new and unexpected display of God’s glory. And even better, I get to expose other people to God’s glory as I share these discoveries with them. Even secular scientists describe feelings of excitement and awe as they look at “what nature has made.” But as Christians, we get to appreciate nature on an even deeper level. We understand that the joy and wonder a person experiences when they view animals, whether they know it or not, is actually a response to the glory of God.

The goofy grin of Moschops and the extravagant crests on Estemmenosuchus are fantastic displays of God’s glory. But the fossils of Moschops and Estemmenosuchus are also reminders of the reality of sin and death. God created all things good, but the creation currently groans because of the curse that was placed upon it when Adam and Eve disobeyed God in the Garden of Eden. God created dinocephalians and the rest of the animals for us to manage and care for, but instead our sin brought about their savageness and extinction. As a paleontologist, I get windows into a lost world full of amazing creations of our Lord, but I also get constant reminders of how terrible sin really is.

Naturalistic evolutionists study dinocephalians and see God’s glory, but they misattribute it to the power of nature or evolution. Naturalistic evolutionists study dinocephalian fossils and are reminded of the brevity of existence and the looming threat of death, but they lack any hope of a future restoration for us and nature. As a Christian paleontologist, I get to experience the same awe and thoughtfulness, but I do so in worship and hope. I get to lead students in studying these creatures and researching how many created kinds there were and how to make sense of their appearance in rock layers. We get to write and publish findings knowing that our work is not in vain, because the Lord made His works in wisdom and the Earth is full of His possessions (Psalm 104:24). And we get to know that these “terrible-headed” dinocephalians, though they are now rock, continue to testify along with the heavens telling us of God’s great glory (Psalm 19:1).