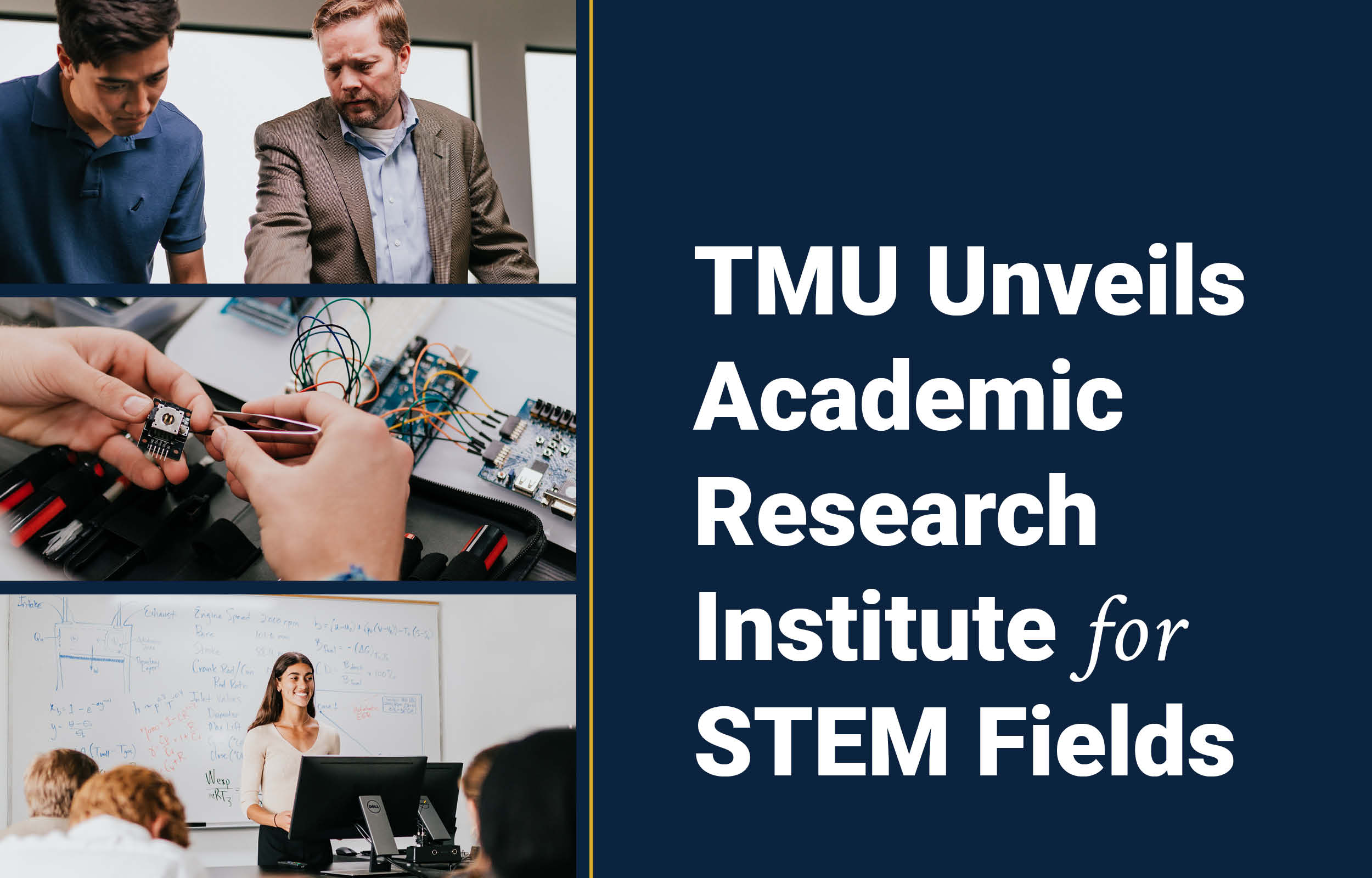 Editor’s Note: This article originally appeared on The Math3ma Institute’s blog on October 30, 2021.

Today we are delighted to announce that The Master’s University is now home to an academic research institute for STEM fields.

The Math3ma Institute is linked to TMU’s engineering and computer science departments and includes faculty members and researchers like myself who work to advance the fields of mathematics, computer science, engineering, machine learning and life sciences, among others.

Fascinated by the beauty, complexity and mysteries in the world around us, we at the institute seek to dive deep into the unknown and share these scientific discoveries with the world in engaging and accessible ways.

As described in our mission statement, our primary goal in these endeavors is to reclaim the glory of God in Christ by acknowledging His supremacy and preeminence as Creator, and in doing so to help students grow closer to the Lord by seeing more clearly His glory, His majesty and His genius in creation.

Over the weekend, we held our first TheoTech conference, which aimed to explore technology from the standpoint of biblical theology. We are also working to launch an expository journal of STEM  in spring 2022. We’re looking forward to these upcoming initiatives, but in this article I’d simply like to introduce myself and share some background on how Math3ma came to be. My name is Tai-Danae Bradley. (It’s nice to meet you!) I am a research mathematician currently based at a large tech company and am deeply honored to join TMU faculty this year as a visiting research professor of mathematics and computer science. In this introductory article, I hope to answer a couple initial questions about our new endeavor. *Why this new initiative? Where did it come from?*

The Math3ma Institute has its origins in a blog I created in 2015 of the same name, Math3ma, containing expository articles on advanced mathematics from an undergraduate to graduate and research levels. Those articles were the result of my attempts to clearly understand and communicate a difficult subject that did not come easy to me. This history ties in closely with the goals and mission of The Math3ma Institute.

As a first-year math graduate student in 2015, I was (and still am) enamored of the ways mathematics is so expertly woven into the world around us. From the forces that hold the tiniest subatomic particles together, to those that describe the sweeping motion of planets and stars, mathematics is strikingly foundational to it all. But I was also aware that the beautiful landmarks of higher mathematics are often inaccessible, being hidden behind a dense fog of lofty speech and technical jargon. To access this knowledge, one must therefore develop keen eyesight that can penetrate through the fog to clearly see the simple ideas and concepts that lie beneath.

As a Christian I also recognize mathematics as a language that God has graciously granted us access to so that we may know Him better through investigations of His work in creation, where His glory is on full display. As a student, I loved the Lord Jesus, and I knew the language of mathematics was a lens through which I could begin to see His majesty in creation more clearly, and yet this language was not my native tongue. So to learn it, I spent much of my time in graduate school training my eyes to see mathematics with clarity. To do this, I began writing short expositions to distill the technical material I was taught in class. Through this slow process of writing, I was forced to think carefully and deeply about what was being written, and this often revealed my misunderstandings and the gaps that needed to be filled. It was in this deliberate time of mental exertion that I could also ask the Lord — the One whose sovereignty reigns over the very subject I was studying — for strength, clarity, focus and self discipline as I strove to give my best efforts to Him. Over the years, I watched these prayers graciously answered as I began to understand the language of mathematics more clearly.

Eventually, I started publicly sharing the articles online. I wanted to help make advanced mathematics accessible to wide audiences so that others could see the ideas clearly, too, so that perhaps they might begin to wonder about the true source of it all — the very One who spoke creation into existence. And this is how Math3ma was born.

Since the blog’s inception, I have discovered that many students around the world felt as I once did — that the math we learn in school is often taught as a dry and lifeless subject that is little more than symbol manipulation and speedy arithmetic. The beauty and simplicity of God’s brilliance and genius in creation is thus buried deep beneath that dense fog of formality and technical speech mentioned above. As a result, those who are initially eager to learn the subject often become discouraged from digging deeper and even from entering the field altogether. These barriers convey the idea that mathematics belongs to a select few and only to them. But as Christians, we know this should not be the case. We know to Whom this knowledge belongs, and moreover that it has been given to us by His grace and for His glory.

And that is why I continued to maintain the blog over the years.

What does “Math3ma” mean?

I chose the title “Math3ma” for its significance in this endeavor. It is a twist on the ancient Greek word μάθημα (máthēma), which means “that which is learned” or “a lesson.” Perhaps unsurprisingly, our English word mathematics is derived from it and quite literally means “relating to máthēma.” But another English word also has origins in máthēma, namely disciple, which simply refers to a learner or student and in the Greek feminine form is given by μαθήτρια (mathétria, Acts 9:36). The word “math3ma” thus serves as a reminder for those who, like me, are students of the Lord Jesus Christ through His Word as well as learners of this knowledge He has graciously given to us.

And that may include you!

A Note to Students

If you are a student at TMU, then you too are a student of the Lord Jesus and a learner of the knowledge He has given to you in your own course of study, whether that’s liberal arts, Biblical studies, business administration, music, engineering or something else.

You may be interested to know that I wasn’t always a fan of mathematics. I struggled with math during middle school and high school and even as an undergraduate student. In fact, I had a strong aversion to the subject until midway through college. (That’s another story for another day!) And yet I persevered through those difficulties and chose to major in physics and math in college, to pursue math in graduate school, and am now building a career around it.

I was able to do so because I saw how God graciously and consistently used my struggles to teach me the importance of trusting in Him in all things, including — and especially — those daily mundane tasks that come with being a student: doing homework, visiting professors’ office hours for help, diligently studying for exams, managing time wisely, and cultivating a strong work ethic, for instance. These tasks felt tedious and even frustrating at times, but I discovered that learning to be faithful stewards of the work God has given us — even that which seems small and ordinary — is a vital part of growth in Christ (1 Corinthians 4:1–2). As a student at TMU, I’m sure you will also have similar opportunities for faithfulness this semester in whatever academic program you are in.

So, it is my prayer that through your faithful obedience to God in the ordinary things, you’ll be able to see His power and ability to use you to do extraordinary things for His kingdom and His glory. And as you hear more about The Math3ma Institute on campus in the weeks and months ahead, know that it will be a witness to you of this truth.

Speaking of The Math3ma Institute, I’ll close by saying that the goals envisioned over the years have now become a reality in ways I never could have imagined; namely, that the institute encompasses fields throughout all of STEM —engineering, computer science, life sciences, machine learning and more. Housing the Institute at The Master’s University further allows us to create a place for students, faculty and researchers to join together in the stewardship of the knowledge of the truth that God has given to us by His common and special grace — a place where we can together find joy in the absolute wonder of His creation (1 Timothy 2:1–4). For this, I am deeply grateful to our Lord and look forward to ways in which we can continue to magnify His great name.

For more information about The Math3ma Institute, visit our website at www.math3ma.institute.