TMU To Induct Trio Into Athletics Hall of Honor 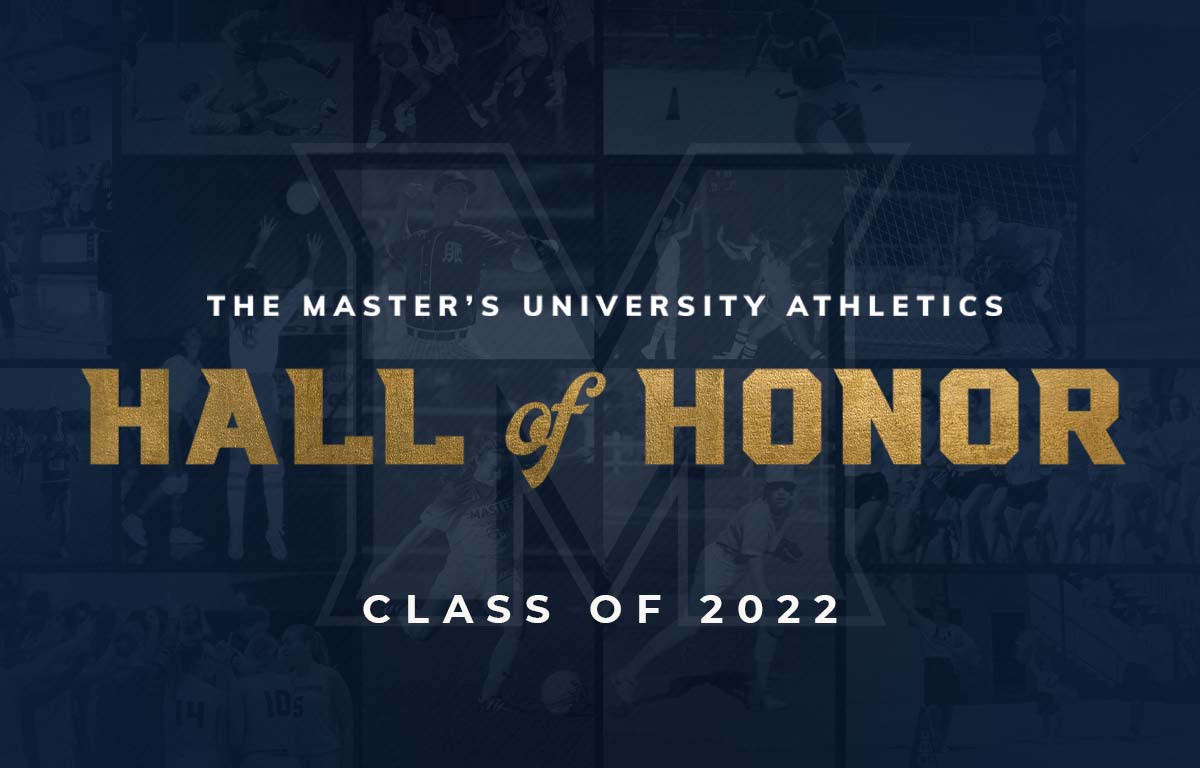 One of TMU’s best three-point shooters of all time.

One of the school’s most prolific goal scorers.

It would be an understatement to say The Master’s University will induct an impressive trio into the school’s Athletics Hall of Honor on Saturday.

TMU will celebrate the Hall of Honor’s Class of 2022 during an afternoon ceremony Saturday before continuing to honor them between games of TMU’s basketball double-header against Westmont College.

When it comes time to read off the inductees’ accomplishments, there will be plenty to say. For Perperoglou, Saturday will mark a return to the campus where she made national headlines in 2000. From the outside looking in, many people couldn’t understand why she transferred from NCAA Division 1 UC Santa Barbara — where she had been a three-time conference player of the year — to an NAIA school before her senior year.

For Perperoglou, the reason was clear.

“She was like, ‘I want to be around likeminded people who love Jesus. I want to study the Bible,’” recalls Ken Sugarman, TMU’s women’s basketball head coach from 1995 to 2008. “I think what she enjoyed most about the school were her Bible classes. She’d say, ‘I can’t believe I get to sit in class and pray and study the Bible.’”

On the court, Perperoglou averaged 17.6 points and 9.3 rebounds, leading the Mustangs to an overall record of 26-3. At the time, it marked the team’s best-ever season, but that wasn’t the only groundbreaking achievement. Perperoglou became the program’s first NAIA First-Team All-American. She was then drafted 23rd overall in the 2001 WNBA Draft, going on to play eight seasons in the WNBA and winning a league title in 2005 as a member of the Sacramento Monarchs.

Perperoglou also played professionally in Greece where she met her husband, Stratos. The couple now lives in Kansas City, Missouri, where Stratos is enrolled at The Expositors Seminary. Erin says her “heart is at home” during this stage of life; she homeschools the family’s three children, Abigail, Nikolaos, and Efstratios Timothy.

“She’s a one-of-a-kind talent who’s also a one-of-a-kind person,” Sugarman says. “She’s genuine and she has a real love for Jesus and for others. If she wasn’t so selfless, she’d probably have broken a whole bunch of single-season records at Master’s. But that’s just not who she was as a person. She was selfless and giving by nature. Her talent was undeniable. In 2005, Ryan Zamroz arrived at The Master’s University as a member of legendary head coach Bill Oates’ final recruiting class. Early on, one of Oates’ assistant coaches saw significant promise in the 6-foot-3 freshman guard from Pennsylvania.

“He was a little wet behind the ears, but he was just as good if not better than most of the guys who were there,” says John Mosley. “I knew he was going to have a hall-of-fame career.”

That proved to be true. Over four seasons in which he never missed a game, Zamroz put together one of the finest careers in program history. He was twice named an NAIA All-American, earning second-team honors in 2008. In each of his final two seasons, he led TMU in scoring, tossing in a career-high 18.9 points per game as a senior.

For his career, Zamroz finished with 1,862 points, seventh most in TMU history, and 222 three-pointers, the program’s fourth-best mark. What stood out more was Zamroz’s humility and love for Christ. “He embodied what Master’s is all about,” Mosley says.

Zamroz graduated from TMU in 2009 with a degree in business administration. He then enjoyed a successful, six-year pro career that took him to Australia, England, Sweden, France and Spain. He currently lives in Valencia, California, with his wife, Stacy, and their three children: Vera (8), Deacon (7) and Freeman (5). Zamroz works as the director of TMU’s Office of Development. At TMU, Emily Pedersen (Bruton) was no stranger to finding the back of the net. The forward from San Leandro, California, ranks second in program history for career goals (44) and points (100). But what was even more memorable than her ability to score was her impact in helping change the direction of the women’s soccer program.

After enduring one of the team’s most challenging seasons as a freshman in 2007, Pedersen was the catalyst for a Master’s squad that won 45 games over the next three years, making its first-ever NAIA National Tournament appearance in 2010. “We were able to get on the map as a program,” says Curtis Lewis, TMU’s women’s soccer head coach since 2007, “and she was a huge part of us getting there.”

At TMU, Pedersen also grew in her walk with Christ. “She turned into a leader on and off the field. And through it all, she wanted her greatest desire to be honoring the Lord,” Lewis says. Pedersen’s life has continued to reflect that desire since graduating from TMU in 2010 with a degree in kinesiology and physical education. She went on to earn a doctorate of physical therapy at Cal State Northridge. She and her husband, Mark, live in Ukiah, California, where she works as a physical therapist.

For a complete list of TMU’s Hall of Honor members, visit GoMustangs.com/hall-of-honor.