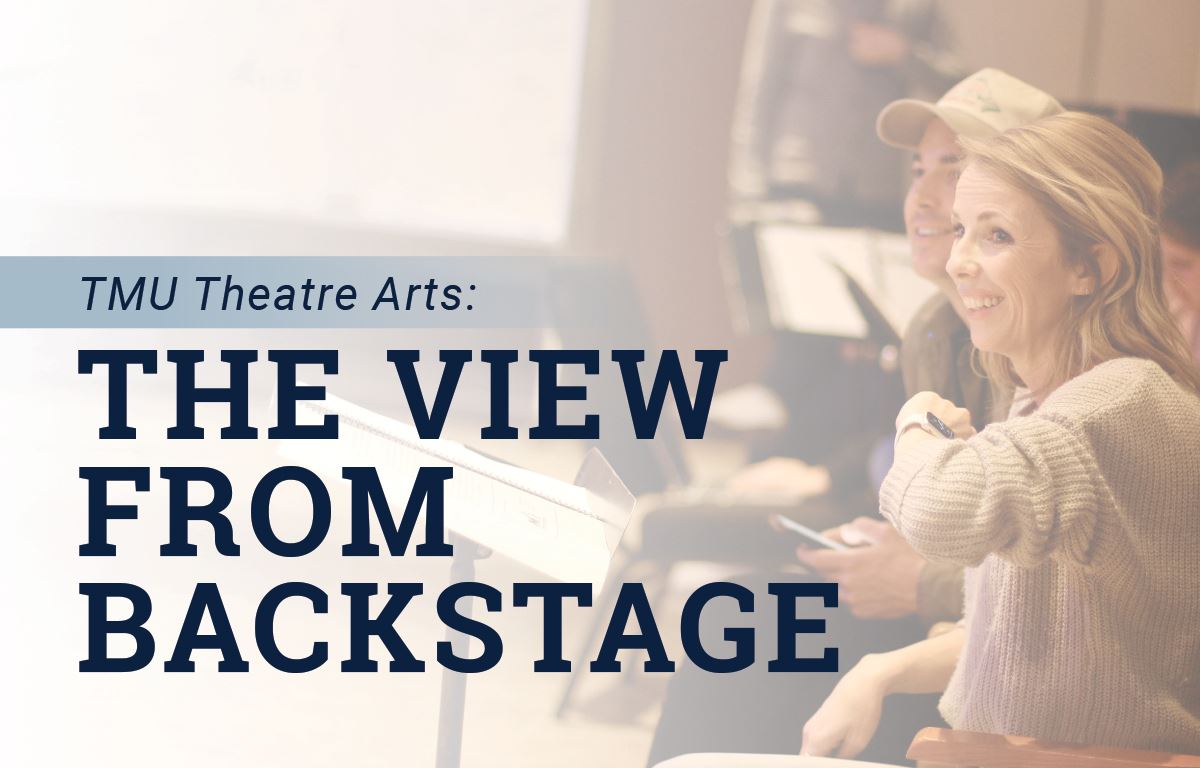 For millennia, theater has served as the stage for some of humanity’s greatest storytelling. TMU’s Theatre Arts program believes in giving well-told stories as a gift to the audience in echo of God’s creative nature. Though the specific narrative changes from semester to semester, each production embodies this same belief.

Of course, putting this belief into action requires a lot of hard, messy work. Behind the scenes, actors are rehearsing lines and hunting around for missing props. Students responsible for wardrobe and makeup are in a frenzy. The sound and lighting folks are reviewing the script. And so much of this work that goes into creating a show is hidden from the audience.

Moriah Pringle, a senior Communication major, has been involved in the Theatre Arts program since her first semester. Though she was part of the ensemble for “The Secret Garden,” she more often served in backstage and front-of-house roles. She has done just about everything during her time in the program, from managing the box office to sorting screws on teardown days.

In a more visible role is Joshua, a sophomore studying Business Management and Pre-Law. He wanted to branch out after reaching Master’s, and upon seeing his first Theatre Arts production, he decided to audition for crew. Instead, he was placed in cast. This unexpected turn launched his love for theater.

For everyone in the program, the work of a production begins long before showtime. Beyond the many rehearsals, there are also the strenuous build days. Moriah recalls the experience: “For three days, we build the set from the ground up. We’re working together, all crammed in the Music Recital Hall. It’s a ton of work and long days, but it’s the best time. You’re working side by side, chatting about people’s lives. In a real way, I think work bonds people together.”

After all the work of preparation, production week finally comes.

As the crowd quiets down in anticipation of the show, something goes on inside the actors. Joshua describes it as the “climb to the top of a rollercoaster. It’s slow, and you know it’s coming—but you don’t know if it’s fear, anxiety, or what you had for lunch.”

“You just go; it’s this awesome rush of adrenaline.”

As the actors perform their well-practiced roles, an equally well-practiced flurry of activity carries on backstage. Upwards of fifty people cluster out of sight, ready help with thirty-second wardrobe changes or to put necessary props in the performers’ hands. Meanwhile, in the tech booth, another team bears the invisible responsibility of making everything sound smooth.

At the end of the show, the curtains close; the actors perform their bows, and everyone on the team marvels at the fact of having accomplished something wonderful.

Though the performance itself is a joy to put on, students in the program are also grateful for the skills they learn, which they can take with them into life after college. As Josh says, what they learn “translates into everyday life.”

One of Josh’s biggest takeaways has come from rehearsals; in life, like in acting, mistakes are a necessary part of growth. Josh has also been pushed by the program to refine his time management skills. After all, balancing a student schedule is hard enough on its own, and Theatre Arts is a significant commitment.

For Moriah, her greatest lesson has been learning to delight in humility: “When I first came into the program, I had a deep desire to feel important and needed and validated.” TMU’s Theatre Arts program, however, is designed around humble people working together unpretentiously to worship God by telling a great story. Self-preoccupation misses the point.

“It happened every semester in a different way,” Moriah remembers, “where I would hit that moment of remembering that it’s not about me—it’s about Him . . . That’s when serving starts.”

As Moriah looks back on her years in the program, she recalls something that the program director said: “Tricia Hulet talks about how plays are an imperfect mirror to life. I think the experience of being in theater is also a mirror to life, in some ways. You learn a lot of life lessons in an enclosed space; you can make mistakes and learn and grow, and then you can go out into the world a better person.”

For more information about the Theatre Arts program, see this page.