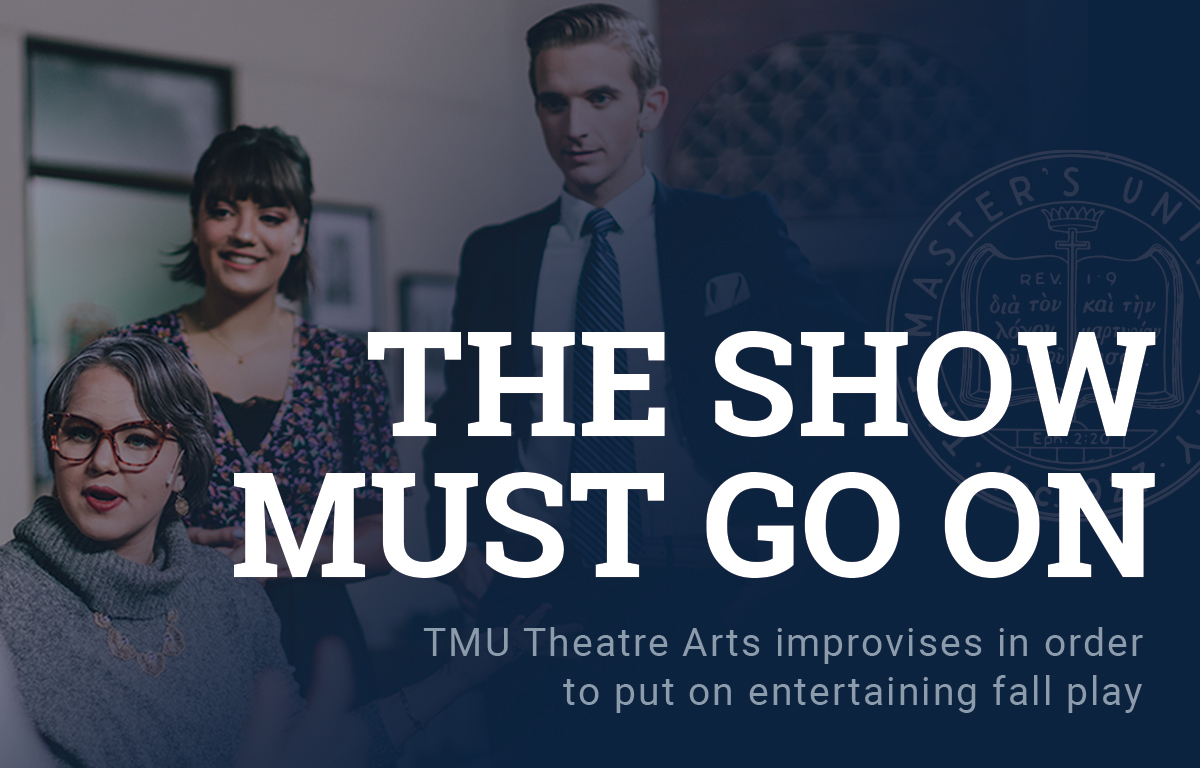 There’s a tradition inside the Theatre Arts program at The Master’s University. Every semester, as cast and crew prepare to deliver another performance, they gather together to exchange testimonies of how they came to know Jesus Christ.

After a student shares, Director Tricia Hulet opens the floor for questions. The inquiries range from funny and ridiculous, to deep and thoughtful. Many explore the presenter’s love for God and others.

The idea, Hulet says, is to disrupt preconceived notions about those in the group and recognize that God brought them all to the same place of seeing their desperate need of Him and calling out for forgiveness.

“They’re spending all semester pretending to be other people,” Hulet says of her cast. “We feel like we can’t work together unless we truly know one another.”

This fall’s production of “Beau Jest” also revealed something about the true character of the department as a whole. Facing unique challenges during an unprecedented semester, Theatre Arts proved to be a group of people so passionate about storytelling, so set on honoring the Lord through art, that it was willing to adapt, persevere and toil in order to accomplish those goals.

Due to COVID-19 precautions, Master’s was unable to host live performances, a development that interrupted a more-than-decade-long run of entertaining large crowds with “Fiddler on the Roof,” “The Secret Garden,” and other shows.

Instead, Hulet had to pivot to an online format. TMU broadcast six showings of “Beau Jest” on the video-hosting platform Vimeo, with virtual theatergoers buying tickets and receiving a video link and e-program via email. The setup lacked the usual buzz and energy embedded into a live show, but it proved to be a smashing success, nonetheless. Hundreds of people tuned in between Oct. 30 and Nov. 7, some watching from as far away as South Africa and the Philippines.

The production required a heavy dose of flexibility — a skill TMU students learned in March when they traveled home to finish the semester due to the coronavirus. The sudden change had forced Theatre Arts to cancel “She Loves Me,” the musical it had been rehearsing all term. Hulet urged her cast to retain their choreography and lines over the summer in hopes of reviving the show this fall. It wasn’t to be.

Hulet first investigated streaming the show online, but the broadcasting license was unavailable. As a new semester approached, she shifted her focus to “Beau Jest,” the comedic tale of a Jewish woman so burdened by a desire to please her parents that she hires an actor to play a boyfriend they’ll approve of.

Hulet secured those streaming rights, and the show was off and running — with a number of precautions. First, instead of crowding into the Music Recital Hall for auditions, students scheduled times to drop by and display their skills.

One of those hopefuls was Joshua McDonald, a junior business major who’d been cast as a lead in “She Loves Me.”

“‘She Loves Me’ was one of the first shows I ever saw as a kid,” McDonald says. “I got a lead, and that was huge. And then putting all the work in, seeing everybody work tirelessly to give an awesome performance and never actually getting to put that out there was hard. I mean, we all liked the show. We all thought it was good. But we’ll never actually know what the final evaluation would have been.”

McDonald earned another lead in “Beau Jest,” this time as Bob Schroeder, the likable, quick-thinking actor who offers his services as a stand-in boyfriend. McDonald’s counterpart was Arianna Sonnenburg. The junior music major brought plenty of energy and warmth to the character of Sarah Goldman, a woman who gradually learns to stand up to her parents’ expectations.

The duo’s roles were groundbreaking if for no other reason than no leading man or woman had ever performed a show quite like this at TMU.

One of the most noticeable challenges came in practice. Cast members wore masks for each practice run, only showing their full faces for dress rehearsals and recordings. On-stage chemistry was sometimes hard to come by.

“It’s funny how much a performance differs based on the lower half of your face. A lot of the show is reacting to what the other actors are giving you,” McDonald says. “Some nights were better than others. Some nights felt kind of stilted, like the lines are there, the blocking is there, but the story isn’t quite there. So we had to overcome the storytelling aspect, getting comfortable with the masks, so that when we took the masks off and began filming, it was one cohesive show and didn’t feel awkward.”

Another anomaly came as the cast prepared to record the show for the first time. Generally, a student-led team of hair and makeup artists would transform the cast into remarkable characters of another era. This time, however, that hair-and-makeup team could only demonstrate. Due to virus precautions, the cast was on its own.

The task was harder for some than others.

“I had to put on my own fake eyelashes, which was very difficult,” Sonnenburg says. “But I ended up getting better and better each night. And the last night, I put them on within like four minutes, and everyone was so proud of me. It was a celebratory time for all involved.”

Even the recorded performances — free of masks and buoyed by a noticeable energy — didn’t feel totally normal. “Beau Jest” is meant to be performed in front of an uncredited but vital cast member: the crowd.

“Live theater depends on it so much,” Hulet says, “and knowing that was never going to be there, the students had to depend on their training and trust that the story they were telling was good. They had to trust the writing, the direction, their interaction with each other, their preparation.”

In the end, all of the safeguards that went into making the show a reality wore on the cast and crew. But because each person won their personal battles for joy and thankfulness, the overarching morale never waned.

It helped that the show’s production crew packaged the performance into a professional and well-received final product — from the props, to the set, to live sound mixing.

As far as video, Hulet leaned heavily on Assistant Director Seth Bowling and on student Katie Vanderkooi. A senior communication major with an emphasis in cinema and digital arts, Vanderkooi was tasked with leading the show’s video production team. She worked with two camera operators (there was also one stationary, wide-angle camera) to plan and execute the shots that would be used in the show.

During recording, Vanderkooi played the role of quarterback. She tracked all three cameras on a monitor inside the Recital Hall’s foyer, live-switching between shots and asking one team member to zoom on this, another to focus on that.

The show — performed in theater format — wasn’t edited together after the fact, making Vanderkooi’s choices all the more crucial. Ultimately, Hulet selected the fourth and final time her team recorded the show as the one for release.

“I was definitely nervous because I have never live-switched in my life,” Vanderkooi says. “So that first night, I was like, ‘I don’t really know what I’m doing, we’ll just see what happens.’”

In reality, she aced it.

“What she had to do and learn was extraordinary,” Hulet says.

The same could be said of a resilient cast and crew.

“Each time we got to be on that set, every time we made it through an entire run, the overwhelming attitude was gratefulness from them, and it was frequently spoken and cheered and praised. We gave thanks to the Lord in our corporate prayers before and after each rehearsal and taping,” Hulet says. “They were grateful. They bore with what they were asked to do with grace beyond their years. And I’m grateful for that. It was worth their personal fight.”

To learn more about Theatre Arts at TMU, [click here](https://www.masters.edu/theatre-arts).