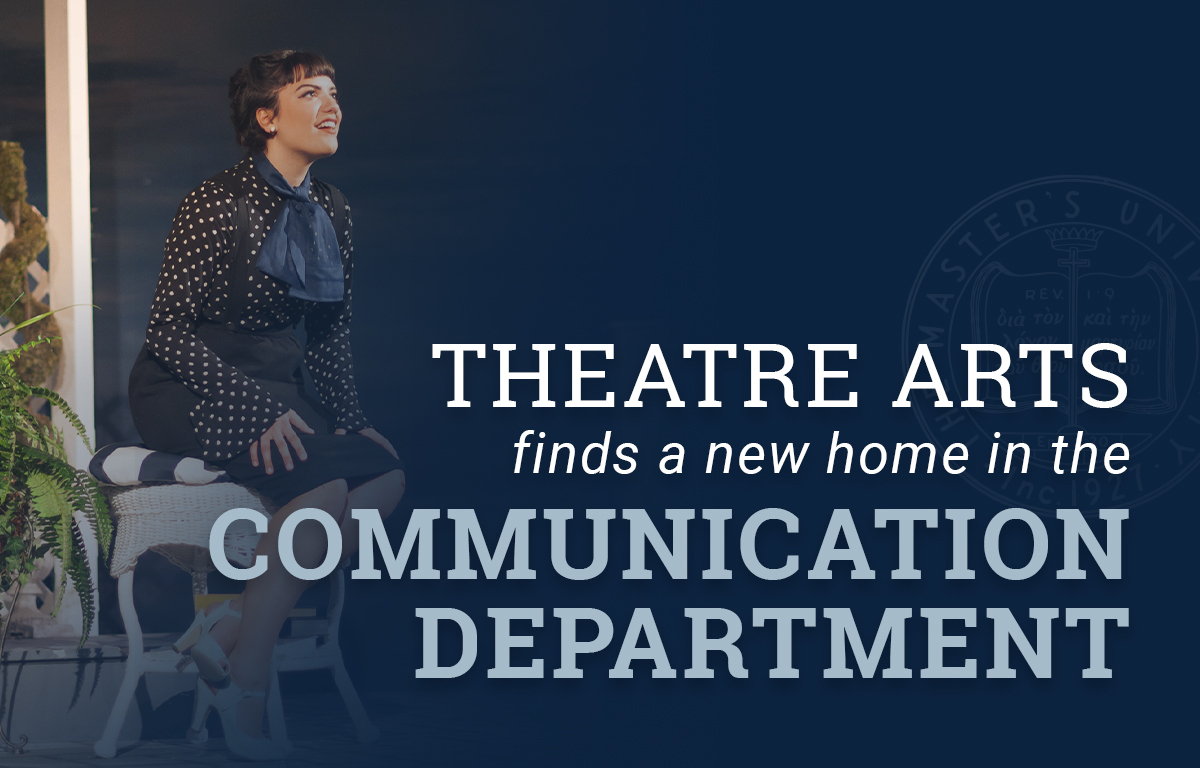 After more than a decade under the umbrella of the music department, The Master’s University Theatre Arts program has a new home.

The program, open to students from any major and responsible for numerous entertaining plays and musicals over the years, has moved into the Department of Communication. And everyone involved in the transition is excited about the new opportunities this creates.

For the past 13 years, Tricia Hulet (director of TMU’s Theatre Arts program) and Dr. Paul Plew (dean of the School of Music) have developed a close partnership. “Dr. Plew cared about Theatre Arts and wanted to see it succeed, and so he let me run with it,” Hulet says. “And because he and I respected each other and loved each other’s programs, it worked.”

TMU Theatre Arts has thrived since its revival in 2008, and the bridges built with the music department have allowed for a wonderful array of musicals and opera scenes.

In recent years, the growth of TMU’s Cinema & Digital Arts program has also opened the door for collaboration. Notably, “The Man from Nowhere,” TMU’s first-ever feature-length film, offered unprecedented opportunities for students interested in acting and costuming — students who have typically relied on Theatre Arts as an outlet for their creativity.

Now, the two programs will be housed in the same department, and Dr. Bob Dickson believes that’s a win.

“Cinema & Digital Arts and Theatre Arts students share some similar interests, obviously,” says Dickson, chair of TMU’s communication department. “Over the years, we’ve seen that overlap growing. Housing both areas of study under the same departmental umbrella should open even more doors for collaboration, and we are all excited about that.”

As a co-curricular program, Theatre Arts is open to students in any degree track. However, as the program changes departments, a new opportunity is being investigated: a Theatre Arts emphasis within the communication degree program.

“As the program has grown, the students have been really eager about the possibility of an academic offering,” Hulet says. “I would love to teach students hands-on in that way — start to finish, how to cast, direct, costume, and produce. They do that on the film side of things, but it’s a whole different ballgame when it’s live theater, so I’d love to play with that.”

Hulet is also excited about the possibility of seeing smaller, student-led theater productions put on throughout the semester. “We could have things like one-act student shows Under the Oaks,” says Hulet. She loves the idea of student-written, student-produced performances becoming normal events around campus (though the big, classic productions every semester won’t be going anywhere!).

In the meantime, students continue to receive either theatre arts or theatre production credit on their transcripts for participation in Hulet’s program. This is immensely valuable for students hoping to go on to further education or work in theater.

“In the theater world, they care about hands-on experience,” Hulet says. “So even without an emphasis or a major, for the last 13 years we’ve been taking care of that for the students. And we still are right now. So even as we move toward that possible emphasis, being able to have credit is really fun. But now it’ll just be underneath and within the communication track.”

Something that hasn’t changed: the program’s enviable geography.

“We’re uniquely positioned — just like with Cinema & Digital Arts — because we are in the L.A. area,” Hulet says. “A lot of people want to be part of the industry. But because we’re committed to the authority and sufficiency of Scripture in all things, our students want to be developed in a biblical worldview and a philosophy that honors Christ, instead of just selling out. We have a really unique opportunity to do that, and to do it well.”

Indeed, anyone who has participated in TMU’s Theatre Arts program knows that it emphasizes far more than memorizing lines and rehearsing scenes. Hulet spends time teaching students how to view art as believers and how to put on a production to the glory of God.

And, even though the program has a new home, its focus remains the same.

“We talk a lot about the process being as important as the product,” Hulet says, “because a lot of people care about one or the other. Some people care a lot about having this beautiful, excellent product, but the process looks just like the world. And then, what does it matter? A lot of people can make a beautiful product. But if we’re not biblical — if you’re yelling at people backstage and being catty — then you’ve totally burnt your platform.”