The Art of Stage Combat 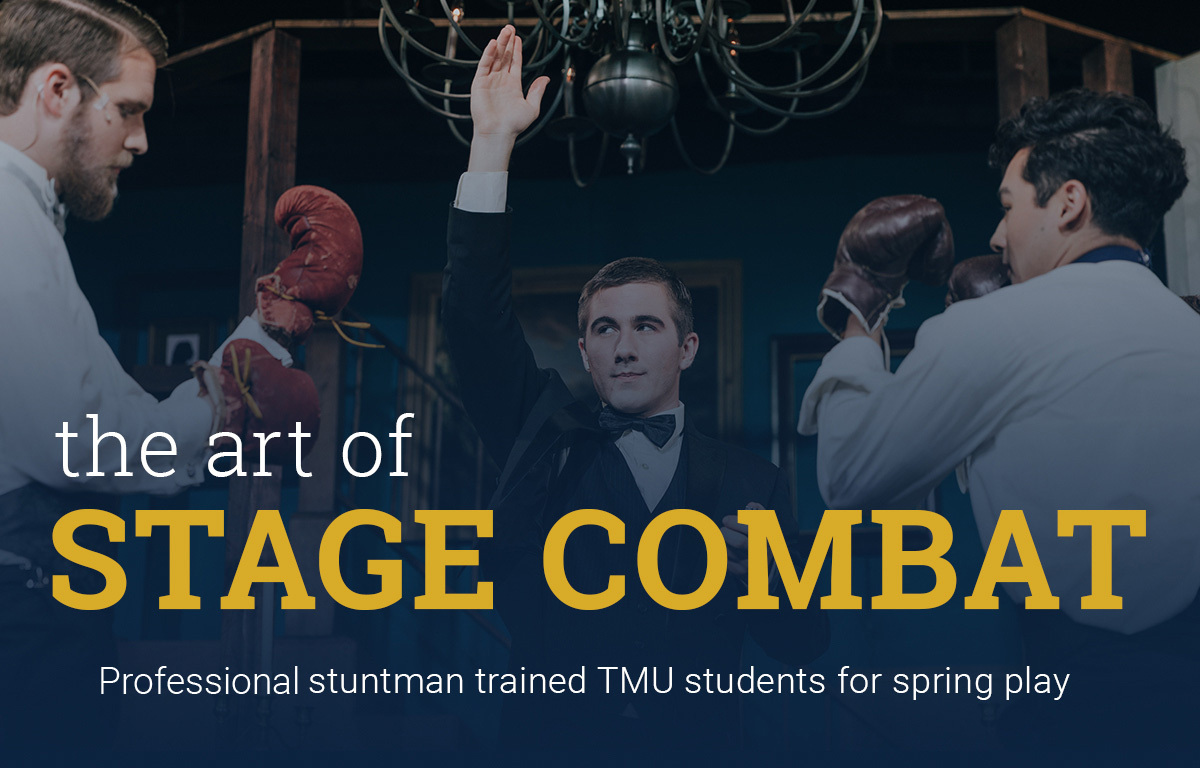 The star of TMU Theatre Arts’ spring play was an eccentric millionaire who, in one scene, hosts a boxing match in his living room.

So, she called in a favor, asking stuntman Kevin Derr to help with choreography.

Derr has worked as a stuntman or stunt coordinator on more than 200 movies and TV series, including “Dunkirk,” “Iron Man,” and “The Dark Knight Rises.”

In February, he attended one of TMU’s practices, training students on how to position themselves, how to throw believable – but ultimately errant — punches, and how to react as if they’d been on the receiving end of a jarring right hook.

“His professionalism, his willingness to tell them how things work in the industry and all the training they got in the mechanics of it were a huge blessing,” said Hulet, who met Derr at church more than a decade ago. “Kevin is also a genuine follower of Christ. His character and personality and demeanor were pleasant for the students as well.”

Hulet gave Derr and TMU Assistant Director Seth Bowling free rein over choreographing the handful of combat scenes in “The Happiest Millionaire,” a story about a wealthy, fun-loving man who must cope with his children getting older and leaving home.

Derr took the lead on scenes that involved boxing. He showed cast members the mechanics of a proper jab and uppercut. Just as importantly, he demonstrated how to react — in a convincing and safe way — to being “punched.” The timing had to be spot-on.

“You’re watching that other person’s fist and then at the exact moment it crosses your face you have to react so that you sell it to the audience,” says Bowling, a TMU grad who holds four credits on IMDB for stunts. “If you go a fraction too early or a fraction too late, the audience can tell it’s a gag.”

Senior Josh Hilton had no experience with stage combat before performing as Anthony J. Drexel Biddle, the show’s title character.

He says he was excited to work with Derr but didn’t immediately understand the professional’s methods. The first time Hilton watched another cast member throw a punch under Derr’s direction, Hilton didn’t think it looked realistic. But Derr used his iPhone to capture the scene from the intended angle.

“When he showed me the video, I was like, ‘Wow, that actually worked really well,’” Hilton said. “Things like punching past the person’s face to give the allusion of making contact seemed odd at first. But for (Derr), it’s a very systematic thing. He knows the steps he needs to take to make it look natural. Seeing him in his element was really cool.”