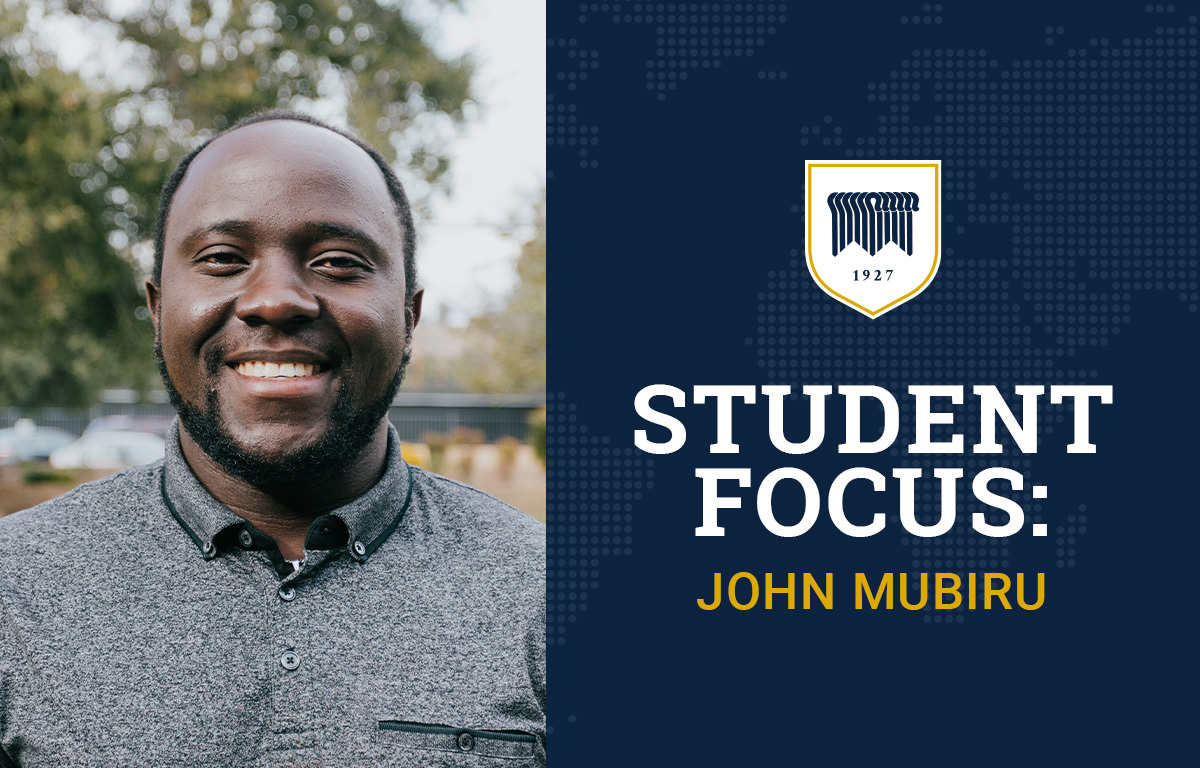 Editor’s Note: This story originally appeared in the January issue of The Mustang Connection magazine.

In Johnson Mubiru’s mind, he was a Christian. He had been baptized as a baby. He knew how to pray to Mary. What more was there to Christianity than that, he thought.

But the missionaries in Mubiru’s village in Uganda – Shannon and Danielle Hurley – viewed Christianity as something very different. And the Lord used their ministry to open Mubiru’s eyes to see that salvation comes through faith in Christ alone, as Scripture teaches.

Since then, Mubiru has developed a zeal to share this message with others. He is now nearing the completion of the five-year Bachelor of Arts and Master of Divinity cooperative program through The Master’s University and Seminary, where faithful professors have built on the foundation laid by the Hurleys’ ministry. When Mubiru graduates, he hopes to return to Uganda to help train pastors who will spread the gospel throughout his home country.

“Uganda needs more churches that are committed to the sufficiency and authority of Scripture,” Mubiru says. “There’s a big opportunity to be a witness.”

Graduating from seminary is a noteworthy achievement under any circumstance. But for Mubiru, the prospect is particularly inspiring.

Mubiru grew up in rural Uganda, one of 11 siblings in a family that subsisted on agriculture. When he was a teenager, he dropped out of school, left home and began to live on his own.

“I wanted to be my own man,” Mubiru says. “I pursued the world as much as I could, without anybody interfering with my life.”

At the time, he says he “didn’t care about anybody.” But he did care about soccer. And there was one family in the village that had plenty of soccer balls: the Hurleys.

Shannon and Danielle, graduates of TMU, founded Sufficiency of Scripture Ministries in Uganda in 2002. They moved the ministry to Kubamitwe village seven years later. But their message wasn’t something Mubiru was initially interested in; he already thought of himself as a Christian.

“The first person to share the gospel with me was Anthony Basaba, who works with Shannon and is also a TMU graduate,” Mubiru says. “He tried to show me that salvation does not come through praying to Mary or through dead saints; salvation is through the Lord Jesus Christ alone. He talked about being ‘born again.’ I hated that term. It sounded like one of the stupidest things I’d ever heard.”

Still, Mubiru wanted a soccer ball. He asked Basaba if he could have one, and the answer was “yes” — if Mubiru wrote a letter and brought it to the church meeting in the Hurleys’ living room. So Mubiru did. But he came away from the meeting with something much more important: a Bible.

“That opened up conversations,” Mubiru says. “I started coming by to play soccer with some of the young men who were there. Of course, their lives were different. They loved the Lord. They respected people. I didn’t do either of those things.”

Then Mubiru attended a pastors conference, where he heard Shannon preach on Romans 1-4. Hearing clearly from Scripture how no one is righteous, Mubiru realized for the first time that he really wasn’t a Christian.

“I started reading the Bible they gave me,” Mubiru says, “and I started praying, ‘God, please, I need You to save me.’”

Mubiru started studying the Gospel of Matthew with Basaba and attending the Hurleys’ church. He began to see the person of Jesus and the saving work He had accomplished. After about a year, Mubiru remembers saying to Basaba, “I need to be baptized.”

His favorite verse came to be Acts 4:12: “And there is salvation in no one else, for there is no other name under heaven that has been given among men by which we must be saved” (LSB).

Shannon Hurley remembers going by Mubiru’s hut and seeing “in Christ alone” freshly written on the door. But Mubiru didn’t live there much longer. Instead, he went to live with the Hurleys, who helped him learn English so he could return to school.

For Mubiru, the prospect of resuming his education was both “fun and scary.” It meant being an 18-year-old among 13-year-olds. But as he grew in his faith and sought the Lord, his desire to make Scripture known to others grew, too. And he felt that in order to minister most effectively, he needed an education.

So, Mubiru began attending a public boarding school to receive the six years of secondary education he had missed. In Shannon Hurley’s words, Mubiru soon became a “star student.” And besides the academics, the school also proved to be a great context for evangelism.

During his time in secondary school, Mubiru realized that he wanted to go into full-time ministry.

Through the process, Mubiru realized he desired to be in full-time ministry. So when he finished secondary school, he looked for an institution where he could be equipped more thoroughly.

“We started to see that this guy was radical for Christ,” Hurley says. “So we worked it out that he could go to The Master’s University and then come back here to Uganda to make an impact.”

In fall 2017, Mubiru traveled from Uganda to Santa Clarita to attend TMU. There, he enrolled in the five-year Bachelor of Arts and Master of Divinity cooperative program.

Mubiru, center, with the Hurleys at Los Angeles International Airport on his first day in the U.S.

“It’s been crazy tough,” he says of the program’s rigorous pace. “But I’m glad I’ve done it.”

Due to the unprecedented nature of 2020, Mubiru’s five-year plan has turned into a six-year plan; he’s on track to graduate in 2023. This semester will mark the end of his classes at TMU, which means leaving behind professors he has grown close to.

Mubiru, likewise, has become dear to the TMU community. As Varner observes, “Really, how can you not love Johnson Mubiru? He is genuine. He is fervent for the Lord. I love having him in my classes.”

Mubiru still plans to return to Uganda after finishing school. He believes the country needs faithful teachers of Scripture, and he hopes to pass along the Bible-exalting education he has received.

“One of the things I appreciate is how seriously all of my professors take the Word of God,” Mubiru says. “They trust that the Bible is God’s Word. At both TMU and TMS, my professors love the Lord, and I’ve seen how they care about us. Being here has been a wonderful experience.”