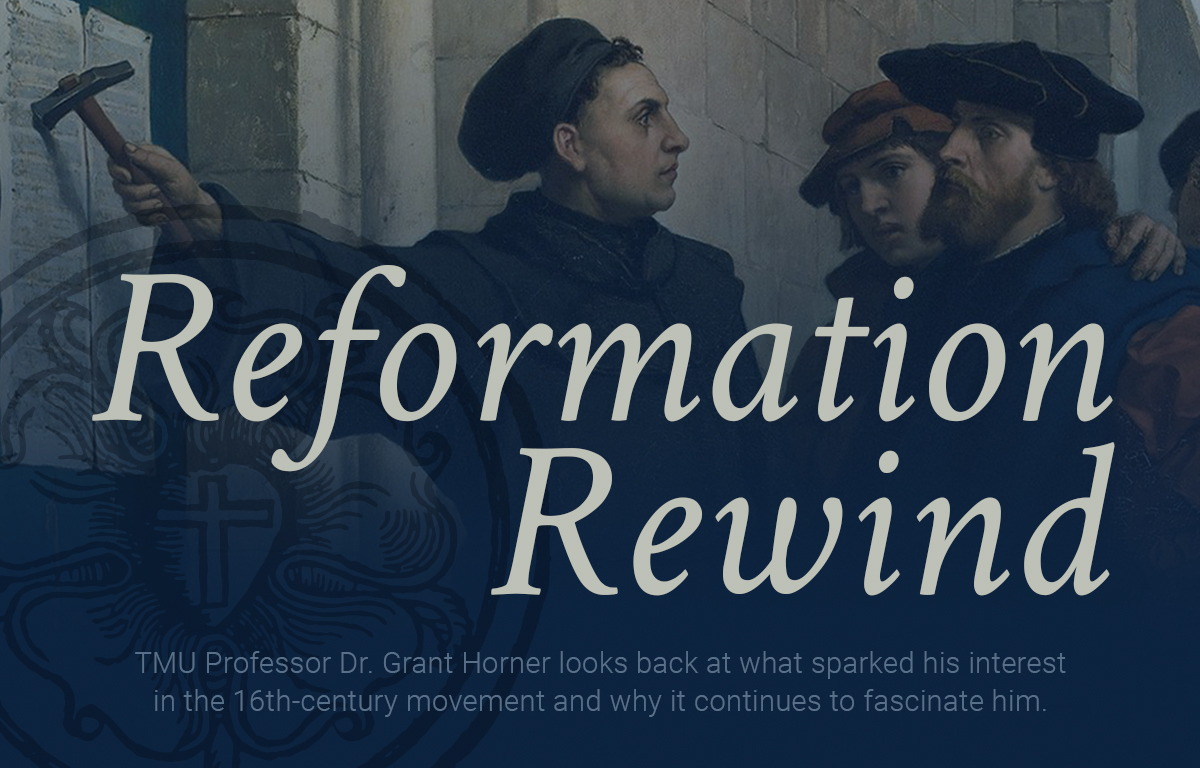 As a student, Horner trained at Duke University under Stanley Fish, the world’s most influential Milton scholar.

In 2015, long after becoming an English professor at The Master’s University, Horner published “John Milton: Classical Learning and the Progress of Virtue.”

And in the summer of 2019, Horner spoke at the International Milton Symposium in France, presenting a contrarian argument that Milton was, in fact, a Calvinist.

To truly understand Milton’s perspective in the 17th century, Horner says you need to not only study the Renaissance — an emphasis of Horner’s master’s degree from the University of Alabama — but also the theology in which Milton’s worldview was grounded.

That, among other things, kickstarted Horner’s interest in recent years in the historical theology of the Reformation.

In the run up to Reformation Day on Oct. 31 — the day Martin Luther is believed to have nailed his Ninety-five Theses to the door of Castle Church in Wittenberg, Germany, in 1517 — Horner revisited what ignited his interest in a movement that challenged traditions of the Catholic Church and elevated the authority of Scripture.

In this interview, Horner, who holds a doctorate in Early Modern literature and Reformation Historical theology from Claremont University, explained why Christians today need to understand the Reformation. He also suggested a few resources for Christians who want to study this pivotal time in church history.

**Q: What sparked your interest in Reformation Historical theology?**

A: As an undergrad, I fell in love with the Renaissance, mostly because of reading writers like Shakespeare and John Donne. When I got into graduate school, I became interested more and more in some writers, especially John Milton, because of what they were trying to do with art, literary art, and theology.

So when I teach Milton’s “Paradise Lost,” for instance — I’ve taught it at pagan universities and here at a Christian school — I always start off with emphasizing, ‘Look, you guys. You’ve got to understand: Milton does not view himself as producing a work of fiction here, with the story of the fall of Adam and Eve. Now, he’s expanding it imaginatively. It’s a wildly expanded, wildly imaginative retelling of the story. It’s based on a couple of verses in the Bible. But he believes it’s true. He believes man was created perfect and good and holy and just and wise, and that he was placed in a perfect place, and then he made a decision to disobey God in this one area of command, and now it’s destroyed all of his descendants.’

For Milton, that’s not a myth. It’s not a fable or a legend or fiction. It’s the true history of how we came to be what we are. So, I realized that in order to be a Renaissance scholar and do it well, you have to become an expert in two other areas: One is you have to become a classicist, so that’s why you study Latin and Greek and you study Roman literature and Plato and Greece. You have to become a classicist because the Renaissance is a revival of classical culture in Europe in the 15th, 16th, and 17th century. But, you also have to get to know the theology pretty well.

If you don’t have a handle on the theology, generally, and especially Late Medieval Catholic theology, and then emerging Reformation theology, starting after 1517 with Luther, then things aren’t going to make sense. You’re not going to understand why Milton goes after the Catholics so hard, because he’s a Puritan. And if there’s one thing that marks Puritanism, it’s a very strong anti-Catholic sentiment. The Catholics had distorted doctrine and distorted theology. They added church tradition to the Scripture. They came up with crazy ideas about baptism washing away your sins, and communion being the literal, physical body and blood of Christ in an Aristotelian sense.

So when people started reading the Bible again, they said, ‘Wait a minute. This may be very churchy and very religious and very beautiful, and even very moral, but this is not biblical Christianity.’

All of that stuff: Classicism from the ancient Greek and Roman world, and the revival of that in the culture of the Renaissance in Europe, and Reformation Historical theology, that’s kind of the world that I live in. You have to do all three. If you leave the theology out, you don’t understand the grounding of the worldview of the people that you’re reading and teaching and writing about.

**Q: What’s a class you teach at Master’s pertaining to the Reformation that you’ve especially enjoyed?**

A: I’ve been teaching my Calvin course at Master’s for I don’t know, a long time, and it’s shockingly popular. What students are shocked by is that he is a beautiful writer. He started off essentially as a literature professor. He’s a classical scholar, and a brilliant Latin scholar and writer, and he knows all the classical texts and mythology — the plays, the history, the literature. And he knows the ancient Christian writers. He also knows the Bible inside and out.

Calvin writes “Institutes of the Christian Religion,” which starts off as a very small book. And then over about two and a half decades, he spends the rest of his life producing longer and more detailed revised editions, until the final version in 1559. It’s the greatest Christian, literary, theological work ever written. It’s beautiful. It’s scholarly brilliance is unmatched. And it’s not what you think of as, ‘Oh, it’s going to be a dry systematic theology.’ No, it’s almost like a narrative philosophical theology where he talks about the nature of God and nature of man and the nature of knowledge.

And the students that take the class are just blown away by how beautiful, brilliant, convicting and enriching it is. It’s just amazing. It’s 1,500 pages long and we spend a whole semester on it, but it’s worth it.

**Q: Why should Christians today learn about the Reformation?**

A: Having a handle on what happens with Martin Luther and the break away from the Catholic church and the building of the Protestant churches and the Lutheran churches, the Anabaptist churches, and then later the Reformed churches with Calvin, is incredibly helpful because you learn about the lives of saints from the past. You learn about their growing understanding of biblical theology, and you see them living out these imperfect but faithful lives.

So I think it’s important to study these things. It’s good academic stuff because it’s really interesting. But I think it’s very helpful devotionally and to help you mature and become wise and to see yourself as one little bit, in one short period of time, on one continent, in one piece of the church. You’re one tiny little speck in the great cloud of witnesses. And if you think your speck is the only speck, then you’re not very wise.

**Q: What are some books that have had the biggest influence on your understanding of the Reformation?**

For Calvin, a wonderful place to start is a small little book called “On the Christian Life.” It’s about what it means to live as a fallen, but redeemed person. And it’s just marvelous.

The number one thing I’d recommend would be “Institutes of the Christian Religion.” Don’t be intimidated. Get the edition that was edited by John T. McNeil and the translator is Ford Lewis Battles. For years, Dr. Battles taught a course on Calvin’s Institutes at, I think, Pittsburgh Seminary, and it was like an Abner Chou course at TMU. It was literally people out on the balconies, wanting to sit in on it.

So those would be great places to start with primary sources from the Reformation. And don’t be intimidated and go ‘Oh, you know, I can’t read this.’ No, no, there’s great modern translations. This stuff is just real-life people trying to communicate important things in ways that are clear and simple.