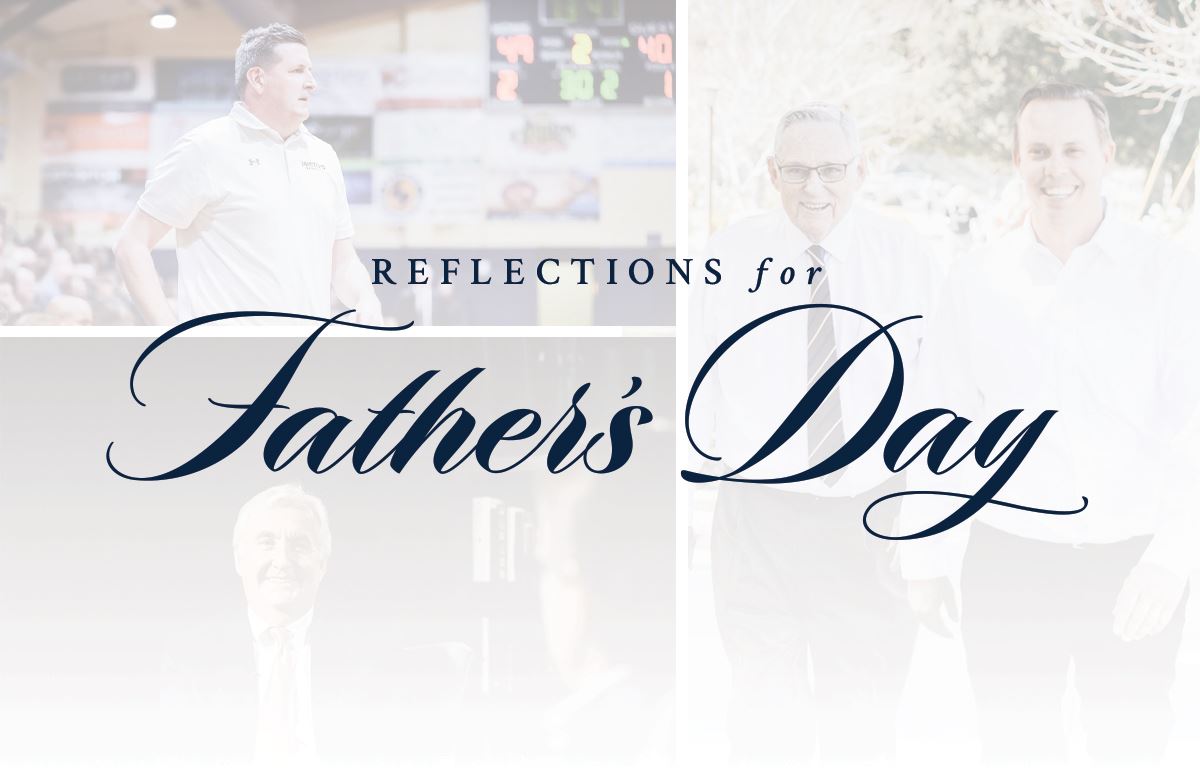 The Responsibility of Fatherhood

The pressures of fatherhood have a way of absorbing people’s thinking and sense of identity, leaving many preoccupied over how good or bad of a father they are—especially around Father’s Day. But Dr. Greg Gifford, father of two young boys and professor of Biblical Counseling at TMU, sees a different path laid out in Scripture.

“It’s interesting how little time is dedicated to the family life of the disciples and apostles,” he observes. This fact is especially interesting, since fatherhood is a tremendous responsibility—which, for better or for worse, has a significant impact on kids.

“As image bearers,” explains Dr. Gifford, “we’re going to reflect what we’re around. Our environment, our family, our culture, our society—we will reflect that to a certain degree. So, in an isolated instance, fathers are part of that equation. As an image bearer, we will reflect the dad that we’re around. If he’s a great dad, we reflect that without even thinking about it. Even just basic, silly things, like laughing at the things he laughs at, or walking like him, and having mannerisms like him. But it’s also bigger things like worldview, how we talk, and conflict resolution.”

On the positive side, great fathers give their children a pattern of godliness worth following. Dr. Gifford’s own dad was one such example: he was actively involved in his son’s life, and he modeled faithful service to the local church. This has made it easier, in turn, for Dr. Gifford to understand what it means to be a faithful dad himself.

This principle is also true on the negative side. “A really difficult experience in your family can create challenges for you. It doesn’t determine who you will be, but because you’re an image bearer, you may reflect the pattern you seen. So, if your dad was really quiet and not great at communication—well, then that might be something you struggle with. If your dad was not great at communication by being loud, or maybe angry, then that might be something that you pick up on. Conflict resolution and communication are things that all of us pick up from our families.”

Being a “Good Father”

For folks from these sorts of backgrounds, Father’s Day can be difficult. And for all fathers, the day can too easily slip into guilt over not doing more, especially in the face of how weighty the impact of parenthood is. But there is a better way of remembering the day, because the path of faithful fatherhood is not seeking to be a better father, but seeking to be a better Christ-follower.

“By desiring to follow Christ supremely, you become the best dad. In the same way, you become the best at being a sibling, or a husband, or any other role. By being a follower of Christ, and having your identity in that, your children’s opinion of you isn’t what matters most, because you’re going to be what God is calling you to be. For children living at home, there are times when you may not be their friend. You’re called to be a dad to them, and you’re doing that because you want to please Jesus. There’s going to be times where you may be in a state of disagreement with your kids, but if you’re pleasing Jesus, that’s what success in parenting looks like. And so that identity shores you up to be a better father than if being a good father is your ultimate goal.”

And because kids are so prone to reflect their fathers, the more that dads lean into being faithful and Christlike people, the better a model their kids will have to emulate.

Dr. Gifford has seen this dynamic in his own family: “Oftentimes, when I see that I’m honoring the Lord—I’m an example in my speech, I’m an example in my listening and my patience, and I’m trying to be Christlike even when I’m tired—that perpetuates its way out into my family. And when I’m not, or maybe whenever I’m too jokey, or too rough, that also perpetuates its way out into my family.”

Of course, fatherhood is still far from a simple task, even as competing responsibilities vie for a man’s limited time and attention. Being a professor and a pastor on top of being a father, Dr. Gifford knows this well. Each week requires fresh wisdom regarding where to invest time.

“There’s always that tension of balancing what God has entrusted to us as stewards, and fatherhood is just one aspect of that. It’s not the ultimate; the ultimate is following Christ, but fatherhood is one of the things that Christ has entrusted to me. So, I try to steward that along with being a husband, being a professor at The Master’s University, being a pastor at my church, being a son, being a brother. All of those things are balanced in tension, and fatherhood is one dynamic. It’s following Christ that gives us clarity and propels us to be faithful in those different spheres of life.”

And, as fathers are seeking to be faithful in all of their various roles, this faithfulness forms part of the model that their kids will naturally be inclined to follow.

However, Father’s Day is not only a day for biological fathers and biological kids. Single men and childless couples are not excluded from the privilege of parenthood, and believers from difficult family backgrounds are not bereft of fathers to be grateful for.

“Paul calls Timothy ‘a true child in the common faith.’ And I have certain members of the body of Christ that I’m closer to than my biological family. In that way, spiritual blood is thicker than biological blood,” Dr. Gifford explains.

“Spiritual fatherhood, where you’re mentoring and discipling and investing in young people, is one of the most important things we can remember on Father’s Day. Because I have spiritual fathers who have shaped my life in very significant ways, just like my biological father. And those spiritual fathers shaped who I am as a pastor, professor, dad, brother, and husband.”

“Men can shape the lives of those around them, sometimes in ways greater than what their biological father did for them. And these men can really resonate with Paul when he calls Timothy his child. And Timothy obviously had such an endeared respect for Paul, in turn.”