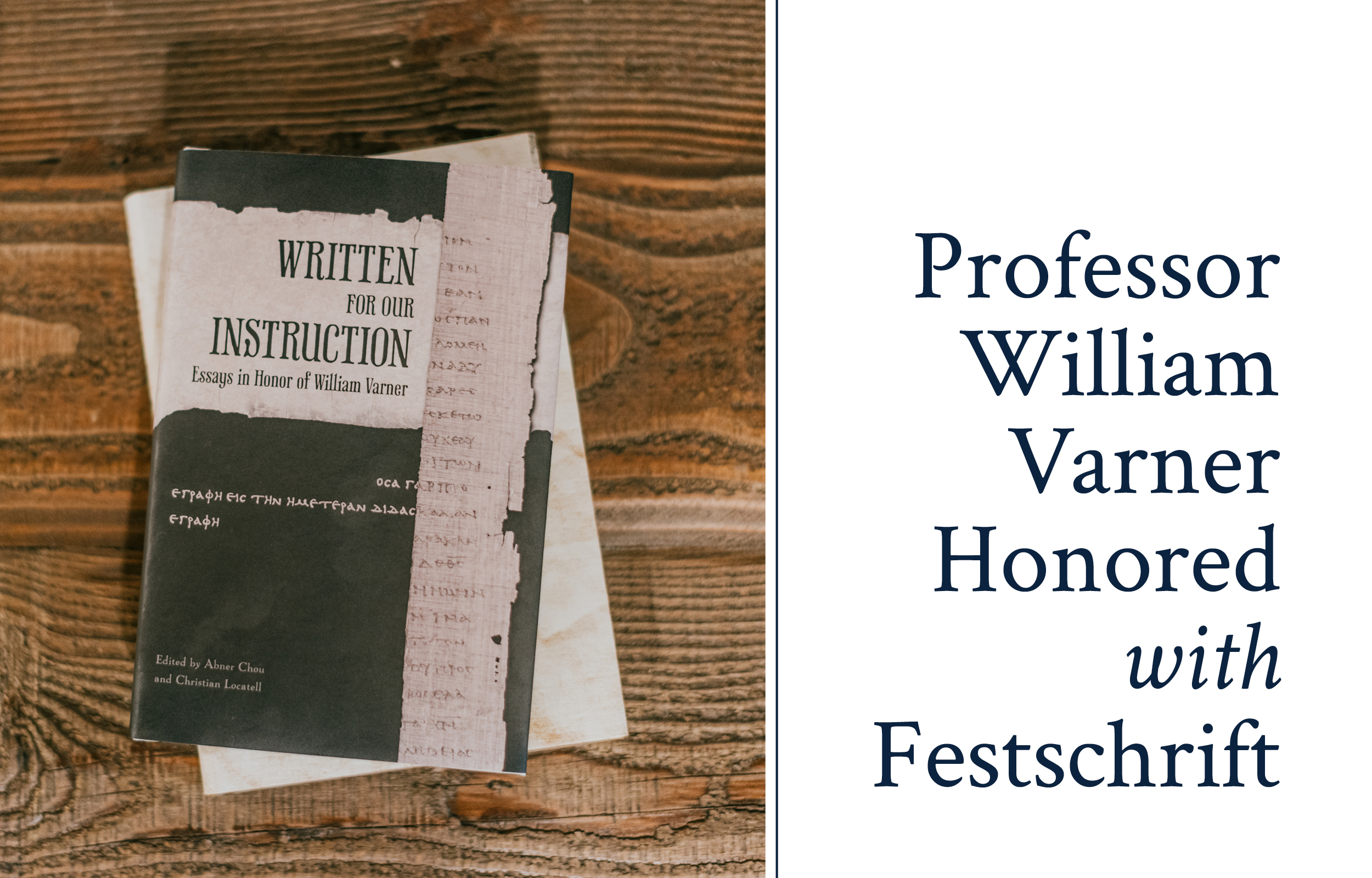 When he returned from his morning class on April 25, Dr. William Varner asked a colleague, “Am I supposed to go to chapel today?” An email had gone out inviting all faculty members at The Master’s University to a special chapel honoring them.

Jessy Heinzen, administrative assistant of the School of Biblical Studies, answered with an emphatic “yes.” What she knew, and Varner didn’t, was that the University would be honoring one faculty member in particular.

At this particular chapel, Varner was presented with a Festschrift written by former students in his honor. This remarkable type of work is a collection of scholarly articles written in celebration of someone’s contribution to their academic field. And in Varner’s case, it also celebrated something even greater: a life fully poured out for the sake of his students.

Dr. Abner Chou, president of TMU, is among the ranks of former students of Varner, who joined TMU’s faculty in 1996. Chou co-edited the Festschrift, which is titled, “Written for Our Instruction: Essays in Honor of William Varner.”

Chou says, “Most Festschrifts are written because the students feel, rightly so, a sense of indebtedness to their professor for opening their eyes to the greatness of their discipline. And often, that professor has changed their life, not just their mind. In many cases, professors set their students up for their jobs, marriages and families – they set the entire trajectory of their personal and professional existences.

“That’s what Dr. Varner did for a lot of students. So there was this great group of his former students who all emailed each other and said, ‘We’ve got to do this for Dr. Varner.’”

Everyone involved with the project managed to keep it a secret from Varner – including his wife, Helen, who had been in on the secret for the past two years. So on April 25, Varner didn’t suspect a thing when walked into The MacArthur Center for chapel.

When he walked past Helen, who had snuck into the crowd ahead of him, he didn’t notice her. When he sat down, Chou walked over, and Varner remembers Chou saying, “I’m going to call you up to the stage to help me with something.”

Varner says, “I thought maybe he was handing out awards and he was going to have me pass them out – I had no idea.”

But when Chou called Varner up, and Helen appeared out of the crowd to stand next to her husband, Varner knew “something was up.” He asked her what was going on, but she only smiled.

Then Chou said the word “Festschrift,” and Varner knew. Chou presented him with a copy of the book, and his fellow faculty members led the gathered crowd in a standing ovation.

What isn’t unexpected, however, is the desire his students have to honor him.

“And then, he invests his life in them. He spends time with them. He has them over to his home. Sometimes he holds a whole semester of classes in his home, where his wife will cook them dinner every time. The hospitality and sacrifice of that is amazing.

“Like Paul, he’s given them the gospel and he’s given them his life. That indelible impact is compelling to students. They want to honor him, because they recognize how he has shaped them in how they should love their spouses, love their kids, be involved in churches, and be involved as teachers. That’s the whole package, and that’s what he’s done.”

But even as this special chapel was arranged to honor one TMU professor in particular, it was also fundamentally in honor of all the gathered faculty. Chou sees the Festschrift project as symbolic of something bigger than one person.

Chou says, “This demonstrates the love that students have, not just for Dr. Varner, but for the whole faculty. It’s more than just Dr. Varner. This is the heartbeat of the whole faculty, and this is the heartbeat of the students. They love their professors every bit as much as those specific students love Dr. Varner. Hopefully what is conveyed through this is not just a specific relationship, but something that is true across the board at TMU: how much we as a university appreciate our faculty.”

To learn more about the faculty at The Master’s University — a fully accredited Chrisitan liberal arts college in Santa Clarita, California — visit our faculty profiles page.