Political Ramifications of the COVID-19 Crisis 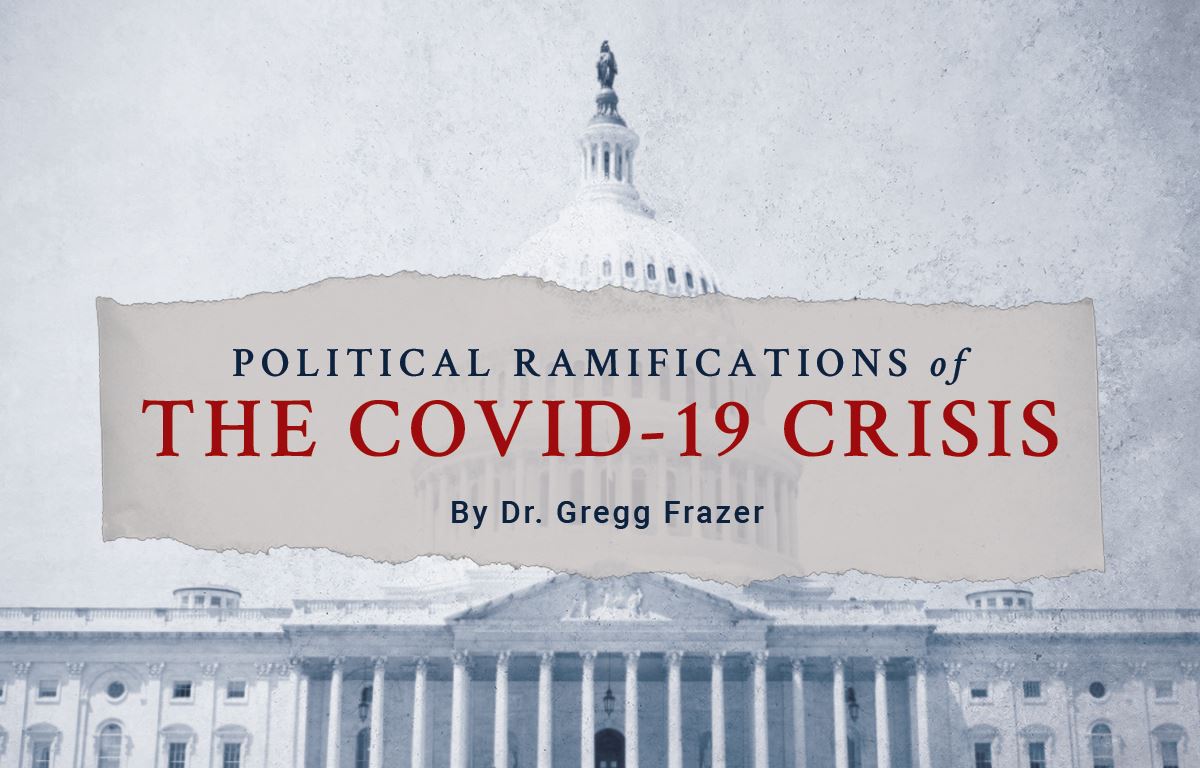 Dr. Gregg Frazer is a professor of Political Studies and serves as Dean of the John P. Stead School of Humanities at TMU. In early April, he sat down to offer some insight into the short- and long-term ripple effects of the current pandemic. He suggested ten political consequences that have already come about because of COVID-19.

“A lot of regulations have been suspended or set aside in order to facilitate and accelerate the delivery of necessary goods,” Dr. Frazer observed. “Perhaps that will cause people to wonder if those regulations are needed to begin with, and whether we should go back to them after this is over.”

Of the ten changes, Dr. Frazer sees this one as the most positive.

In spite of governmental aid, it is likely that many small businesses will shut down permanently because of quarantine. Many already have, and as a result, there is now a staggering number of unemployed Americans. Some of these people are getting hired by big businesses looking to temporarily increase their workforce.

“But all that does is transfer more power to big business in America. And it reduces competition—which has been, arguably, the engine of America’s prosperity and innovation.”

“Normally, the federal government spends about $4 trillion a year, and we just spent $2.2 trillion on one bill . . . Every American and every corporation’s tax bill could have been cancelled, and that would equal the amount of this particular bill. That tells you how massive it is.”

Dr. Frazer also pointed out that much of the $2.2 trillion went to the government, rather than to individuals or businesses.

With most public functions shut down, the Democratic candidates haven’t been able to campaign properly. This was especially bad news for Bernie Sanders. Two days after Dr. Frazer was interviewed, Sanders dropped out of the race, confirming Dr. Frazer’s belief that Joe Biden’s candidacy was a foregone conclusion.

“Because the networks are covering his daily press briefings and press conferences, he’s become a TV star—which, I would argue, paves the way for him to replace Joe Biden, if Biden goes completely over the cliff.”

National hardships are the moments in which politicians are called upon to speak most eloquently and lucidly. Joe Biden, for his part, has not risen to the challenge.

“[Our present situation is] showcasing Joe Biden’s inability to speak in complete sentences or to clearly express any ideas—which I think is going to have political ramifications one way or another, whether he stays on the ticket or whether he’s replaced.”

7. The Left’s Push for Radical Policies

In normal circumstances, there are many far-left policies that most people would never willingly vote for. But this pandemic has opened up opportunities for passing legislation that the left wouldn’t otherwise have.

“They shoved [these policies] into the $2.2 trillion bill because people were desperate. They were desperate to have the government come to their aid. And so, they were able to throw a lot of stuff into that that they couldn’t otherwise get passed—stuff that’s totally unrelated, like green infrastructure, vote by mail, and government money for abortion.”

Up until this point, Dr. Frazer had believed Trump’s reelection to be almost assured. The incumbent has a strong advantage in the presidential race—even incumbents as divisive as Trump. However, COVID-19 might change things.

“It will largely depend on the public’s view of his handling of this crisis. When there’s a crisis, the public generally (fairly or unfairly) judges a president by the way things go during the crisis.

And so, the public is watching. So far, they’ve approved of his handling of the crisis, but we’ll see what ultimately comes out of it.”

9. Spotlight on the Fallibility of Experts

In times of crisis, experts are often tempted to speak more than they know in the moment. We have seen this in recent days, with how inconsistent the information from health experts has been. Dr. Frazer sees this as proof of why public policy should not be made on the fly by such experts. The deliberative processes of our legislature are better suited to making thoughtful policies.

Of all ten ramifications, Dr. Frazer believes this one to be the most serious by far.

“We have governors, and even mayors, suspending freedom of assembly. That’s a First Amendment constitutional right. Where are they getting the authority?” Dr. Frazer also mentioned the suspension of the free exercise of religion and the closing of gun stores as other examples of violated constitutional rights.

“Ultimately, it all comes down to the danger of rule by decree, rather than rule by law.” The American government was established to be ruled by law, but that is not how it has been functioning during this crisis. For the sake of security, liberties are being suspended. As pragmatic as this approach may be in the short-term, Dr. Frazer observed that this trend can quickly enter dangerous territory.

Dire as our present situation might seem, Dr. Frazer is primarily concerned with reminding people of the most important reality:

We also know that all things—even governmental overreaches and global pandemics—work together for the good of those who love Christ.

These days, we are more aware than usual of how weak humanity is. But God is strong enough to bring about His good purposes. Resting our faith in Him enables believers to exhibit a countercultural peace in the midst of concerning times.

“We shouldn’t put too much stock in people; we should put our stock in the Lord. Our trust should be in God. And we know that He’s faithful and has everything planned out for our good.”