Looking Back on 50 Years of God''s Faithfulness: An Interview With Dr. Stead 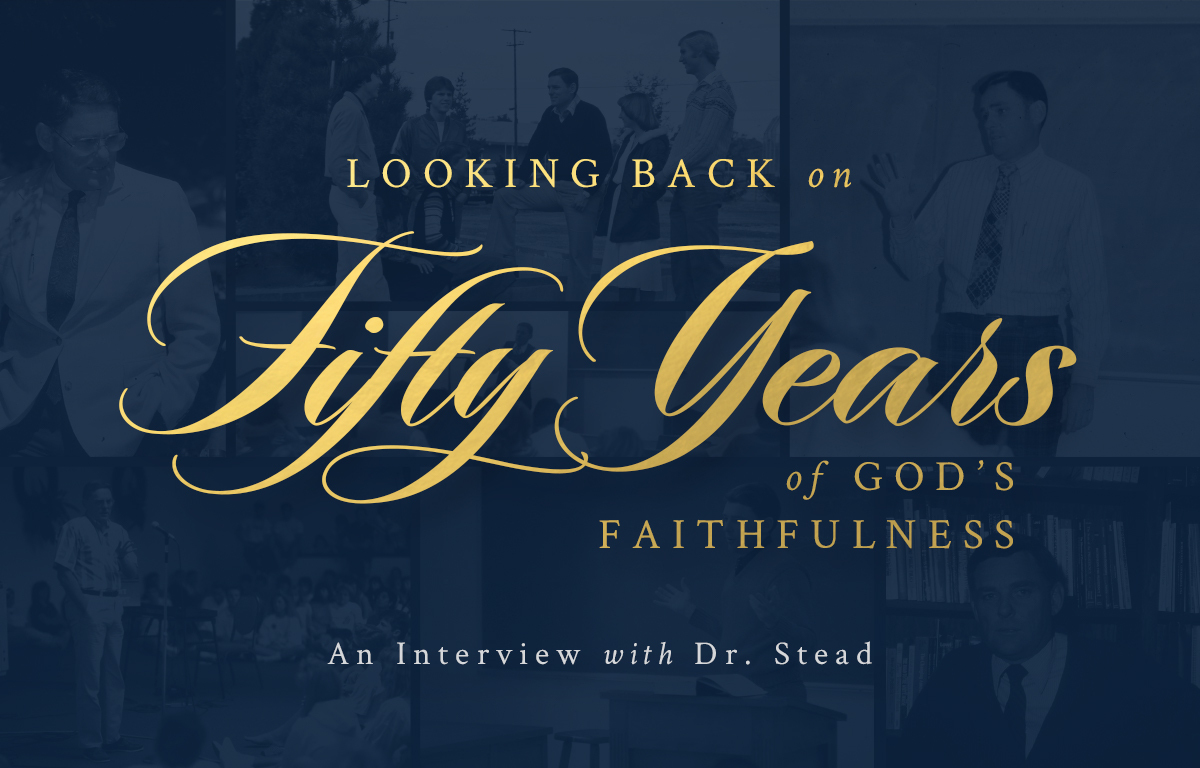 “No one is more synonymous with The Master’s University than John Stead.”

That’s what John MacArthur, TMU’s chancellor emeritus, recently said about Dr. John Stead, paying tribute to his good friend for 50 years of ministry at the University.

In the summer of 1970, Stead joined the faculty of what was then Los Angeles Baptist College as a professor of history and political studies. Since then, he’s served on both the faculty and administration, including a year as interim president. During his time in Placerita Canyon, Stead has seen the school grow exponentially, change its name twice, and welcome one of his closest high school friends, MacArthur, to the presidency.

Again and again, Stead has seen the Lord’s faithfulness toward himself, his family and the school as it remained committed to the biblical foundation that attracted him in the first place. And on the occasion of celebrating his 50th year at the institution, he graciously agreed to share his perspective on what’s been a providential journey.

“I look at my own life — my own life’s history — and I really call it His story,” Stead says. “God’s sovereign plan for me was really not my own doing.”

Even before Stead joined the faculty of LABC, the Lord was laying a foundation for his future career. After one year as a student at Bob Jones University, Stead transferred to Westmont College, where he’d been offered a scholarship. From there he transferred again, this time to Cal State Los Angeles, switching his major from history to political studies because he thought he wanted to go to law school. However, an opportunity to serve at church soon helped change his mind.

In those days, Stead and MacArthur attended the same college group in Burbank, Calif., which had about 200 students. Both men helped lead the gathering, speaking and teaching often. It was an opportunity for Stead to refine his communication skills both by practice and in watching MacArthur.

Two life-altering events occurred during this time. First, Stead learned that he loved to teach. Second, and most importantly, he met a woman named Ellen Dunkin, the daughter of LABC’s president at the time, Dr. John Dunkin. Stead and Ellen eventually fell in love and have now been married for 54 years.

Despite being what he calls a “mediocre undergraduate,” one of Stead’s political studies professors reached out to him and asked if he would ever consider returning to Cal State LA to earn his master’s degree. Stead jumped at the opportunity, as he now had a clear sense of wanting to be a professor. More specifically, he wanted to be a professor at LABC. “I was locked in,” he says.

Stead earned his master’s degree in one year and started teaching history at LABC the following year. At the same time, he was accepted into the doctorate program at USC, and Ellen gave birth to their oldest son, Jonathan, who later graduated from LABC in 1991.

“That really changed everything,” Stead says of that period of his life “From that point on, for the next three years, I worked full time while going to school full time for my doctorate.”

His first teaching contract at LABC was $6,000 a year. “We were incredibly poor. We house-sat, and I worked for a man in my church on the night shift, cleaning lavatories and waxing floors for JCPenney.”

Even still, it was clear to Stead that his work at LABC was the Lord’s will.

“It was just one answered prayer after another,” he says. “I couldn’t have ever told you that I would have been able to do all that academic work. Every one of those steps from the time I went back to Cal State LA was the Lord opening doors. So I totally give Him credit.”

In 1978, after he finished his doctorate, several senior members of LABC’s faculty recommended Stead for the position of academic dean. Even though teaching was his first love, he accepted the new administrative role and continued to teach part time.

It was 17 years later that Stead finally returned to teaching full time. Another 17 years passed before he was once again asked to return to the administration in 2013, this time as the vice president for academic affairs. In 2017, Stead shifted again, becoming the provost and senior vice president. In 2019, when MacArthur transitioned into the role of chancellor, Stead accepted the responsibility of interim president during the search for a permanent replacement.

“I had a ball being president last year,” Stead says. “The students treated me like a king. I don’t deserve it, but they’re so gracious. I had a great time working with students last semester, and I’ll always treasure that. I also had a great, unified administrative team.”

This year, Stead is serving as executive vice president. As always, he continues to teach. “I love teaching the most, even now,” he says. “I’ve always had a love for the students.”

As Stead looks back on 50 years at one school, he is aware of how unusual his career has been. “I think to myself, ‘How come you’ve been at one place for so long?’”

His answer: “The Lord never moved me.”

Stead says he’s grateful for the relationships this stability has allowed. Many of the faculty he hired decades ago are now close friends. And he still meets for coffee with several people from his church college group, who have remained in the area since the ’60s.

He is grateful, too, for the opportunity to work at a place he loves, doing what he loves.

“I’ve never worked here, ever, for the money. My self-fulfillment is in what I do, and you can’t have it any better than that,” Stead says.

As for what comes next at TMU, Stead remains confident in God’s faithful care. He watched God grow the school from 350 students in the LABC days to what it is now and is excited to see what the future holds through Dr. Sam Horn’s leadership as president.

“Great is Thy Faithfulness — that’s our song here. It really is,” Stead says.