Know the Board: John Van Wingerden 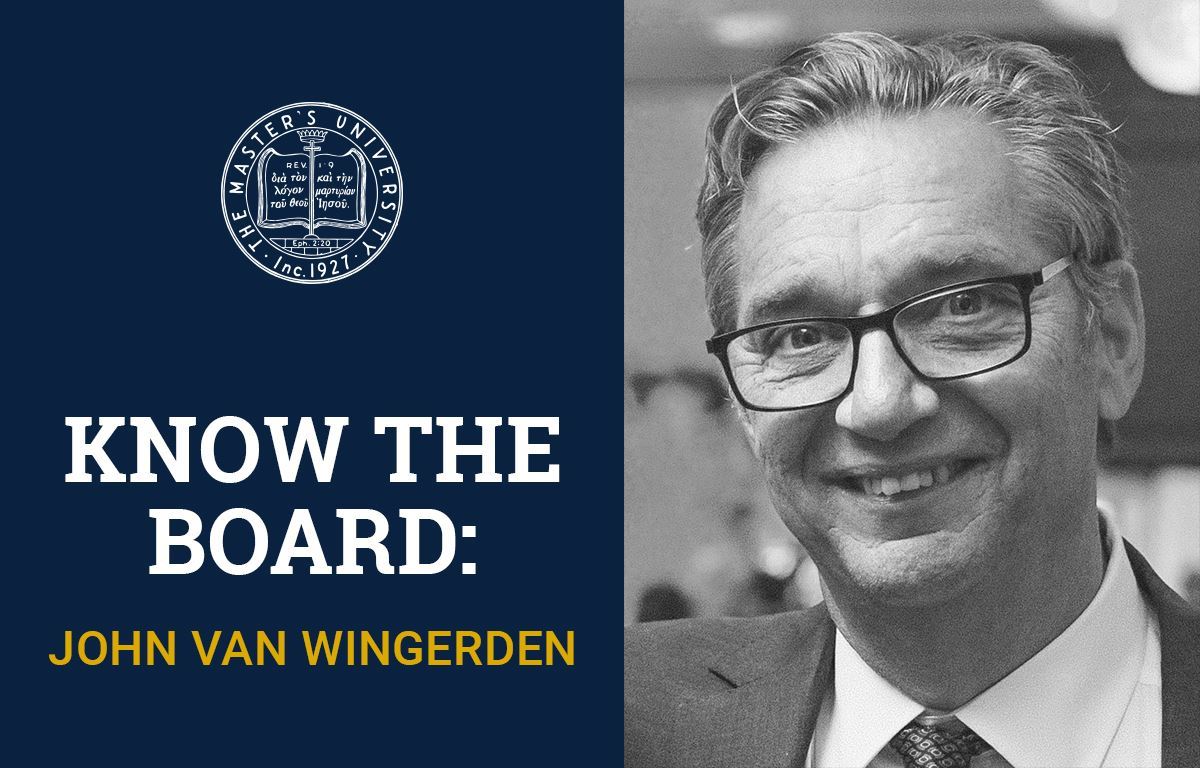 I had an opportunity to interview Mr. John Van Wingerden from Oberlin, OH last week. He has faithfully served The Master’s University as a board member for 15 years so I was excited to hear what was on his heart as he shared his vision for the school. He and his wife Dawn have greatly valued the education that each of their eight children have received at TMU. John expressed that it has been a great delight for him to see his own children deciding to send their children to TMU. Christian higher education is dear to John and he trusts that God will continue to bless the school, the students, and the faculty.

Despite John’s lack of formal education (he was a high-school drop-out), he has built a successful business over the last 50 years. Green Circle Growers is a family business where flowers (a lot of them) are grown and sold to the big-box stores everyone would recognize. John’s modesty is revealed as he says he feels comfortable being called “farmer John.” His family’s roots are in Holland where he comes from a large, immigrant family of sixteen siblings.

John’s concern as a board member is that The Master’s University continues to unapologetically proclaim and protect orthodox Christian beliefs. The board reaffirms the school’s continuing commitment to Biblical truth. John states: “We offer no apologies for our beliefs, we do not re-shape the Gospel or our message” just because the world seems to demand concessions to the Gospel in order to give Christianity a place on stage.

John was quick to balance his conviction of absolute commitment to biblical truth with a warning about the trap of legalism. We must not “major on the minors” or endorse a list of moral rules to measure true salvation. John then quoted Alistair Begg by saying, “The main things are the plain things and the plain things the main things.”

Looking forward, John observes that “We need to make the future, it doesn’t come made for us.” Each generation has to face the same urges that persuade us to weaken our resolve. “We stay relevant not by changing the message but by learning how to direct that message to the world.”

The TMU board expects and guides its students and faculty to follow their example of living a life without compromise. John says, “Students are treated as young adults and held responsible for their behavior.” A hallmark of the university is the high expectation of students to live out their faith. The school strives to help students integrate their beliefs with how they behave at or away from school, in or out of church, with Christians or with their unsaved friends and family. This connection between the student’s faith and the student’s life is taught and strengthened at the school.

I asked John if he is afraid of anything he sees in Christian higher education. He said he saw both encouraging and discouraging trends. “In the past it did not cost much to be identified as a Christian college or university.” Today, in a politically correct and indulgent culture, living in accordance with our Christian heritage causes us to stand out. Remaining loyal to the Lord and absolute truth comes with a cost in this post-modern and post-enlightenment society. There used to be cultural acceptance or general approval of Christian values and being identified as “Christian.” But now one must be prepared to defend his or her beliefs. “Absolute truth is no longer authoritative” John says. “However”, he continues, “We are held to a higher standard so we must believe and live like Christians. Western society no longer respects the Bible as uniquely the Word of God. It is merely a ‘historical book alongside other religious books.’ Moral equivalency and relativity are the new authority! Master’s equips its students with a solid foundation of biblical truth, the ability to defend that biblical truth and then share it unapologetically. We shouldn’t be known for any single social or moral cause, but for all things which stand with the literal interpretation of Scripture. Our identity [at TMU] needs to be unique.”

John’s desire is for students to be well equipped to defend the faith, yet mindful of Christ’s example of gentleness in speaking with others. We must not push people away but draw them in to hear the saving truth of the Gospel. Like Apostle Paul said in I Corinthians 9: 22b-23: “I have become all things to all men, that I might by all means save some. Now this I do for the gospel’s sake, that I may be partaker of it with you.”

John loves Charles Spurgeon, and he shares the thought: “If sinners be damned, at least let them leap to Hell over our dead bodies. And if they perish, let them perish with our arms wrapped about their knees, imploring them to stay…Let not one go unwarned and unprayed for” (C. H. Spurgeon: “The Wailing of Risca” (Sermon No. 349; 1860, at Exeter Hall, Strand). Our voice should be unwavering as we plead with people to turn from unbelief to trusting in Jesus, as Paul said in 1 Corinthians 9:19: “For though I am free from all men, I have made myself a servant to all, that I might win the more.”

Near the end of the interview, John made an insightful comment. He said “ ‘What would Jesus have me do’ is the question students should be asking themselves rather than the popular acronym ‘WWJD’.” Each student has to answer that question as they continue living out their faith after studying at TMU. John reminds us to “Bloom where you are planted”, whether God leads you into a professional career or calls you to raise up the next generation as a stay-at-home mother.

As Christians, we are all in full-time Gospel ministry wherever the Lord has planted us.