Keeping a Tradition Intact — Even While Apart 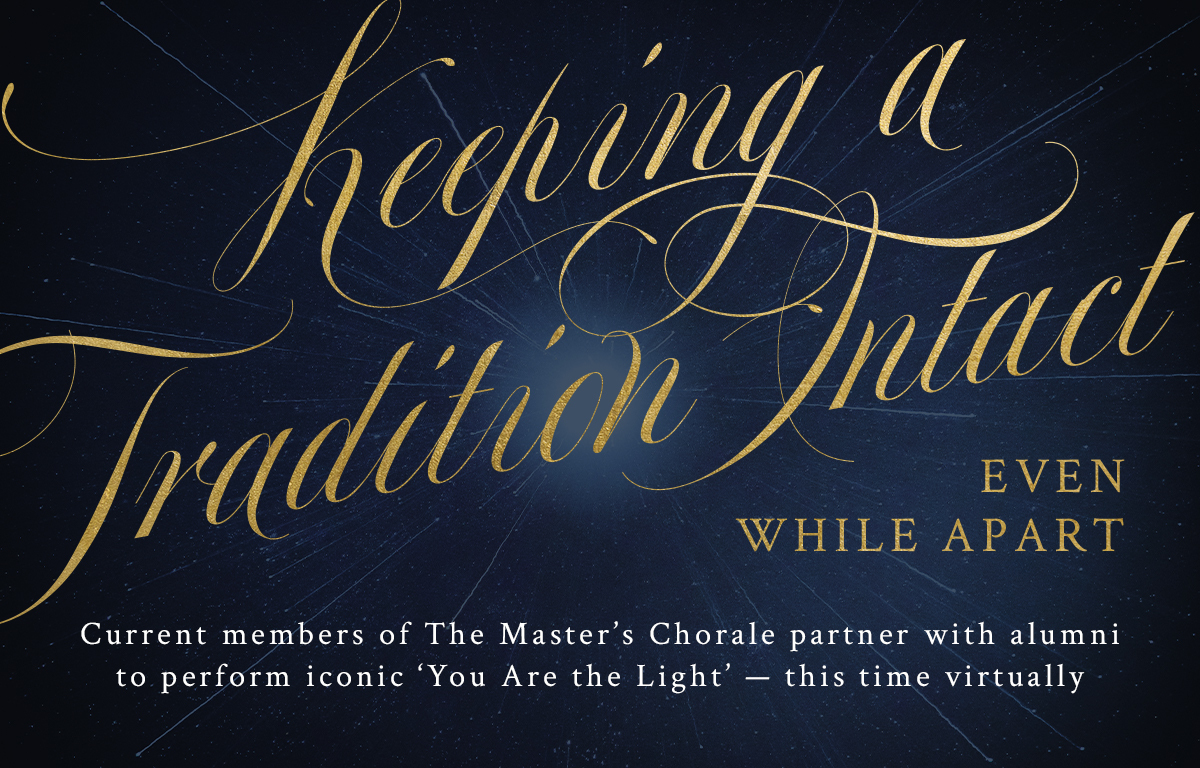 There’s a long-standing tradition within The Master’s University Chorale that when the group closes a concert with its signature song — “You Are the Light” — alumni in attendance are encouraged to stand and join in.

As a student in Chorale, Steven Inabnit remembers the feeling of watching members of the audience rise from their seats and take part in the performance.

“It’s like, ‘Oh, I’m not the first person who’s ever sung this song before,’” says the 2018 graduate. “It reminds you that you’re part of something a little bit bigger than just you.”

That’s the idea Dr. Paul Plew wants to communicate to alumni of The Master’s University this Christmas. Plew, dean of TMU’s School of Music, organized a virtual performance of “You Are the Light” that was released Wednesday on the school’s website; he hopes in a year that has been difficult and isolating for so many, the familiar faces and unmistakably Christ-centered lyrics contained in the video will “tie the alums together and encourage them.”

More than 150 current and former members of The Master’s Chorale recorded themselves singing the Tom Fettke track — with submissions coming in from as far away as Germany, England and Japan. Faculty in TMU’s music department then edited the clips together into an impressively unified production.

The project certainly had its intended effect on Inabnit, who helped make the virtual performance a reality in his current role in TMU’s campus production department.

“In the midst of COVID, when so many people are struggling with feeling isolated and separated from loved ones, I think it’s a really cool opportunity to be reminded of the fact that we can still be teammates — we can still come together and create something beautiful,” he says.

“You Are the Light” was a natural choice for the project because of its storied history and deep meaning within TMU’s School of Music. “It’s who we are,” Plew says of a piece characterized by lyrics such as, You are the hope … You are the joy … You are the song we sing.

Plew first established the song as a primary part of the Chorale’s repertoire in the late ’80s. And over the years, the ensemble has performed it in churches and schools across the United States and in venues like St. Paul’s Cathedral in London and St. Anne’s in Jerusalem.

Often, “You Are the Light” is the final song Chorale sings on its annual post-graduation tour. So, when the familiar lyrics leave a senior’s lips for the final time, the moment is filled with an added weight. It signifies the official end of his or her time at TMU.

“As we sing it for the final time,” Plew says, “I’m looking around the circle at all of their eyes, and that’s very, very emotional because they know it’s over. It’s very emotional for me, too.”

However, Plew didn’t want the journey to end there. As he searched for ways to keep alumni engaged, he believed a song so familiar and significant would remind former students of their permanent standing within the TMU family. At concerts, he began inviting alumni to stand and sing: We lift our hearts in praise … Prince of Peace, Emmanuel … Jesus Lord of love. And as Plew walked around one dimly lit concert hall or another, he’d see faces representing many years and versions of the Chorale, a testament to God’s faithfulness.

In those moments, alumni remembered God’s goodness in their lives, too.

“This flood of memories comes to their heart and mind,” Plew says, “and not only of their time in Chorale, but of the whole college experience. It’s amazing.”

At the Chorale’s annual on-campus concert in February, Plew estimates 60 alumni stepped forward when it came time for “You Are the Light” — a number that outpaced the roughly 50 students in Chorale at the time.

Plew knew he couldn’t replicate the experience during a pandemic, but he hoped to boost the morale of all of TMU’s alumni — not only those who’d been involved in music — nonetheless.

So, TMU sent out emails over the summer requesting that current and former members of Chorale submit videos of themselves singing “You Are the Light.” Included with the email was a clip of Plew conducting the piece so the various submissions could be synced up into one cohesive performance.

In Van Nuys, Calif., Danielle Bohr was happy to respond. The 1998 graduate holds fond memories of her time at Master’s — in particular, her time in Chorale. In fact, there’s a story.

During Danielle’s senior year, a student named Mike Bohr approached a secretary in the music department with a secret request: Mike asked if he could stand next to Danielle in Chorale. They’d been friends since freshman year, but Mike envisioned more, and the clock was ticking. Ultimately, Mike’s request was granted. The rest is history.

After all this time, Danielle says there’s nostalgia attached to singing “You Are the Light.” But the song also evokes more recent memories and longtime friendships that have only grown stronger since leaving Chorale. “When you’re part of the body of Christ, your friendships don’t end. They continue, and it’ll continue for eternity,” she says.

There was also a more foundational reason Danielle wanted to participate in Plew’s virtual reunion.

After being trained by Plew for “a lifetime of worship,” Danielle says she’s happy anytime she gets to sing something that so clearly glorifies Christ. “We serve an awesome God, and He is worthy of our praise,” she says.

Danielle admits she had to refresh her memory on the details of “You Are the Light” in order to successfully carry out her role as a soprano. But ultimately, she needed only two takes to record a worthy submission.

After TMU received the more than 150 videos, music faculty members Ben Mason and Scott Weber edited the final product together. Without the expertise of these two men, Plew says, the project would not have come to fruition.

“Ben and Scott and Dr. Plew and Jen Ehlen and the rest of the music department worked so hard to promote this and actually make this happen,” Inabnit says. “There was a whole team from all across campus that worked to put it together.”

Plew says the goal is to host a homecoming concert at some point in the spring semester. “Keep your ear to the ground because we’d love to have all the Chorale join us,” he says. “We’d like to have as many alums there on that day as we had on the virtual performance.”

In the meantime, Plew hopes the virtual-performance video, released two days before Christmas, will serve as a neatly packaged present for the school’s alumni to enjoy.

The School of Music is accredited by NASM (National Association of Schools of Music) and is AVID certified. To learn more, [click here](https://www.masters.edu/academics/undergraduate/music).